Condi Rice! Trent Lott! Phill Kline! Rudy Giuliani! Evel Knievel! It's a who's who of the damned for this week's Actual News! Plus a lot of stuff about Lawrence: Top 20 Other Places the Lawrence City Commission Wants to Shut Down 1. Bourgeois Pig (too pinko) 2. International House of ...

The Kansas Alcoholic Beverage Control Division (ABC) voted last week not to renew the liquor license of downtown nightclub Last Call. The city of Lawrence had argued before the committee that incidents of drugs and violence should be grounds for revoking the license, effectively shutting down the club. Representatives for Last Call argued that they were being singled out because of their predominantly African American clientÃle. The club will remain open while they appeal the ruling.*:Next up on the city commission's downtown agenda is figuring out a legislative loophole to take the "Urban" out of "Urban Outfitters."

At the behest of President Bush and Secretary of State Condoleezza Rice, Israel and Palestine agreed last week to restart long-stalled peace talks. Meeting in Maryland, Israeli Prime Minister Ehud Olmert and Palestinian Authority leader Mahmoud Abbas did not lay out any specifics as to when and how the process would commence.*:The first phase of the Bush administration's peace plan for the Middle East is to "pre-emptively invade, bomb the crap out of, and then indefinitely occupy it." When asked what the second phase would be, Secretary Rice responded, "'Second phase'?" 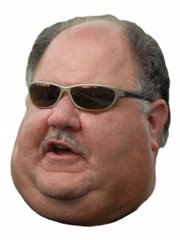 KU football coach Mark Mangino was named Big 12 coach of the year last week by both the Associated Press and his fellow Big 12 coaches. The Jayhawks' remarkable 11-1 season will be capped by the Bowl Championship Series-the Jan. 3 Orange Bowl. Oklahama earned a BCS berth, too, following its win Saturday over Missouri for the Big 12 championship. Although Missouri handed KU its only loss this year, the Tigers did not land a BCS bowl, because NCAA rules only allow two teams per conference to play in the four BCS bowls.*:Mangino expressed gratitude for both the coaching honor and the BCS FedEx Orange Bowl bid, but was visibly disappointed at not winning a spot in the KFC Sheridan's Frozen Custard Schlitz Malt Liquor Philly Cheesesteak Burger Bowl.

Kansas Attorney General Paul Morrison announced last week that the Lawrence City Commission violated open meetings laws by holding a closed-door meeting to discuss a million-dollar incentive for Deciphera Pharmaceuticals, a company in which Mayor Sue Hack owns stock. Morrison is willing to forgo prosecution if city commissioners admit their mistake and take professional training on the open meetings law.*:The training sessions on transparent government and open meetings will, of course, be closed to the public. Morrison also announced that Kansas mass murderers found to have violated genocide laws will no longer be incarcerated for crimes against humanity, but instead enrolled in anger management courses. 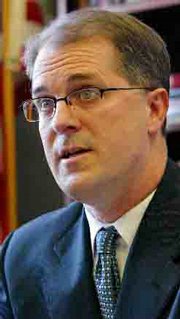 Johnson County District Attorney Phill Kline was the focus of an investigative report that claims he spent an average of only 29 hours a week at his job and did not, as required by Kansas law for the DA position, live in Johnson County. KCTV5 reported that the former Kansas Attorney General was rarely at his courthouse office and did not live at the Johnson County apartment he had listed as his residence.*:"Kline is never here," fumed a Johnson County native. "He doesn't do the job he was appointed to without an election, hasn't actively pursued his narrow political agenda of catering to religious conservatives, and has spent very little time invading people's privacy-wait, what the hell am I complaining about?"

Celebrity obituaries from last week include Kevin DuBrow, front man of '80s pop metal pioneers Quiet Riot, and Evel Knievel, legendary motorcycle daredevil of the '60s and '70s. Knievel had been in failing health for many years and DuBrow's cause of death is still undetermined.*:The loss of these two titans of American popular culture has led to flags being lowered to half mast at trailer parks and demolition derbies across the nation.

Mississippi Senator Trent Lott, who famously lost his leadership position in the Republican Party by praising the segregationist past of Senator Strom Thurmond, announced last week that he will retire before the end of the year. Lott has indicated he is leaving now to avoid legislation that would force him to wait two years before he can become a lobbyist, but his timing also coincides with a criminal investigation being launched against his brother-in-law.*:Lott dismissed the speculation about his resignation, saying that he's actually leaving to join the new Don Imus radio program. He has accepted the role of "incredibly racist on-air sidekick," and will affectionately be known as "T-Bag." 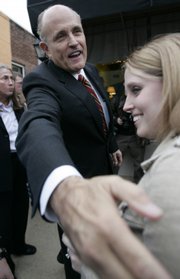 Presidential contender and former New York City Mayor Rudy Giuliani was hit last week by allegations that, while mayor, he used city funds to pay for his travel and security for an extramarital affair, then attempted to hide the costs with accounting trickery. Several sources have found that while he was cheating on his second wife, Giuliani also used New York City Police to escort his mistress and even walk her dog.*:Between Giuliani's mistress and the tax-payers who footed the bill for his trysts, auditors can't figure out who he screwed more.