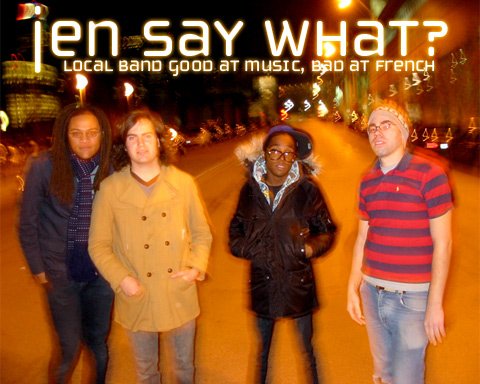 There's a certain je ne sais quoi to The Jen Say Kwahs, but they don't speak French, so no one knows how to define it. Suffice to say it's the charismatic union of four creative spirits who stumbled across each other when invited to perform a Shania Twain song at a friend's wedding. The band -composed of Martinez Hillard (voice/guitar/bass), Jeff Milberger (voice/guitar/bass), Brett Resnick (guitar/pedal steel) and Phil Canty (drums) -has pursued a much less Twainy course since then. The quartet's shape-shifting amalgam of booksmart indie rock, dance beats and genuinely moving ballads earned a runner-up finish at the recent KJHK Farmer's Ball. They'll unveil a six-song EP Thursday at the Eighth Street Tap Room, but you can catch the directors' commentary by tuning into our Ã propos podcast with the Kwahs.

There's a certain je ne sais quoi to The Jen Say Kwahs, but they don't speak French, so no one knows how to define it. Suffice to say it's the charismatic union of four creative spirits who stumbled across each other when invited to perform a Shania Twain song at ...

lawrence.com: Do you have a name for the EP?

Milberger: We're trying to decide between calling it "Fear and Magic" and just self-titling it.

I saw you last night at The Brick in Kansas City. It was an awesome show. You switch instruments a lot -I think at one point you said how big your egos were since you all had to play guitar. Is that true?

Hillard: It's the truth.

Hillard: Yeah, but he's looking to play a couple other instruments as well. Jeff and I both write songs for the band and sometimes it's really crucial that somebody is playing a different instrument. We all have our strengths and weaknesses.

And you play a little pedal steel?

Resnick: Yeah. It kind of gives a country vibe; an atmosphere.

I'd go with atmosphere.

Hillard: It adds a fifth dimension to our sound. We're a seven-dimensional band.

How did you meet and start playing music?

Milberger: The first show we played was a wedding. A friend of Martinez's got married and we played "From This Moment On" by Shania Twain.

Hillard: It's an excellent song.

Is thesistermaria (an ongoing project by Hillard) still active?

Hillard: It's never not active. The last two albums I put out were in 2005 and I did about as much touring and promotion as I could, which wasn't very much at all. I've known Jeff for quite awhile and I've known Bret for about 2 1/2 years. When we got an opportunity to do this it was a fairly easy decision.

The Jen Say Kwahs / Another Holiday

Where did your band name come from?

Milberger: I thought it up. We just couldn't think of anything else.

Hillard: We had gone through a number of other names including Shit Gold and Speedboats.

You played the Farmer's Ball recently -how'd that go?

Milberger: It was a good time.

Resnick: If we're gonna lose to one person:

Hillard: : It would be Stik Figa. I've known him since I was in 6th grade. He's a good friend of mine and a fantastic emcee/musician.

Can you tell us a bit about "All Hearts Restored"?

Hillard: Sometimes my songs get more personal than others. Especially with thesistermaria -those songs are very personal. That song was about how I was feeling at the time living in Topeka and some of the friends that I had. The first verse is very literal -it's about people who spend a lot of time bragging and talking about themselves. When you live in a small town like Topeka, it can be really depressing when you spend all your time talking about yourself and you're not really doing anything. The second verse is very literal as well, because I spent a lot of time on my parents' porch reflecting on my life and what I wanted to do with my life.

That song has the glorious fusion of disco bass and pedal steel guitar.

Hillard: Yeah. Nobody's doing that. Don't let anybody pretend to tell you that they came up with that before we did. That's all us.