What Were You Doing When Scouted: Chillin at lawrence.com-ville with my homies

Favorite clothing store? I mainly go to thrift stores to get t-shirts, and to sell clothes that I get as gifts. Target is also an old standby for clothes.

How often do you go shopping each month? Sporadically, basically whenever my clothes get holes in them.

How would you describe your style? I don't have a clear definied style, but on other people, I like a Royal Tenenbaum's/Wes Anderson movie style.

Where do you get your hair cut? Wherever's closest. Downtown barber shops. 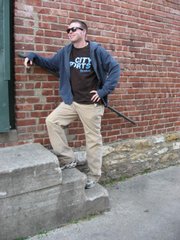 Favorite trend? For girls I like skirts and boots, and curly hair. On guys I like durable stuff like workboots and jeans. Clothing that will last.

Favorite coffee shop? Aimee's because of the Dark Irishman drink, and they make pretty designs in the coffee.

Favorite bar? I don't go to one bar consistently, but I like The Replay for their outdoor setup and there's usually an interesting crowd.

What would you like to see more of in Lawrence? A Waffle House and a Hardees. I also think there's a void in thrift stores now that the Salvation Army is gone.

Who are your fashion influences? Bob Dylan because he has cool hair and he's been wearing sharp suits lately.

Tell us a secret: When I was in 2nd grade, I put a booger on my mom's pizza and didn't tell her until after she ate it.