Why did you get into teaching?

"I heard a radio ad for a transition to teaching program at the KU education school. The program no longer exists but it took people with a math or science background, but no educational experience, and gave them a conditional license while earning a masters degree. The trade-off is that you had to work in an 'at-risk' district. So I left my fabulously wealthy lifestyle of being an engineer that spent the majority of his time at Louise's and took a job in KCK. Nothing like going to bed every night at 9 to give your life a new perspective."

"That's funny. Adults say that, but they cannot do the homework that was assigned to their seventh grader. Besides, teaching is hard because you really have to understand the material because the students will call you out when you start to BS. Being prepared takes time and planning."

Do you lust for authoritarian power?

"Authoritarian power is overrated-it is so lonely at the top. Controlling by fear only works so long and, quite frankly, it does not fit my personality. Trying that style would be an utter failure."

Are you just one of those dopey idealists? 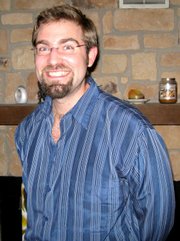 "You have to be a 'dopey idealist' in order to suppress the rational part of your brain that tells you, 'You're being paid half of your earning potential.' My undergraduate was in mechanical engineering and I did that for about four years, but I didn't feel that I was contributing to the betterment of society. So I decided that I would start commuting 10 hours a week during record gas prices and work seven days a week when they only pay you for five days. Hey, spending 25 years in Lawrence will screw up a person's priorities. But in all seriousness, I have never regretted my decision to become a teacher."

Do you actually know what you're talking about or are you just making it up as you go along like we all suspected of our high school teachers?

"I would like to think that I know what I am talking about. But a rational person judging my career choices would probably consider me insane. Besides, it's physics-it would take a pretty smart individual to catch me in a mistake."

Are teenagers hopeless, debased monsters who spend all of their time playing the Nintendos and snorting goofballs? Should we weep for this generation, or merely fret over it?

"No generation is hopeless-if you think crazy thoughts like that, why even educate the little 'monsters'? But I will say that this generation has a very short attention span, so you have to mix up the material and the learning style multiple times during the instructional hour. This generation also has a twisted sense of entitlement, stuff like, 'What do you mean that everything I do isn't an 'A'?'"

What's the best way to connect with teens? "Rapping" with them about "extreme sports" and "groovy tunes"?

"The best way is to listen to what they tell you. Ask questions, show interest. Teens will teach you a lot about yourself, society, and the pulse of the times. Just be careful when you spit back the lingo that you pick up. Make sure it is in a humorous context and the proper slang might apply."

Thoughts on "No Child Left Behind"?

"Honestly, education needs accountability, but the real question is about testing the answer. It has been pretty well documented that the Houston program, that Education Secretary Rod Paige used to help promote Bush's NCLB plan, used manipulated statistics. Stuff like 100% yearly attendance. The problem with NCLB is that schools are forced to be creative on how the statistics are reported."

When plotting to sabotage a rival school, do you prefer petty vandalism or kidnapping of staff and mascots?

"There is some rivalry between the schools in sports, but not as much as people would think. If you are going to sabotage a rival school, just remember that everything you do is on videotape at the schools in Lawrence, so it probably isn't a smart idea."

What advice do you have for aspiring learnificators?

"Have a rich daddy with connections in the CIA."