It comes at a hefty price tag, but Rock Band is destined to become one of the best party games of all time. It's impossible to not have a good time after having a few drinks and watching your friends try to sing through "Wanted Dead or Alive". This game is essentially Guitar Hero, a great Karaoke machine, and a sort of "Drum Hero" when taken individually. Put together, it becomes Rock Band, and it's the next big thing in music games.

Like Guitar Hero, this can be played by both hardcore and casual gamers. It doesn't matter if you've never touched a controller in your life. If you're capable of karaoke, you can at least do the vocal part. If you're a Guitar Hero virtuoso, you can crank it up to Expert and even try singing while playing guitar.

You may be adept at Guitar Hero or karaoke, but everyone is going to be new to the drums. Even on Easy, it takes some getting used to thanks to the bass pedal. It's not just a matter of hitting the four top drums at the right time, you have to press down on the bass pedal with your foot when an orange line goes across the screen. I thought I'd be alright starting out on Medium, but started faltering about 15 songs into the song list. A Metallica song on Medium drums is actually harder than most guitar songs on Expert. 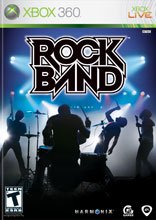 Each of the three instruments can be enjoyed by themselves, but the real fun of Rock Band comes when you get some friends together. It encourages a lot of teamwork, as a member that fails out can be saved by another if "Overdrive is kicked in. This is essentially the same thing as Guitar Hero's "star power", but with one added bonus. If more than one member uses Overdrive at the same time, you'll get an additional multiplier to your overall score.

Going through Band World Tour is a blast, but expect to play many songs multiple times. It's not just a list of songs you blow through like in Solo Tour or Guitar Hero. It features many different venues and cities, with different gigs to play in each. Some may be an individual song or two, but you'll eventually start playing longer setlists. You'll get to pick the songs in some of them, but a lot will be randomly selected. Because of this, you might have to play the nearly 10-minute "Green Grass and High Tides" many times in one sitting.

There's a distinct difference between Rock Band's setlist and Guitar Hero's. Whereas the latter specifically features guitar-intensive songs, Rock Band features more balanced selections. Something like the Red Hot Chili Pepper's "Dani California" may not feature a blistering guitar solo, but it's balanced so that all four players can enjoy themselves.

The songs range from the 60s to the 2000s, and many different styles are represented. You've got the indie Yeah Yeah Yeah's, the rap-rock Beastie Boys, punk pioneers The Clash and The Ramones, and best-song-of-all-time contender "Gimme Shelter" by the Rolling Stones. On top of that, there's already a ridiculously great selection of downloadable content. As of this writing, there are three packs that are must-downloads in my opinion. Metallica, David Bowie, and the Queens of the Stone Age have three-song packs, and the songs they picked couldn't be more perfect. I wanted to play QOTSA's "Sick Sick Sick" on a fake guitar the second I first heard it, and now I can.

My one big complaint is with the actual guitar controller. It seems solid at first when playing through easier songs, although I haven't talked to anyone that likes the lower five frets. The problems arise when you get to some of the faster, more difficult songs. The strum bar lacks any kind of "click" when you play a note, which is awkward when playing fast sections of notes. After working with the Rock Band guitar for most of the Hard setting, I found it much easier to switch back to the Guitar Hero III controller.

As a single-player game, Rock Band is comprehensive and very enjoyable. As a party game, it's one of the most entertaining gaming experiences you can have. Get some friends together (and a couple 30-packs of Milwaukee's Best) and have a blast. Just don't have it too loud around 9th and Maine, because my upstairs neighbor seems to have a real problem with the game at four in the morning.