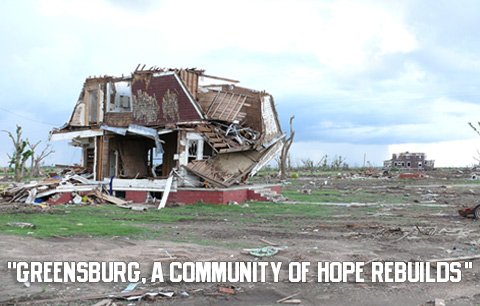 Lawrence filmmakers Eric Hyde and Oliver Hall saw the same thing as everybody else when they visited Greensburg this summer, a couple months after a tornado destroyed the town.

People and businesses were vowing to stay planted in the community and build again. Volunteers were cleaning up and raising cash. The president had visited. The phrase of the day was "signs of hope."

"We drive down there, we get there, we start interviewing people, and we're like, 'All right, this is going to be a really good thing,'" Hyde says. "'This town is actually going to revitalize and come back fast.'"

Take Dillons. One of the immediate questions in town was whether the regional chain would build a new grocery store. In July, Dillons announced it would build an addition to the Kwik Shop, which was already back in business. The store wouldn't be as big as before, but it would offer fresh meat and produce. Would everything be like this, a scaled-down version of what the little town had before the tornado?

Hyde and Hall's film, "A Community of Hope Rebuilds," is screening Tuesday at Solidarity.

Hyde, a sophomore in political science at KU, and Hall, a Lawrence resident, plan to return to shoot a follow-up, and Hyde is interning next semester with Dennis McKinney, who represents Greensburg in the Kansas House of Representatives.