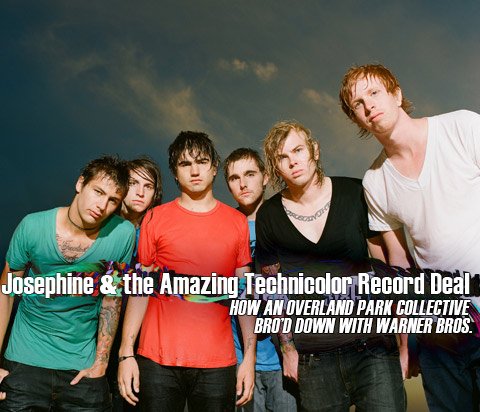 It's a testament to the friendship of Dillon DeVoe and Alexander Sandate-a.k.a. "Scam Date"-that the singing duo is able to share the spotlight in a band that suddenly finds itself directly in it. With a debut EP already out on Warner Bros. Records and a full-length due in March, Josephine Collective's six members might just find themselves on MTV before they're old enough to drink (legally, anyway).

Things started poppin' for the Overland Park band a year ago when producer John Feldman peeped their MySpace page and invited them to open for his hit-making group Goldfinger in Anaheim. The ensuing 24-hour van trip proved well worth it, as Feldman-who also signed The Used to Warner Bros.-signed on as producer. The first batch of recordings surfaced in July as the "Living" EP: four polished pop-punk tracks with bursting-at-the-seams enthusiasm and saccharine hooks.

Aside from a recent month-long tour with The Used, life hasn't changed all that much for the Josephines; DeVoe and Sandate are still kickin' it in the Central Standard Time Zone and driving to Lawrence for good times (which they did to full effect the night before our podcast). Fortunately for us, Sandate remembered to bring along his ex-girlfriend's iPod-flush with four new, unreleased Josephine Collective tracks, included in the podcast.

A few no-fi highlights from the podcast

lawrence.com: How do you make a record sound as polished as the "Living" EP? What tricks did you learn along the way?

DeVoe: There's no denying the fact that Feldman is an incredible producer. He gets sounds at that studio (at his Los Angeles home) that I don't know how he really makes. I can sit there and look at preamps all day and ask "What do you got this one set like?" and "Why does this sound fuckin' crystal clear?" But production is a step beyond me.

Did you find you had to stretch yourselves?

Sandate: Oh dude, he had us running like an hour a day up and down the hills of L.A. : You gotta be in great condition to record an album.

I didn't know there was a personal training regimen that went into making a record like this. Vitamins? Steroids?

What sort of response have you gotten from this EP?

DeVoe: It's been pretty cool. We went on tour with The Used; got to put it out there a bit more than just being in Kansas City. It was crazy to hear from kids all around that we were doing something that they liked; something they felt they could get down on or relate to.

Obviously you're probably playing for bigger crowds than you've ever played for before.

No MP3s are currently available for this album.

DeVoe: It was massive. It was amazing.

Is The Used a band that you admired before this whole tour came along?

DeVoe: Yeah, they've always been one of my favorites.

What sort of wise, sagely advice did you get from The Used?

DeVoe: Not much-just dudes hanging out on tour and playing shows.

They taught you how to bro down.

Sandate: How to what?

You know-when you get with your bros, you bro down.

How much have you guys been on the radio with this EP?

I guess I assumed that there some kind of push behind it since it says Warner Bros. on the back of the record:

DeVoe: We're not really a huge band. We're still in Kansas City pulling punches, doing what we do. We're obviously not on the radio if there's not a demand for us to be on the radio.

Sandate: Our fan base isn't enormous or anything. What we're trying to do now is just tour a lot.

DeVoe: If no one cares, then why are they going to put it on the radio? No one knows who we are. We're still young.

what is this, a wet t-shirt contest? somebody get these guys a towel!

Geesh, Hankscorpio, they are all sweaty from Bro-ing Down. Anyone can see THAT!

Glad to see the butt dart crowd get out with their posts! Show up at the Record Bar in KC Saturday night and they'll give you gender confused b-tches a tasing!

Now run to mom for some cheesy poofs!

I'm going to wait for the mp3 to come online before I start with the trash talk. BUT.... Never in my life have I been so confident that I could kick the $&!t out of someone with that many tattoos, and the guy on the right is a doppeldanger for Malachai from children of the corn. I'm going to go out on a limb here and guess the Courtney Gains look alike plays the bass.

In fact, that REALLY bad publicity photo may just be a plot to get me to go buy their CD thinking i'm going to give it away as a gag gift and in turn find a band that rocks my world (or not).

I love josephine collective.
you shouldn't judge a band like that without listening to at least 5 of their songs.

Hey kawryan what does the fact that they don't look like the N'sync boys that are postered all over your walls have to do with making Music? Giving you a chubby looking at them is not their mission...

BTW, no need to wait dipsh-t, you can go to their MySpace (myspace.com/josephinecollective), iTunes, Pure Volume, AbsolutePunk.net.

Make sure you get your parents permission first

I was at the last show these guys played with Golfinger in Anaheim at the House of Blues and they were awesome!

I had never even heard of them before that, but left there that night a fan. =)

hugo, I think that the point is that they look just like a boy band. Even without hearing their music (over-earnest, tween-baiting, saccharine, mall-punk) they still look like a bunch of ringers.

oh hugo, which band member are you? (maybe just a loyal groupie?) i guess you can pretend that the picture above is not meant to sexually arouse people, but the responses posted for this photo on their myspace page are nothing but teenage girls calling the band "hott," "sexy beasts," one girl says she wants to "have ur babies," and another notes that they look "a little wet. hot though" (so i'm not the only one who was confused - did they just climb out of a pool, or is that just a shitload of product in their hair?)

and, by the way, the majority of lawrence.com bloggers are at least a few years, if not decades older than you, so the whole "run for mom" and "ask your parents" angle doesn't make a lot of sense might i suggest you respond by citing how much more successful the band already is than they are, or maybe just by ridiculing people for spending the time to post about a band they dislike (those are more conventional replies, and, at least hypothetically, more accurate)

Weird that signing with a major label is celebrated rather than met with a look of concern. Look at the major-label signings over the last 20 years of area bands, and you won't find many, other than Chuck Mead and Shaw Wilson (BR-549), who make their living playing music...and those guys moved to Nashville before it happened. Good luck guys...I'd check out a song if there was one here.

Weird that signing with a major label is celebrated rather than met with a look of concern. Look at the major-label signings over the last 20 years of area bands, and you won't find many, other than Chuck Mead and Shaw Wilson (BR-549), who make their living playing music...and those guys moved to Nashville before it happened. Good luck guys...I'd check out a song if there was one here. The traveling sounds nice, hope it is hella fun.

Okay. I went to this myspace place after calling my mom for permission (she's 76 and has no idea what myspace is so she was totally like hells yes!) I also cleared it with my 3 kids just to be safe.

I saw hankscorpio74's post so first I went and checked out the comments on the photo... Yep. Every one is from a 15 yr old girl.

After that I went and had a listen. It's not for me, but congrats on the record deal guys. And I WILL buy your cd just to do my part to support local music. That's what I do.

p.s. I should also note that I even made reference to the redhead guy looking like someone in a move I saw in 1984. Where were you in 1984 hugo? I was must admit I just getting over the break up of Wichita's The Embarrassment, that's what us 15 yr olds did back then.

Fucking amazing that MySpace with a target demographic of 14 - 21 year old girls has comments posted by them??? How could that be that 17 year old girls are commenting on Bands on a place like MySpace?

As one poster pointed out, this area has not been the hot bed of signing activity. So for once, shut up for a second and take a look, then pop off.

These kids were excited for what this could mean for the KC music scene a year ago, now they just want to get away from K.C...

BTW, in 1984 I was graduating from College and even with all the bong hits remember Children of the Corn. Send me a pic and I'm sure I can call out some character from Breakin II that looks just like you.

Funny you should call out the Embarrassments!!! Talk about a look that fit between boy band, Beach Boys and Buddy Holly! Come on!!! Why not say you were banging away to Shooting Star if you're going there...

Final comment...Now that I ranted like a b-tch, I will speak to your aged sensibilities...This band has a plan...

You a Beatles fan? Have to love Revolver, Sgt. Peppers, the White Album of course...What people forget is the reason those GREAT musical releases occured was because of sappy, bubble gum pop like I Want to Hold Your Hand. Period. Shea sold out for Pop, not Helter Skelter...

The success and power they achieved through selling pop to the masses allowed them the position of power to make the music they wanted. It does not work the other way.

Especially when you are the first "garage band" signed by Warner in over 5 years. Not a band from L.A. or NYC or Chicago...A band from JoCo, KS. In some circles other than KS that deserves a bit of pride...

Your 49-50+ and your username has a Bell Biv DeVoe reference?