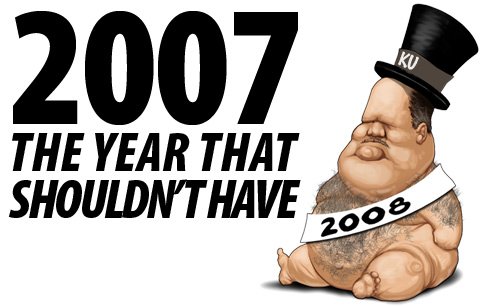 Hey, remember 2007? You know, back in the day, when silly fads like "iPhones" and "suspending the writ of habeas corpus" were all the rage? Ah, yesterday...

This New Year's Eve, as we mainline fried Coke directly into our veins, it would behoove us to pause and remember what made 2007 so great. That's right-celebrities and other newsmakers. We've compiled a list of suggested New Year's resolutions for those cultural and political leaders who made 2007 so memorable. Consider it a "Thank You" to those brave soldiers serving on the frontlines of porno-style journalism. Let's help these pillars of oligarchy make 2008 next year's 2007!

Grab a warm can of tainted Chinese dog food, fire up the white noise generator so the NSA wiretap can't hear, and enjoy our New Year's resolutions for the wretched and famous!

Hey, remember 2007? You know, back in the day, when silly fads like "iPhones" and "suspending the writ of habeas corpus" were all the rage? Ah, yesterday... This New Year's Eve, As we mainline fried Coke directly into our veins, it would behoove us to pause and remember what made ...

Mark Mangino
Resolve to stop being such a terrible football coach. 11 and 1? What the hell is that? You don't see the KU basketball team losing a game. Don't insult us with your little Kumquat Bowl or whatever the hell it is. How about a little effort next season, buddy?

Pervez Musharraf
Resolve to invest in Diebold voting machines. There are a lot easier ways to rig an election besides imprisoning the opposition and allowing your political rival to be blown up. Ever hear about purging voter rolls? Unconstitutional voter IDs that disenfranchise minorities? Push polling and whisper campaigns? Wait, let me get you Karl Rove's number-he's available now.

Al Gore
Resolve to donate your blubber to the heating oil stocks. What happened to all this "global warming" gobbledy gook you and Madonna warned us about? It's colder than a Tipper's tit outside! I don't care if "scientists" using "facts" say that the earth's heating results in more extreme weather conditions, including more intense winter storms-I was promised that Kansas would become prime beach real estate by 2025! I already leased out my apartment as a condo, you Nobel Prize winning prick!

Barack Obama
Resolve to keep talking openly about your past drug use. We all know that being a ne'er do well with a misspent youth and a history of snorting the booger sugar automatically qualifies you for the White House.

Mahmoud Ahmadinejad
Resolve to restart your nuclear program. Even though our own intelligence report says Iran stopped developing nuclear weapons in 2003, everybody knows we're going to "liberate" you anyway. You might as well save everybody a lot of time and just give us an excuse. Also, wear a tie. We prefer our Middle Eastern bogeymen to look like proper dictators-this is World War III, not Casual Friday. It's a lot harder to carpet bomb your country back to the Paleolithic when you dress like America's most beloved entertainer, Carson Daley.

Mayor Sue Hack
Resolve to look for a new job. If your goal as mayor was to promote growth-"growth" in the sense that there's now a Nixonian cancer on your office-your work here is done. With allegations of illegal backroom boondoggles, you've brought the stench of big city, Tammany Hall corruption to the Lawrence City Commission. We really are a metropolitan community!

Mitt Romney
Resolve to tattoo all of your past political positions across your body like that guy from "Memento." That way, you'll have an easy reference guide to keep your staggering number of contradictions straight. Also, in an effort to wean the U.S. off of foreign oil, pledge to utilize your hair as a limitless source of petroleum.

Roger Clemens
Resolve to work on the whole "damage control" thing. Denying steroid use while swatting at airplanes atop the Empire State Building rings a bit false, frankly. Your vehement protestations about appearing in the Mitchell Report as a human hormone warehouse would carry a lot more heft if you weren't constantly sweating horse urine.

Mike Huckabee
Resolve to keep campaigning in '08 with social and political views from the year 8.

Last Call Patrons
Resolve to stop scaring the nice white people. The Lawrence City Commission, at the behest of us concerned Caucasians, got Last Call's liquor license revoked in an effort to shut down your jazzbo sock hops. If you don't shape up, we're also going to take away your Tyler Perry movies.

Hillary Clinton
Resolve to soften your image in order to woo undecided primary voters. Wear more pastels, bring Chelsea to more campaign events:oh, and support legislation that threatens to invade only half of the Arab world. Not being loathed by 50% of the American population would go a long way, as well.

Zac Efron and Miley Cyrus
Resolve to quit polluting the minds of our children with your "High School Musical" and "Hannah Montana" drivel. Our children's minds are already polluted to capacity with lead from Chinese made toys, thank you very much.

Fred Phelps
Resolve to start picketing yourself. Your church lost a lawsuit in federal court earlier this year and now owe $6 million to the father of a dead soldier you picketed. That ruling could fairly be described as a financial form of sodomy, and your position on that particular position is well known. We look forward to your new "God Hates Freds" signs.

Rudy Giuliani
Resolve to-as president-have freaky waterboarding threes ways with Bernard Kerik and a female Winston Churchill impersonator on a multi-million dollar soundstage that recreates the World Trade Center collapse every day, then hide the expenses of these patriotic paraphilia parties in the Homeland Security budget. Be the best Rudy you can be!

Tila Tequila
Resolve to not touch anyone until you've been soaked in a boiling cauldron of Purell. You've replaced MRSA as the most infectious organism on the planet.

Vladimir Putin
Resolve to embrace the last vestiges of democracy in Russia. That way they won't squirm as much when you inject them with Polonium 210. A personal note: Please stop staring at me like a Hypnotoad on the cover of "TIME."

The Spears Clan
Resolve to apologize to social conservatives. Between Britney's panty-free cavorting and Jamie Lynn's teenage pregnancy, you've made the right wing's collective head explode as they can't decide what they hate more-female sexuality or family planning. While we're on the topic, please quit farting out a small army of losers-we already have the Kansas City Chiefs.

Michael Vick
Resolve to apply for a position with the CIA once you get out of prison. You're bound to land a job at any number of the intelligence agency's black sites if you list "Fond of torturing the f*ck out of things" on your resume. Unlike is common practice in the NFL, however, don't expect to hone your skills by watching footage of your "enhanced interrogation" performance-tapes have a habit of disappearing at the CIA.

2007 - The illustration that shouldn't have

Darron Laessig - Resolve to say no to your creative urges once in awhile. Please...