Bad: Only supports one remote at a time, fairly short, not as many extras as previous installments

When the original Warioware: Mega Microgames was released back in 2003, I was instantly fascinated by it. No other game took me from "what the fuck am I playing?" to "this game is amazing" so fast. Four years and three games later, Warioware Smooth Moves arrives for the Wii, and it's just as manic and hilarious as ever.

Granted, you won't get the same effect as you did the first time you played a Warioware game. You know the drill by now you have five seconds to do something absolutely ridiculous, and then move on to the next minigame. Lose four lives, and it's over.

Even though the basic premise has stayed the same throughout the four Warioware titles, the method of control has varied drastically. The original simply required use of the d-pad and the A button. Twisted added a motion sensor to the bottom of the GBA, and almost all of the games required twisting and turning the system. Touched made great use of the DS stylus in all of its games.

Given the developer's obvious love of alternate control methods, the Wii obviously opened a massive amount of doors. There are numerous different ways to hold the remote, and a quick slide prior to the minigame will get you prepared. You may have to put it on your head (the "Mohawk"), at your side (the "Samurai"), touching your nose (the "Elephant"), or face down on a table (the "Discard"). 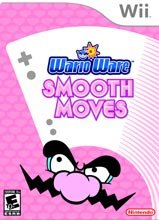 Most minigames work perfectly fine and recognize your motions accordingly. When you do a squat while the remote is on your head, the character on screen does it at the same time. There are certain instances where it's not so smooth, however. The Discard games have a harder time than others when it comes to recognizing your intentions. The "balance the broom" and "saw through the log" minigames also have occasional problems.

The minigames themselves are great fun. One of my favorites includes putting the remote at your waist, and quick-drawing and firing the trigger in a duel. Others have you collecting apples with an elephant's trunk, dancing in a ridiculous fashion, and even pulling out the Master Sword in Ocarina of Time.

Multiplayer is highly entertaining (especially when alcohol is involved), but they've made a couple questionable decisions. Why can't I play with four remotes? Is it really necessary to require passing one remote back and forth? Sure, it's fun to pass the remote around with up to 12 players, but shouldn't we at least have the option to play with more than one? A perfect example is the Balloon mode. Just like in the GC port of the original game, one player tries to beat a minigame before a balloon pops. While he's doing this, the other three players pump up the balloon as fast as possible. After beating the game, the next person steps up. In the GC version, the three people not playing the minigame got to tap A as fast as possible to speed up the process. This Wii version has no such option, even though it would be great to have three other Wiimotes in the player's hands, which they could make the "pump" motion with to fill the balloon.

It's also a bit disappointing to see the meager selection of extras in Smooth Moves. The earlier games had tons and tons of extras and trinkets to play with (especially Twisted). We only get six in this installment, and it would have been so easy to include many more. For instance, they could have expanded the "bounce the tennis ball" minigame into a full-fledged extra in which you try to get a high score.

Despite its problems, it's still a fantastic experience. The presentation and humor of the series is just as spot-on as ever, and it got many laughs out of me. Its visual style is constantly changing, which is great for keeping things from getting stale. One game might include a high-polygon model of a clerk at a grocery store, while the next might be a crude, childish drawing of a gorilla eating a banana. The hilarious voice work and catchy music is back in full-force, as well (my favorite being the song in Dribble & Spitz's level).

I may have several minor complaints about Smooth Moves, but it's still a Warioware title through-and-through. It ends quick, but I'd imagine most gamers spending the time to unlock all the minigames (not to mention putting many hours into multiplayer). It's probably one of the five best games for the system right now, and belongs in any Wii owner's collection.