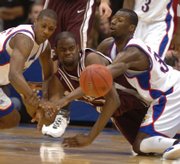 The Texas A&M men's basketball team flogged KU at home 69-66 on Saturday night, the first time the Aggies have beaten the Jayhawks since the formation of the Big 12 in 1996 (and the first time a South Division team has ever beaten KU in Allen Fieldhouse). The Aggies overcame an 11-point deficit in the second half, driven mostly by the punishing performance of Acie Law. "It's a great feeling when you beat a team like Kansas on their home floor in front of this great crowd,'' said Law, who had 23 points in the game. *...Even A&M guard Dominique Kirk believed that KU would hold on to victory following Sasha Kaun's baseline hook shot with 6:33 left in the second half that put the Jayhawks up by 10 points. When asked to comment, Kirk said of his wrathful nemesis, "Kaaauuuuun!"

AND THE AWARD FOR "BEST ELECTROCLASH UNDERGROUND BLUEGRASS SPEED-METAL SHOW" GOES TO:

KJHK 90.7 FM, the University of Kansas' student-run radio station, was nominated for a PLUG Independent Music Award in the category of best college/non-commercial radio station. KJHK was one of just three stations nominated that is entirely student-run. The PLUG Awards recognize independent music that is often overlooked by the mainstream music industry. Public voting closed Feb. 2 and the winners will be announced Saturday at Irving Plaza in New York City. *...DJ BootyKrunk (Olathe freshman Ronald Goldfarb) is preparing an acceptance speech on behalf of KJHK and will make sure to deliver it in a halting monotone replete with "uhs" and "ums" in order to maintain that indie spirit.

Twelve inch, battery-powered signs promoting the feature film debut of Cartoon Network's "Aqua Teen Hunger Force" caused a panic in Boston last week. City authorities mobilized emergency crews, federal agents, bomb squads, hundreds of police and the U.S. Coast Guard as traffic came to a halt in busy areas. Roads, bridges and even part of the Charles River were closed. The signs, resembling Lite Brite portraits of a character from the cult cartoon giving viewers the finger, had been hanging in nine other major US cities for nearly two weeks without incident. Peter Berdovsky and Sean Stevens, hired by Cartoon Network to place the signs around Boston, were arrested and charged with perpetrating a hoax. Upon being released on bail, the two men held a press conference where they would only discuss hairstyles from the '70s. Turner Broadcasting, owner of Cartoon Network, has agreed to reimburse Boston for the cost of the city's response. *...Boston officials defended their reaction, but had to cut the press conference short as a terrorist training video had surfaced from an al-Qaeda cell known only as "The Squidbillies of Holy Jihad" 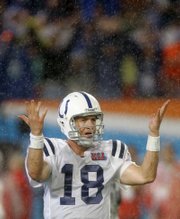 THE SUPER BOWL IS CASHED

Quarterback Peyton Manning won his first NFL championship ring as he led the Indianapolis Colts to victory over the Chicago Bears in the rain-swept Super Bowl XLI. Despite scoring an opening kick off touchdown (the first in Super Bowl history), the Bears and their ineffective quarterback Rex Grossman ultimately fell 29-17. The game was marred by multiple turnovers from both teams due to the non-stop deluge, the fist time a Super Bowl has been played in the rain. *...Commentators were impressed by the Colt's responsive defense, deep playbook and exciting gameplay-until they realized their PS3 wasn't even plugged in and that it wasn't "Madden '07."

Delaware Sen. Joe Biden, who recently launched his campaign for the Democratic presidential nomination in 2008, created a controversy with comments he made last week regarding one of his opponents for that nomination, Illinois Sen. Barack Obama. "I mean, you got the first mainstream African American who is articulate and bright and clean and a nice-looking guy," said Biden of Obama. Obama took exception to that characterization, pointing to Jesse Jackson, Carol Moseley Braun and Al Sharpton as previous "articulate" African American candidates. Biden has also come under fire in the past for his comment that "you cannot go to a 7-Eleven or a Dunkin' Donuts unless you have a slight Indian accent." *...Biden has apologized and, in an effort to display the diversity of his campaign and counter charges of insensitivity, has hired "Grey's Anatomy" star Isaiah Washington to head his Gay & Lesbian Outreach Program.

Former Vice President Al Gore was nominated for the 2007 Nobel Peace Prize for his wide-reaching efforts to draw the world's attention to the dangers of global warming. Two Norwegian politicians nominated him to the Nobel Committee, a branch of the Norwegian Parliament, which can receive hundreds of suggestions a year from authorized members. A less successful campaign for nomination was mounted by a conservative legal group on behalf of radio talk-show host Rush Limbaugh. "Rush Limbaugh is the foremost advocate for freedom and democracy in the world today," said the Landmark Legal Foundation in the press release for their nomination. Landmark is not a member of the Nobel voting body, so the Limbaugh nomination was not considered. *...Upon being informed of his nomination, Gore wondered aloud if the Nobel cash prize of $1.6 million comes on one of those big checks you get when you win the lottery, because that "would be totally cool."