The Candidate in Black

Singer-songwriter Jake Davis campaigns to save the 'heart of Lawrence'

You might have caught him performing in dives about town as folk-rock troubadour Basin, but Jake Davis is now asking for your consideration in a different venue: the political theater. Fed up with what he sees as "too much meddling" from the bureaucratic machine, he recently announced his candidacy for Lawrence City Commission. With his unkempt mane and Rasputin beard, Davis is hardly the portrait of your typical honky politician. This is Lawrence, however-where a barber is mayor and a grocery store clerk serves on the City Commission-so "atypical" may be an electoral strength. The 28-year-old political neophyte is difficult to pigeonhole and a study in contrasts: pro-growth/anti-corporatization; liberal environmentalist/libertarian smoking-ban opponent; angst-ridden musician/engineering and economics student. Jake recently stumped about his campaign in our studio.

lawrence.com: Do you think being a "rocker" will help or hurt you in the election?

Jake Davis: I think maybe east of Iowa, it will help me. West of Iowa, maybe not so much.

Has music influenced your politics?

What was the catalyst for your run?

I think the smoking ban was the catalyst, but it's not my main thing at this point. It was also the (City Commission debate on the non-binding) Iraq resolution. It was just a waste of time:a symbolic gesture. The Student Senate could have said the same thing and it would have had as much power.

The Candidate In Black

Is there any other policy that pisses you off or a particular commissioner you want to unseat?

I don't have that kind of personal animosity, I don't think. Policy issue that makes me angry? I think the way that we try to keep drawing jobs in at $10/hr or $8/hr-that living wage thing-I don't think anyone can live on that. That's what I make (working at Pearson Government Solutions) and I can barely pay my bills. I really think they're wasting the university graduates that are coming out every year. There's nothing for them here, and I know most of them would stay if there was a $30,000, $40,000 a year job they could get.

So you don't think the commission is doing enough to lure jobs and keeps students here?

No. I think they just want their housing developments, and their sprawl, and whatever makes it easier to go to Topeka or Kansas City.

Will your environmental initiatives put you on a collision course with business and development interests?

Yeah, so far it seems like the people that are really pro-growth don't like those ideas. They think it's going to slow down growth, but I tend to disagree. I think embracing technology, especially green technologies, will make people and businesses that are concerned about the public image want to come here.

What are the specific arguments the pro-growth people have against you?

They don't really have specific arguments. Mostly it's been in the LJ World forums. I've been told that Merrill in the Morning, over on the Lazer-the west Lawrence radio station-just calls me a "dirty hippie" and apparently he's called me an "idiot." I don't even know the guy-I haven't listened to the station since 1998.

You've said you want to revisit the smoking ban-are you a smoker yourself?

Yes, Bill O'Reilly! But I'm trying to quit. Actually, I don't mind the smoking ban myself, but it does hurt the businesses. 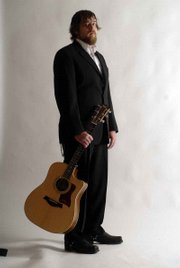 I think I just nailed you. That you're skeptical of the smoking ban, however, seems to argue against you being a "dirty hippie."

Yeah, it's odd that a lot of the more liberal people are like, "No smoking! Take away the personal freedom of someone else! But don't tap my phone and find out I'm selling drugs!" This is going to destroy me on lawrence.com, now:

You've mentioned in your platform that downtown, what you call the "heart of Lawrence," is being threatened-by what?

I think it's a lot of people who are moving here lately that are more interested in the resale value of their homes and they don't come downtown at all. They just want to go to Kohl's and they just want to stay out there. This is the old part of town. West Lawrence is new but it's having a huge influence on how the city is being run right now.

Why is Lawrence so special and why should you be its representative?

Lawrence is special because it is the little, tiny flower in a field of weeds. It's just completely different from anywhere else in Kansas. We originated with different thinkers-it was bloody, but these people were fighting for something that was important to them. I don't think anyone else running or currently on the commission listens to any of the concerns the youth and arts side of Lawrence care about. They're more corporate interest. They might have some good intentions sometimes, but it's really not working for us.