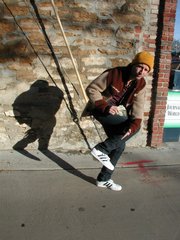 Waiting for the Super Bowl.

I like Wild Man and ATC, and APC-a French based clothing store with classic sensibilities-in New York. Salvation Army in Topeka-that's my current favorite.

Topeka Salvation Army and APC are my favorites but I frequent Wild Man and ATC the most. I also go to Checkers a lot-96 feet of meat-the most multicultural place in Lawrence. The Merc for my Kombucha. Don't forget the downtown recreation center. I am there every day, for the company and for fitness. My friends at the rec center push me to the limits of human endurance, both physically and emotionally.

Extreme WASP. I try to look the way Lindsey Buckingham's guitar sounds to me. Not too flashy. Solid. Flair when necessary. Late '70s, early '80s-I also like to look like photographs from the early '80s, particularly the washed-out Polaroids of my parents.

I like the '60s-era office suit. I don't personally own one, but the Dick Van Dyke look is cool.

Nothing I don't really like. People do their thing. It's not for me to take too much stock in it.

DIM. Do It Myself. I have my own clippers.

It would not be fair for me to answer that question. Arsaga's coffee in Fayetteville, Arkansas.

My spiritual advisor told me to take a drinking hiatus. I have temporarily (maybe) given up booze for mysticism. I spent 4 months out of 2006 developing rock and roll habits. I've opted to be less myopic in 2007. I'm getting into physics and mysticism, and where the two converge. (No joke:I think he is serious.)

More motivation and vision. Not that we are lacking these qualities, but that's what I'd like to see more of.

Less complacency. I want to see Lawrence keep swimming like a shark, nasty teeth and beady eyes. You lose one row of teeth and another one pops up!

I am happy I am an American but I am not very proud to be an American-to be the world bully. I don't think it is very sweet or a good way to foster relationships with the world. It's like we are collectively on some idiotic syphilitic vision quest.

My secret is that I am a rabid shoe collector-particularly vintage re-issues and boutique sneakers. I hope to start taking pictures and putting them on the outside of the box. Sometimes I never wear them. I'm in love with Tom Brady or have an unhealthy attraction to him.

Physics not physiques. It's all movement and motion. Trajectory baby!