Bad: Touchscreen elements, d-pad not as good as analog

Absent (presumably due to hangover): Conker

Back in junior high, the Nintendo 64 was THE system. I remember every day after school, I'd meet up at a friends and play one of the many great multiplayer titles. The usual suspects were Goldeneye, Mario Kart 64, the various wrestling games, and Diddy Kong Racing. It may not have sold as well as Mario Kart, but it featured enough original ideas to keep it from being a simple clone. With its 2007 incarnation on the DS, it adds a few new features, but many of them tend to make the experience worse rather than better.

One thing that remains completely intact is the great Adventure mode. Rather than a streamlined Grand Prix mode (such as the one in Mario Kart), DKR places you in a free roaming world that connects to several hubs. Each hub is themed and features multiple tracks and a boss race. It's not as simple as driving to the door of the race you want to participate in, however. You have to collect balloons by winning races, and each door has a minimum balloon level on it. After completing all of the races within a hub, an added objective will be added to the races ("get all the golden balloons and finish first").

My favorite aspect of Diddy Kong racing is the inclusion of three separate vehicles. You can choose to race either in a kart, a plane, or a hovercraft. Many of the courses are well-suited for each of these vehicles. The plane is great, but I've always had a bit of trouble when it comes to steering the hovercraft. Plane control worked well with the Nintendo 64 analog stick, but the DS's d-pad makes things a little more clunky. 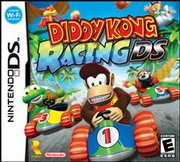 There are a wealth of extras, and many of them are attained by collecting the coins scattered throughout the tracks. Take these to the magical floating elephant that flies around the overworld, and he'll grant you "wishes." These can be performance enhancements for your vehicle, or extra little bonuses like customizing the banners on the tracks.

Thankfully, the focus is purely on racing during the online bouts. The matchmaking works well, and I only experienced a couple hints of lag. You can choose to race with either 2, 4, or 6 players in either Single Race or Trophy Race mode.

The DS has proven its ability to recreate 64 games, so it's no surprise that DKR looks just as good as it did on the big(ger) screen. However, that still puts it behind other titles on the handheld, notably Mario Kart DS. Everything is still vivid and bright, but there's really nothing terribly impressive to be seen. All of the music is actually very catchy, and the sound effects are passable.

Unfortunately, Conker has sat this one out. It's probably (nah:obviously) due to his liquor and whores-filled adventure in Bad Fur Day, but that doesn't make it any less disappointing. Regardless, Diddy Kong Racing is still a decent racing game:it's just unfortunate that Rare decided they had to force some touchscreen/microphone minigames into it.