Bad: Some framerate drops, far too many fouls,

Lawrence obviously has a ridiculous obsession with KU basketball, so NCAA March Madness '07 might be of special interest to them. In some aspects, it's an impressive sports title. Unfortunately, it suffers from a couple significant flaws that detract from the experience.

While it's no fault of the game, none of the players in the game bear even a passing resemblance to their real-life counterparts. Because of the legalities involved with college athletes, the game isn't even allowed to present their real names. Therefore, be ready to control "SG #3" instead of Russell Robinson.

Thankfully, there are no such restrictions on courts, as Allen Fieldhouse looks almost perfect. There are only a few very minor inaccuracies to be found. While the student section is correct, the home/visitor benches are switched around and the band is on the wrong side. It also shows students standing on the court behind the baskets. Other than that, it's a picture-perfect representation of the Fieldhouse.

Gameplay is a mixed bag, but there's not quite enough polish to make it a great college basketball experience. The main offender is definitely the overabundance of fouls, which can become infuriating. Simply attempting steals or blocks will oftentimes send the other team to the free throw line. Having Sasha Kaun's doppelganger get fouled out in the first half is never good. 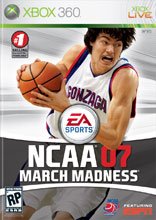 One of my favorite aspects of the gameplay is the utilization of the right analog stick. Simply flicking it in any direction will add a little flourish to your dribble and usually confuse your defender. Shooting and layups are mapped to different directions, so there shouldn't be many instances of confusing your intentions.

The season schedules aren't accurate, but it is split into conference and non-conference play. At any point during your season, you can check the "Tournament Watch" menu to see what teams are on the bubble, and which have tournament locks.

There are many moments within the game that will determine the composure of your players. Depending on how well you're playing, your team will get fired up and play better or downtrodden and make more mistakes. If you continue playing well for a period of time, you'll be able to activate an "Impact Moment." At this point, you assume control of a player and run around the court. You can pump up the crowd by dancing with the Jayhawk, the cheerleaders, riling up the crowd, or taunting an opponent. A nice little touch is the loading minigame that awards more "intensity" to the winner.

Even though they don't resemble the actual players, the actual character models are well-made. More impressive is the crowd, which eschews the standard "mass copy-and-paste" method most sports games do. The people in the stands are varied, and many of them will be animated completely differently than the rest of the pack. You'll even hear the "Rock Chalk Jayhawk" chant near the end of winning games.

I hope you can stand a lot of Dick Vitale's hyperactive enthusiasm, because it's here in spades (I've heard the phrase "dipsy-doo dunkaroo" more times in the last few days than I ever care to again). If you can deal with that, it's actually an impressive audio presentation. Marching band music sounds great, although I think they have a bit of a Doobie Brothers obsession thanks to the inclusion of both China Grove and Long Train Runnin'. It also features a hilariously awful EA Sports song from time to time, which is about as out-of-place as the similarly awesome Donkey Kong rap from DK 64.

The main complaint most people will have with this game (and any college sports game) is clearly an unavoidable one. As rabid as KU fans are, I have to imagine that they'll be disappointed by the absence of Julian Wright, Brandon Rush, and the rest of the team's likenesses. It's obviously no fault of the game, it's just an unpleasant legality. If you're fine with that, the great representation of Allen Fieldhouse and the rest of the nation's arenas should help hype you up for the tournament.

Odd that their likenesses can't be represented well. The College Hoops 2K series has always tried to use the model that most resembled the player that it is supposed to represent, which they are perfectly allowed to do. In fact, the only thing they're not allowed to use is their names, but using their jersey numbers, stats, hair styles, etc. is all fair game. And while getting an NCAA license to produce a college basketball game does not give them the rights to use the coaches names and models, they did manage to sign several hundred of them to deals allowing this use, probably for little or no fee. (Except in the cases of a few of the big boys, like Roy for example)