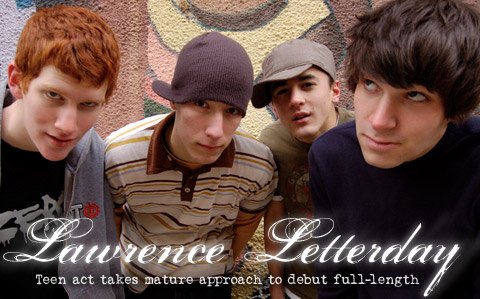 The soundtrack to the cable-TV movie "High School Musical" was the biggest-selling album of 2006.

But one group of local students proves there's more going on in the halls of Free State High School than just pop songs about togetherness and basketball.

"People freak out about 'High School Musical,'" admits Isaac Flynn, drummer for Lawrence Letterday. "But Free State has a lot of people who like a lot of weird music, too."

The members of Lawrence Letterday are taking advantage of that open attitude. In the nearly two years since they formed, they've already become a cornerstone of their school's music scene. They'll push the boundaries even further when they introduce their debut full-length, "Until This Girl Goes Home," at a CD release party at The Granada.

Quite an accomplishment for a group composed of 15- and 16-year-olds.

Flynn says, "People can relate to us regardless of their age. As goofy as it sounds, my mom likes our band."

Their album delivers 12 original songs that would not seem out of place on the stages of the Warped Tour or on the soundtrack of an Adam Sandler movie. The band opts for tight, catchy tunes that are slickly produced and performed.

"We started off really pop-punk. Now we're making that transition to indie/pop-punk. Your tastes are always going to change," Flynn says.

"We used to listen to Blink 182 all the time," adds singer-guitarist Ben Kressig. "And that's all we sounded like. Now we don't really sound like that anymore."

Kressig cites bands such as Green Day and Lawrence's Get Up Kids as their current influences. But they also enjoy bygone (though recently reunited) acts such as The Police.

Flynn says, "We play 'Message in a Bottle' on Guitar Hero all the time."

The group - which is rounded out by guitarist Zach Mehl and bassist Matthew Green - spent three months recording the new disc each day after school.

Until This Girl Goes Home

Unlike the dismissive parents depicted in most TV movies about young rockers, the parents of Lawrence Letterday members were more than just encouraging about the project, they were crucial to the process.

"My dad gets us all kinds of gear," says Flynn, whose father, John Flynn, is the longtime manager of Mass St. Music, 1347 Mass. "We recorded the whole album with a ProTools setup and studio he was going to use, but it was conveniently located in my basement."

The quartet's parents have also been quite useful when the band performs out of town.

"Me and Matt are the only ones who can legally drive," Kressig says. "Our parents help drive us to (gigs in) Springfield and Joplin and Omaha."

At most of these shows, Lawrence Letterday plays with acts whose members are all over 21. So far, the musicians say their age has not hindered them from getting booked. However, landing a national record deal is another story.

"We've had a few record labels that show interest," Kressig says. "But they'll say, 'You guys have never gone on tour. You're too inexperienced. Wait until you're 18, then talk to us.'"

Flynn adds, "Either our age helps us a lot or it brings us down."

"Their motivation and drive to accomplish something and go after a goal and a dream is substantial," says former Paw guitarist Grant Fitch, a veteran Lawrence musician who advises Lawrence Letterday on occasion.

"First and foremost, they just want to be a really good band."

Fitch helped the ensemble concoct the idea for Lawrence Letterday Fridays. Beginning monthly in March, the group will recruit some of the area's best young talent to join them at The Bottleneck, for an all-ages showcase.

"The goal of it is to really create a scene for the kids around Lawrence and make it cool to go to shows again," says Flynn, who hopes to feature "underground indie/pop punk/alternative bands."

The crew felt the need to find ways to entice classmates to embrace live music.

"High school kids support you a lot, but it's also really hard when you are going to play on a Monday school night," Flynn says.

While Lawrence Letterday is pressing an initial run of 500 discs of "Until This Girl Goes Home," the goal is to one day get the album out to the rest of the nation - kind of like that "High School Musical" soundtrack.

"People have mixed feelings about our band name," Flynn says. "But one of the reasons we chose it was if we ever got out of Lawrence, people would know where we're from."