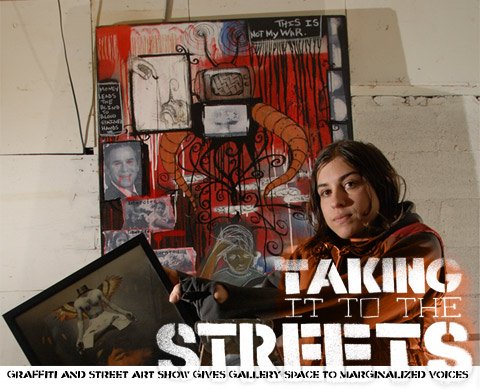 A VISION:walking into a small room behind the anarchist bookstore, stepping onto some weird spray-painted floor:

:is in the Streets:

This, if all goes as planned, is what the old storage room behind the Solidarity! Revolutionary Center & Radical Library-last week mostly bare and white-will resemble Friday for the opening of the free "Our Power Is in the Streets" graffiti and street art show.

In the first of what organizers hope will be many shows, street art will be celebrated in all its raw, illicit glory-harnessed and corralled into this cramped, 16-by-17-foot space.

The first and most obvious challenge to holding a street art show in a room is that a room is not the street. A degree of translation must take place.

For instance, with limited wall space, Dave Loewenstein-probably best known for his murals-is spray-painting a series of stencils on the floor.

"I don't know how many artists, besides folks who would be involved in shows like these, would want their art stepped on," organizer Dave Strano says.

Even though some of the works are a couple full steps removed from street art-a ballpoint pen drawing is one example-the roots are the same, says Jeremy McConnell, whose Kansas City group Hip Hop Academy is contributing to the show.

"Our Power is in the Streets" graffiti and street art show

"Almost every artist in this show has experience doing street art at one time or another," McConnell says, "whether they're still doing it or have done it in the recent past."

Luke Rocha, for instance, started out spraying graffiti in Kansas City before turning to forms such as collage, one of which will be in the show.

"Graffiti doesn't really work in galleries," he says. "So you have to present your art in a way that it could show in some kind of gallery format."

Some of the pieces are rawer. Jordan "Scritch" Ferrand-Sapsis has a few years' experience in street art, but has never had a gallery exhibit. Scritch says she ran with a crew dotting the streets of New York City with anti-war posters and stencil graffiti before coming to Lawrence two years ago. She helped organize the show and will contribute a couple of stencils on canvas.

In the end, the difference between this so-called street art show and another "edgy" exhibit may have more to do with whom the art is coming from than how it looks.

"It's coming from usually the most repressed sectors of the society," organizer Strano says. "You sometimes, but very rarely, will run into an upper-middle-class art school kid stenciling around town. It definitely happens, but I think most often what happens is that it's an outgrowth of social ills and people trying to reclaim the spaces that have been so taken from them."

The spirit of street art-a grimy, often angry, agitative one-is what separates it from traditional art, artist Rocha says, and it's also what keeps it out of galleries and mainstream art culture.

Our Power Is in the Street 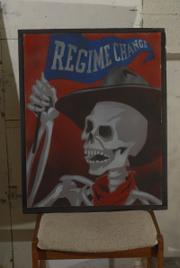 "To me the truest form of it is the illegal form," he says. "That's where the edge is. It became real sugarcoated over the years-you see it in commercials and on jeans and all that stuff. That kind of got me out of the whole thing."

Affirming the power of graffiti, Strano points to the May 1968 uprising in Paris, in which a protest that started with a group of anarchist students grew into a large, countrywide movement that temporarily immobilized the French government. Central to the rapid spread of the uprising's scattered ideologies was an explosion of graffiti and posters touting outlandish slogans such as "read less, live more" and "Let's be cruel!"

"It's an extremely accessible form of expression," Strano says, "specifically when you're talking about political ideas. It's really easy to get an idea out there really fast and easily."

Scritch adds, "For a lot of street-level organizations, whatever their cause may be, however they choose to identify themselves, they're gonna use the tools that they've got-and those are pretty meager resources and the streets. It doesn't take much to cut a stencil and get some spray paint."

If Solidarity's upcoming show isn't likely to incite a citywide uprising, it will at least inspire regular folks to spread their messages in the streets of Lawrence, Scritch hopes.

"It ties into the idea of street art being a reclamation of public space, and how that can be kind of a revolutionary act in and of itself," she says, "to take space back that's been commodified for commerce or whatever and turn it back into a community space based on how we want to see it."

With the Olive Gallery set to close at the end of the month on the heels of several other gallery closings, there is a sudden lack of space for local artists-particularly, with the Olive's closing, for those who occupy less-than-elite circles.

"We were talking to Dave Loewenstein and other artists," Strano says. "Not only was there a void-lack of space-but there also was a lack of accessible art, more art that wasn't really accessible to working-class people, and art people can relate with who aren't just art school kids."

And if this leads to a proliferation of pranksters defacing public buildings with wheatpaste posters and graffiti, Scritch says, more power to them.

"Honestly, I wish there was a stronger community of folks who are interested in this," she says. "There are a lot of really talented folks in this city who have a lot to say, and it'd be great to see them really getting out there and doing stuff."

Holy crow...Jim Mahfood? Too bad I gots another art show to go to on Friday. Sadness.

And I'm glad someone mentioned that street art doesn't really belong in a gallery. But if anyone's gonna do it, it should probably be Solidarity.

The background piece is by Trenton Matthews!!!! Not Mayor! Thanks a bunch!......yo