THE PENTAGON PREFERS TO CALL IT "GHETTO FABULOUS"

Outrage mounted last week over the Washington Post's revelation that hundreds of wounded veterans were being kept in squalid living conditions at an outpatient facility in the Walter Reed Army Medical Center. Walter Reed, located in Washington, D.C., just five miles from the White House, has been keeping the overflow of physically and psychologically damaged soldiers from the conflicts in Iraq and Afghanistan in decrepit off-site facilities. One site, known as Building 18, was found infested with rats and cockroaches (with vermin feces throughout the building), black mold on crumbling walls and ceilings, and dirty furnishings. Secretary of Defense Robert Gates called it an "unacceptable situation" and was "thoroughly disappointed we did not identify it ourselves." Congress will begin holding hearings on the scandal within the next week.*:Injured soldiers, while still not receiving the medical attention they need, have been moved into windowless huts built entirely of "Support Our Troops" car magnets. 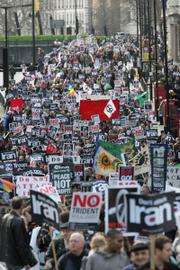 Prime Minister Tony Blair last week announced Britain will withdraw about 1,600 troops from Iraq over the coming months and hopes to make other cuts to its contingent of 7,100 by late summer. Nevertheless, thousands of anti-war protesters marched through central London Saturday to urge Blair to withdraw all of Britain's troops from Iraq and voice fears over a potential conflict with Iran. Britain's announcement came on the same day Denmark said it would withdraw its 460 troops, all while the U.S. is implementing an increase of 21,000 more troops. South Korea plans to halve its 2,300 troop force by April, and is under pressure from parliament to devise a plan for a complete withdrawal by year's end. Polish President Lech Kaczynski has said his country's troops would stay no longer than December. Vice President Dick Cheney said that Blair's planned withdrawal is a sign of progress in Iraq. "Well, I look at it and see it is actually an affirmation that:things are going pretty well," he said.*:The Bush administration's "Coalition of the Willing" in Iraq now consists mostly of Palau and the Republic of Cooterstran (which is a guy who declared himself to be an autonomous nation-state so he doesn't have to pay taxes on the Confederate flags he sells in the Wal-Mart parking lot).

International animal rights organization PETA has made public a letter it sent to Kansas State University President Jon Wefald complaining about throwing of at least three live chickens on the basketball court prior to last week's game against Kansas University at Bramlage Coliseum. Describing chickens as "very intelligent and inquisitive animals," Vergerio said the chickens appeared to have been subjected to "deafening noise, bright lights, terror, abusive handling and likely death for the sake of amusement," a practice the group characterized as "needless and deplorable."*:PETA remained curiously silent, however, on the cruel and inhumane treatment inflicted upon K-State's basketball team at the hands of the Jayhawk's for the past 24 games.

The presidential campaigns of Barrack Obama and Hillary Clinton exchanged a very public tit-for-tat last week over the comments of a former Clinton backer who now supports Obama. Music industry mogul David Geffen, while at a fundraiser he helped organize on behalf of Obama, said of Clinton's vote to allow the President authorization to invade Iraq: "It's not a very big thing to say, 'I made a mistake' on the war, and typical of Hillary Clinton that she can't." He also called Bill Clinton's behavior while in the White House "reckless." The Clinton camp immediately called on Obama to denounce those comments as personal attacks. "It is ironic that the Clintons had no problem with David Geffen when he was raising them $18 million and sleeping at their invitation in the Lincoln bedroom," responded an Obama spokesperson. Both candidates refused to personally comment on the campaign tussle.*:Meanwhile, fellow Democratic presidential hopeful Joe Biden continued his not-so-public battle against irrelevancy.

Terminator and Titanic director James Cameron has produced a new documentary that contradicts major Christian tenets. "The Lost Tomb of Christ," which is set to air March 4 on the Discovery Channel, argues that 10 ancient ossuaries discovered in a suburb of Jerusalem in 1980 may have contained the bones of Jesus and his family, according to a press release issued by the Discovery Channel. One of the ossuaries bears the inscription, "Judah, son of Jesus" (see photo), suggesting that Jesus may have had a son. And the very fact that Jesus had a ossuary storing his remains would contradict the Christian belief that he was resurrected and ascended to heaven. In 1996, when the BBC aired a short documentary on the same subject, archaeologists challenged the claims. Amos Kloner, the first archaeologist to examine the site in question, said the idea fails to hold up by archaeological standards but makes for profitable television. "They just want to get money for it," Kloner said.*:Cameron is already working on the sequel to "The Lost Tomb of Jesus," where Sigourney Weaver combats a cloned army of Jesuses on a spaceship. 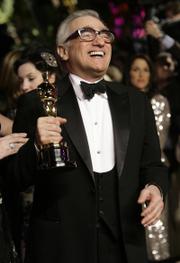 After six nominations and 26 years, the 79th Annual Academy Awards was finally the occasion for Martin Scorsese to pick up an Oscar. Scorsese won Best Director for "The Departed," which also won Best Picture. Helen Mirren won Best Actress for "The Queen," Forrest Whitaker won Best Actor for "The Last King of Scotland," Jennifer Hudson won Best Supporting Actress for "Dreamgirls," and Alan Arkin won Best Supporting Actor for "Little Miss Sunshine." Al Gore became the first Vice President of the United States to accept an Oscar when his film, "An Inconvenient Truth," won Best Documentary.*:Host Ellen DeGeneres managed to bring the broadcast in at a manageable length, mostly because her "jokes" did not require any extra time for laughter.