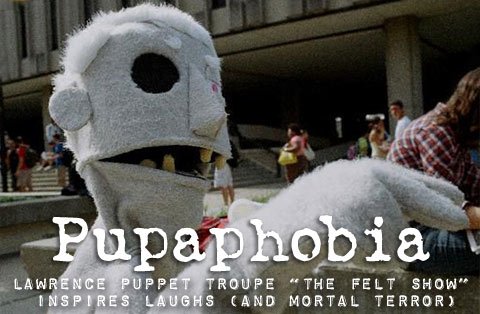 "The Felt Show" began life as a guy with a puppet making people feel vaguely uncomfortable in area bars. While this sort of behavior would normally result in a public indecency arrest, writer and director Paul Santos has parlayed it into a surreal theatre spectacle. Teaming up with artist-cum-Geppetto-on-smack Ben Rumback, the two have shepherded their fabric-swaddled sketch comedy from confusing opening act for local bands to big production headliner. The original incarnation of "The Felt Show" was just Santos fisting a doll all by his lonesome in front of a room full of skeptical drunks, but has now swelled to a multi-act, multimedia affair with anywhere from 20 to 30 cast and crew members. Santos, Rumback, and puppeteer Grace Waltz were kind enough to sit down with lawrence.com and yank our strings about the upcoming show-which they consider to be their official debut following the initial "trial and error" performances.

lawrence.com: How would you describe "The Felt Show"? "H.R. Puffenstuff" meets "Wondershowzen"?

Paul Santos: I think we make a little more sense than "Wondershowzen." I consider us a grown-up puppet show.

Ben Rumback: On my resume it says "Avant-garde Theatre Installation."

Grace Waltz: I tell everyone it's an "adult puppet show":

Santos: It sounds kind of pornographic, though, when you say "adult":

Rumback: That's something I've always refused to do.

Santos: He won't make the puppet if it has genitals.

Why puppets? Are you determined to haunt the nightmares of children?

Santos: I was commissioned by the KU Film Department to make some short films:and I went to Ben with a lion puppet idea that I had:

Rumback: Yeah, he asked me because I was in art school at KU at the time: "Do you know anyone who makes puppets?" And I was like, under my breath, "Uhhh-I make puppets:don't tell anyone!" I made them in middle school. I got really into "The Muppet Show":and "Sesame Street" was a big thing my whole life. I was like, "How the hell do they make those things?" So one time I just tried it: 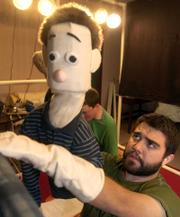 Talk about the physical discipline required to perform in a puppet show.

Rumback: You have to have Shaolin monk training. The lowest level, but you still have to be able to chew glass before you audition and show your stuff.

Santos: We really had a hard time recruiting people at the beginning phase:

Waltz: Well, we've all kind of made a pact to keep our arms raised for at least 10 minutes a day over our heads so we can build up our endurance. Five minutes holding up a puppet definitely starts to hurt your arm. You don't realize:

Rumback: You're maneuvering your hand to synch up with your mouth:all your focus is on your arm and the weight of the puppet. The older ones are very heavy because they're made of cardboard, but we recently switched over to foam rubber and it's a lot lighter. I used to make a lot of cardboard because that's how I guessed they were made. I was wrong-way off.

What's it like to perform puppet shows almost exclusively in bars? Is it hard to get the smell of vomit, beer, and smoke out of felt? 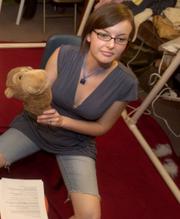 On that Freudian note, why does an audience relate to what is essentially a piece of fabric with someone's hand up its ass? Does that barrier between audience and performer make it easier to connect?

Rumback: I think it makes it easier on both sides. I think people are a lot less prejudiced to what a puppet has to say, and I think-as a performer-I have stage fright when I'm in plays and stuff, but when I'm behind a curtain, I'm like, "Screw it, man."

Santos: Although I've had people that are somewhat scared of a human-looking puppet:

"Pupaphobia." It's a clinical diagnosis based on what Freud called the "uncanny," when an inanimate object looks too much like you and reminds you of your own mortality.

Rumback: And that's the theme of our show!

What are some of the skits we can expect at the next show and how many fart jokes will there be?

Rumback: We tried to avoid them because you expect them from things like "Crank Yankers" and that really low brow humor, so we tried to make it more like stupid shit happening in an intellectual setting. There's a game show, there's Edgar Allen Poe, there's a "Welcome to Hell" sketch.

Santos: We have a news station where everything goes wrong:one anchor is drunk and on Vicodin.

Waltz: My favorite one is a new one called "Goldie Bucks and the Three Rednecks":rednecks come home and find that their Hot Pockets have been tampered with.

Why should people go see "The Felt Show"?

Waltz: What's better than puppets and alcohol put together?

This Is Paul from the show the doors open at 9. We are bringing in chairs so we can situate people so that everyone can see.

Paul and Ben are extremely talented, and hilarious! I can't wait!