By By Matt Armstrong

In the few weeks that I've had my Wii, I've made it a mission in life to infect every person that crosses the threshold of my home with the game play of the system. You let them play for a few minutes, play until they "get it," then let the hunger set in. Give it a few days, and soon enough, they will be there, pawing at your windows like an extra from a Romero movie (and usually with a friend or girlfriend standing a few feet behind), begging for a few more minutes with the precious.

Such was the case when "Wii Play" arrived. Seeing as how "Wii Play" is a collection of mini games, as opposed to one solid, reviewable system, I will offer the reader nine, count them, nine mini reviews.

Remember "Duck Hunt?" This is it, complete with those pixelated, brown and black ducks flying by the gentle player's cross-hairs, taunting you with their.... their.... flappyness. Nintendo and other reviewers have stated that this is indeed "Duck Hunt," as it would appear on the virtual console, but my love, do not be fooled. It is simply a balloon and can and skeet shooting game, with those ducks flying by every once in a while, again taunting you with their bonuses and nostalgia. There is no giggling dog, and it is exceptionally easy. The gold medal level was achieved on the first try.

A game in which you try to locate two look-a-like Mii's, or the odd Mii out, or which Mii runs the fastest. In other terms, a complete waste of time.

As opposed to "Wii Tennis," you control your arm's movement instead of the swing of the paddle. This is infuriating. It makes a half-ass attempt to be a "cuter" version of Tennis, but replaces any nuance with first-person-shooter-quality twitch gaming.

F*ck this game. Unfun on every level. In multiplayer, it is a game of screwing people over; in single player, it is a practice run at going to the Catholic hell. You push two buttons to select a pose, and then twist the remote to match a frame of your Mii that's displayed in a bubble. Doesn't make sense? Good! Stay away.

Air hockey, but with neon-looking bars instead of dirty bowling alley paddles. One of the only truly fun games in the collection. 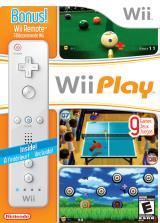 Too accurate, too easy. As fun as playing pool by yourself. Wait. Picture it... yep. It's that fun. Which means not very. Gold medal on the first try.

A small pond full of 2-D fishes that are worth different point values. You hold your hand out over the ground, feeling for the invisible fish in the room. Totally awesome, and I have no idea why. Did I mention I hit my head on the ice a couple of weeks ago, and haven't really been the same since? It did help me quit smoking, though.

Hold the remote sideways to steer your "steer." Get it? It is awesome, except that there's only one track, and the trick to winning is obvious. Gold medal in three attempts.

Anyone who played the Atari's "Combat" knows what I'm talking about-exceedingly simple, but also very fun. You move your tank with the nunchuck, and use the Wiimote to aim the tank's shots. It's the only truly fun game in the collection. When playing alone, this was the only game I played over and over again.

But, all of this is beside the point. The game comes with a Wiimote. Around the world, gamers, mothers, buddies, girlfriends, and boyfriends have been scouring the stores trying to find the damnedable controllers. The remote is $39.99 and from Nintendo. The Wii Play game is $49.99. It wouldn't matter if the game was "Nazi War Camp Commandant," as long as it has that remote in the box, it's going to sell out.

I already had 4 controllers, so I picked this up, sold the controller to a desperate person on Craigslist for $50 and broke even. I've actually found that this is a good warm-up title to teach new users how to use the wiimote (and how to grip it firmly as to not destroy my TV). I was able to get a neighbor through most of the quick games in less than 15 minutes, and then it was on to Wii Sports and Warioware. It's worth the extra $10 for that.