Power Stone must be the hot game to rip off in children's gaming right now. Two days ago I reviewed the PSP version of Xiaolin Showdown, which borrows heavily from the aforementioned Sega classic. Now there's the fighting game adaptation of the Cartoon Network hit The Grim Adventures of Billy & Mandy, and once again, it steals amply from said Dreamcast brawler. Despite its lack of originality, the game does provide some simple, mindless fun for a while, but its general lack of depth keeps it from staying fun for long.

The game plays extremely similarly to Power Stone. Players select their combatant from an assortment of 15 characters from the cartoon, and brawl in an interactive arena against up to three other fighters. Each character's move set is fairly limited, with a weak attack, strong attack, and special "mojo" ability. The mojo abilities are performed after collecting enough mojo orbs in a level, and are activated by a quick lift of the Wii nunchuck.

Thankfully, combat is made slightly more interesting by the inclusion of weapons, most of which are actually fairly unique in their design. There are standards like spiked clubs and swords, but several are more interesting. There's a gun that transforms opponents into chickens by firing eggs at them. Another is a mind control gun that allows you to take over the actions of your opponents. All in all, the weapon designs are interesting enough to help make up for the combat's lack of depth. 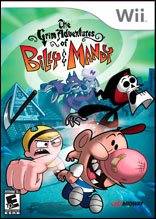 Another nice aspect of the game is its level design. The arenas are all very colorful, and highly interactive. Traps are everywhere, and many can be activated by the flip of a switch. There are also useable turrets in many levels that can be used to fire at opponents. Every once in a while, the arena itself will radically change mid-fight. You will be in the middle of battling your opponents when a giant three-headed dog will come bursting in from the background and attack anyone that gets too close.

Unfortunately, the fun parts of the game become repetitive all too soon. Even the interesting weapon selection and level design can't make up for the fact that the gameplay is incredibly shallow. Most players will tire of it within a few hours, which is already more than enough time to blast through the story mode and the game's 54 individual missions. Multiplayer does a little to help extend the game's longevity, with a wide variety of modes that are playable with up to four people. Battling a couple of your friends can be pretty fun, but once again the simple gameplay will probably bore everyone pretty quickly.

The Wii version of the game introduces a small assortment of motion-sensitive controls into the mix, but for the most part they feel tacked on. Players have to shake their remote side-to-side to perform a strong attack, and swinging the nunchuck upwards performs a mojo special attack when the meter is charged. Both feel like they could have been just as easily performed with the touch of a button. The one interesting use of the Wii remote comes during knockouts, when players have to point at a series of icons in the correct order to finish off an opponent.

In terms of presentation, the game does a great job of capturing the look and humor of the television show. The cell-shaded characters and arenas are pretty basic, but definitely maintain the feel of the cartoon. Things also sound great, with a suitable soundtrack, and humorous voice acting that really captures the show's comedic nature. Oh, and Weird Al is the announcer. Enough said.

In the end, Grim Adventures is a fun brawler that's just too simple for its own good. Most players can appreciate it for its comedic presentation and interesting weapons and levels, but there's just not enough depth in the gameplay itself to warrant much replay.