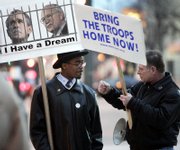 President Bush, in a televised address to the nation last week, announced that he was planning to send 21,500 additional troops to Iraq. Bush also hinted at widening the conflict, threatening that the U.S. "will interrupt the flow of support from Iran and Syria. We will seek out and destroy the networks providing advanced weaponry and training to our enemies in Iraq." The plan immediately drew fire from Congress, with many from the President's own party expressing skepticism. "I do not believe that sending more troops to Iraq is the answer," said Sam Brownback, Republican Senator from Kansas. Despite increasing public opposition to an escalation and a threat from congressional Democrats to block funding for additional forces, the White House remained defiant. "I fully understand they could try to stop me from doing it. But I've made my decision. And we're going forward," Bush said on "60 Minutes." *:The president then authorized tactical air-strikes against Congress, whom he described as "pissing me off." In another startling display of the unitary executive theory, Bush will soon announce plans to nuke Mexico for, as he puts it, "shits and giggles."

THAT'S ALL WELL AND GOOD, BUT THE HMO EXECUTIVE JET ISN'T GOING TO PAY FOR ITSELF:

Governor Kathleen Sebelius set the goal of providing health care for every Kansan in her State of the State address last week. Approximately 300,000 Kansans have no health insurance, and studies show health costs increasing five times faster than wages in the past six years. The Republican-controlled state congress expressed doubts, with House Speaker Melvin Neufeld saying, "That may be irrational. I don't think that is anything that Kansas wants." *:An impoverished, cancer-stricken woman agreed with Neufeld. "Unless they're trying to restrict my reproductive rights, I don't need big government making medical decisions for me," said the Kansas resident between fits of uncontrollable coughing, adding "Oh, God-is that blood?"

The body of legendary soul singer James Brown has yet to be buried, almost three weeks after his death, while his family and attorneys argue over his estate and final resting place. According to an employee of the funeral home in charge of his embalmment, his remains have been kept at his South Carolina house in a temperature-controlled environment. The 73-year-old "Godfather of Soul" died of congestive heart failure in an Atlanta hospital on Christmas Day. *:When reached for comment, Saddam Hussein's corpse responded "And I thought my death was undignified." 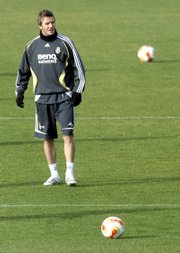 THEY CALL IT "FOOTBALL," WE CALL IT "COMA INDUCING"

English soccer star David Beckham will be coming to America after signing a five-year, $250 million contract with Major League Soccer team the Los Angeles Galaxy. Beckham will first finish this season with Real Madrid, although the Spanish team says it has benched him for the rest of the season. Beckham and his wife Victoria (formerly Posh Spice) are currently shopping for a house in Beverly Hills. "I look forward to the new challenge of growing the world's most popular game in a country that is as passionate about its sports as my own," Beckham said in a statement.*:In other surprising news, America apparently has a professional soccer league.

LOOK FOR THE KIOSK AT BED, BATH &, BEYOND

A majority of Lawrence City Commissioners last week said they would support a program to create a domestic partnership registry that would provide legal recognition for gay couples who are barred by state law from marrying. The Commission stopped short of formally approving the measure, instead waiting for legal analysis from Attorney General Paul Morrison's office. While the registry wouldn't grant the same rights as marriage for gay couples, it would help those involved in a domestic partnership provide documentation for employers who offer benefits to partners of employees.*:Observers speculated the lack of opposition at the public hearings was because "Legally Non-Binding Domestic Partnership Registration Is Between a Man and Woman" is really hard to fit on a picket sign. 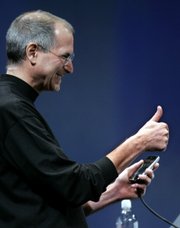 Apple stock soared and tech writers swooned after Apple CEO Steve Jobs unveiled the much heralded iPhone last week. The new gadget from the makers of the iPod will combine cellular phone, MP3, and online functionality in a sleek, touch-sensitive package. Although the iPhone won't be available for purchase until June, demand and hype are already so strong that stock for competing phone manufacturers such as Nokia and Motorolla dropped in anticipation of the release. Cingular will provide exclusive service for the iPhone, which will cost $499 to $599 with a two-year contract. *:The $499 model will have 4 gigabytes of memory, and the $599 model will give you a rim job.