Call them purists, retro-rockers, or deconstructionists and the three members of Log Lady nod in agreement. Call them cock-rockers and they smile.

Log Lady's Myspace page warns citizens to hide their dope and lock up their daughters. Their live shows have an immediately polarizing effect on the audience-hipsters at the bar dismiss them as derivative, whereas rock and roll fans twist and shout on the dance floor.

In a moonlit clearing across the river, Street Level meets up with bassist Adrian Rees, drummer Justin Hodson, and guitarist Jack Pierrelee to discuss the advantages of the three-piece band, a plethora of rock stars, and the imperative of keeping an eye out for beavers.

What are the advantages of the three-man band?

Pierrelee: You get a little more freedom with your individual part.

Hodson: It's easier to communicate. You don't have to worry so much about sticking to a specific thing in order to cooperate with a group.

Rees: It's freer for each individual. A two-man band gets even more freedom, because there's more space to fill. You have an easier time gluing it together when there are just three people.

In your live performances, your music seems to immediately polarize the audience. The older people are usually completely with it, and the younger people aren't getting it. And you're conscious of that. Are you making a statement?

And I quote: "We want to be the reset button for the Lawrence music scene."

Hodson: I think there's stuff that people just don't listen to that they should hear-because it's good. Younger people aren't listening to the older stuff, like Cream. It's healthy for them to listen to that music, because it's why the stuff they do listen to sounds like it does. We enjoy it; that's why we play it.

Are young musicians today tending more toward being rock stars or being musicians?

Rees: Now there are all kinds of people walking around looking like rock stars that don't even play music. Everybody wants to be a rock star. :What it came from was playing [rock] music and being rebellious, trying to break some norms. But now it's become just another norm.

What do you think of the Lawrence scene?

Pierrelee: It's a good scene; we've got some great bands. But sometimes we just want to go to a bar and see a hard-rockin' band with some guys that can play their instruments. We weren't seeing a lot of those and that's what got me and Adrian talking. Doing something that was in your face, a little different but still musically grounded.

Several times I've heard you referred to as cock-rockers.

Pierrelee: (laughter) That's good. We like that. We want to have the music be real ballsy. How blatantly over-macho can we get?

You're playing more gigs around town, you built a studio:

Rees: We built a studio to record our own stuff. We're writing a lot of new music-there's going to be a lot of stuff to record in the near future. Probably in the next year, an album.

Shop it or self-release?

Rees: Not quite sure. I do like the do-it-yourself thing. We really want to do some touring. Build up a regional fan base. 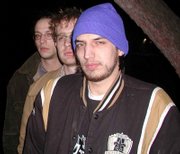 Are you looking to make a career of Log Lady?

Pierelee: Be nice to. We'll work as hard as we can right now.

Rees: The reality is, it's not that glamorous. It's a workingman's job. You've got to love playing music. That's really what we're about: we're a musician's band.

Pierrelee: We do a Cream song. A couple of Zappas. An Otis Redding.

Rees: We play more originals than covers. We're not above playing covers-covers are great. But what we try to do with covers is pick a kick-ass song-that kind of song that's so good it needs to be heard some more.

But there is a modern sound to Log Lady. What are some of your influences?

Rees: We grew up in the modern times, so we love everything.

Rees: What we've tried to go for is kind of this older, retro thing. But growing up the way we did and listening to what we have, there's definitely a modern feel.

Are you all Midwesterners?

Rees: Me and Justin are both from Kansas.

You've known each other since kindergarten in Lecompton. How was it growing up in Lecompton?

Rees: It's a peaceful place, despite its bloody past. It's a quaint little town now.

Hey! Its Brother Hodson! Love it.