Based on a comic book, The Darkness puts you in the shoes of Jackie Estacado, a long-haired mafia goon that's celebrating his 21st birthday. After receiving a violent birthday surprise from his uncle Paulie, you embark on one of the most atmospheric, beautifully presented action titles of the last few years.

The Darkness has much in common with Starbreeze Studio's previous title, the excellent Chronicles of Riddick. You'll share dialogue with many NPC's, stalk in the shadows as you prepare for your kill, and take out enemies in very brutal fashion. The graphical style is similar as well, but the presentation is even better than that in Riddick.

Rather than being confined in a maximum security prison, Starbreeze takes this one to the streets of New York. About 4/5ths of the game takes place here, with the remaining fifth taking place in a WWII-esque hellscape. Jackie has inherited a terrible curse of sorts he's controlled by a malevolent force called "the Darkness." Part of the curse involves a voice in Jackie's head, but another part is very tangible. When in darkness, he can sprout two giant black snake-like heads and tentacles out of his back. He has a certain amount of control over them, and your abilities will grow as you devour the hearts of enemies. 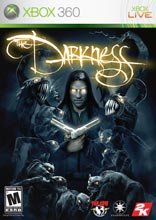 Defeating enemies with your Darkness abilities is far more satisfying than the traditional FPS guns (although these are available as well). You can eat enemies and scout areas with a detachable tentacle, impale enemies, shoot special "darkness guns", and even create black holes. Granted, you have to be in the darkness to charge these abilities, so you'll need to get used to taking out light sources whenever you expect a firefight. There isn't a visible "darkness meter" that shows you how much power you have left. In fact, there is usually nothing visible on the HUD (further adding to the cinematic feel of the title). As you play, you'll get a good feel of how much darkness power you have at your disposal. If you're running low, it's best to duck into the shadows to allow the snakeheads to gain more power. It's a nice twist that adds a bit to the standard FPS formula.

Gunplay is far more generic, and it's actually pretty difficult to get a good bead on enemies. The default controls are far too sluggish, so it's a good idea to tweak them to your liking when you first start the game. My favorite aspect of the gunplay is the execution moves, which allow you to dispatch foes in exceedingly brutal ways if you're close enough to them.

Jackie can also summon "Darklings" from specific portals that are only visible when The Darkness is active. There are four different types Berserkers, Gunners, Kamikazes, and Lightkillers. Each of them is appropriate for various situations, and they'll help both with defeating enemies and progressing along certain pathways.

The Darkness does just about everything right in terms of single-player, but it's the opposite situation with the online multiplayer. It's a mess in terms of level design, online performance, and overall generic-ness. The only unique aspect is the ability to shapeshift from a Darkling to a human, but you won't use this often thanks to the weak attributes of the former. The intriguing aspects of the single-player campaign are entirely absent from multiplayer, and the extreme lag makes it almost unplayable.

The Darkness is visually impressive, but there are occasional missteps. Some textures are a bit flat, and there's a decent amount of glitches on faces (especially around the outlines of hats and other clothing). Despite this, every single NPC in the game looks entirely different than the last, which is a nice change of pace from most game's cookie-cutter approach. One thing that did consistently annoy me occurred when I was devouring hearts in the middle of a firefight. I'd be trying to aim at an enemy, but the two snakeheads would be tearing up the heart right in the middle of my screen, completely ruining my chances of getting a good shot on my foe.

The true star of The Darkness is the overall presentation. It's wonderfully voice-acted (especially Faith No More lead singer Mike Patton providing the voice of the Darkness), and it's hard to find games with a more cinematic feel than this. There are countless moments where you really feel like you're in a movie, and this does wonders in terms of making the game more immersive. It reminds me of Prey in many ways. The gameplay is competent yet unremarkable, but the presentation makes the experience a highly entertaining one.