Good: Exploring the academy, amount of things to do

Bad: Doesn't explain the story well to those unfamiliar with it, the magic duels, moving items with the Levitate spell

At no point in my life have I read a word of a Harry Potter book or seen a minute of the films, so I was clearly confused when Order of the Phoenix started up. I didn't know why a face made out of fire was talking to me, I didn't know who Voldemort was, and I have no idea who these two kids were that follow me everywhere. At no point in the "narrative" (if you can call it that) does it do a good job of clearing this up for those unfamiliar with Potter, but there are a few decent gameplay aspects.

About 90-95% of the game takes place in the academy, with a couple brief excursions later on. It's essentially a less-polished version of Bully, replacing swirlies with magic spells. You'll learn a few of these spells early on, and they're tremendously important when exploring the academy. Unfortunately, the camera control and odd input method for the spells makes this a chore more often than not. On the 360 and PS2, you control them with the right analog stick, making quick double-taps and rotations to initiate them. It's a bit more fun and intuitive on the Wii, using the remote to make the necessary gestures. Unfortunately, the levitate spell is very difficult to perform correctly, as it forces you to hold the controller up and move them in accordance with the item. Thankfully, it's the only unresponsive spell.

These spells will set fires, push and pull items, levitate objects, and other effects. Order of the Phoenix is definitely not an action game:there's far more exploration and fetch-questing than dueling with magic. Your spells become more powerful as you earn "discovery points", which are obtained by lighting torches, fixing vases, uncovering hidden plaques and statues, and even disturbing birds. It's in these moments that the game can be genuinely entertaining. The fetch quests get old quick, but it's always fun to explore the massive academy earning points. 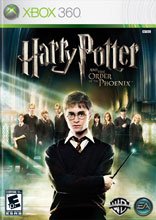 On top of the exploration and story segments, there is a good variety of minigames to be found. You can play a variation of jacks, Memory, and even full games of chess (although the A.I. is a little weak, considering the 4-move "blitzkrieg" move worked during most of my matches).

Order of the Phoenix isn't exactly the most visually appealing title out there. The facial models are pretty accurate, but basic textures and animations are awkward. There are also many times the camera will oddly cut to poor angles, causing you to stare at someone's feet when you're trying to talk to them. The voice acting is well-done, but there isn't anything to write home about on the musical end of things.

If you play this game and focus on the exploration aspect, you'll probably have a decent time with it. If you play it looking for a solid main quest, you'll end up a bit disappointed. Regardless, it's probably worth a rental at least for fans of the series.