Bad: Not much to do, multiplayer is lacking

Why: Is my controller yelling at me?

The Brain games on the DS became a bit of a phenomenon in the last couple of years, reaching mainstream gamers in a way no other game on the system had. Everyone from 4th graders to adults loved it, and it sold by the truckload for Nintendo. Big Brain Academy: Wii Degree marks the series' first foray onto the TV screen, and it's a bit lacking.

Of the two Brain games that came to the States (Brain Age and Big Brain Academy), I greatly preferred Brain Age. It was a bit less silly, and seemed to have more actual "science" involved. Then again, that might be thanks to the big talking head that kept telling me it was a neuroscientist. Big Brain Academy was brighter, goofier, and a little less clinical than its predecessor. While it was fun in its own right, it didn't quite stack up to the original. 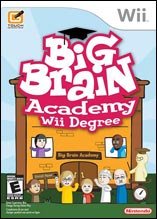 Wii Degree most definitely resembles the second DS Brain game, unfortunately. It's not as reliant on the "daily play" aspect of the original title, and features the same art style as BBA. The single-player test is split into five categories: Analyze, Compute, Identify, Memorize, and Visualize. Each of these categories tests you with three brief games. They're pretty varied, and you'll be memorizing kid's faces, counting the number of colored balls that go into a basket, and popping numbered balloons from lowest to highest. Your controller acts as your "remote coach", yelling various sound bites to you. There's a bare-bones multiplayer mode, and the majority of them feature the Warioware-esque "pass the controller around" method.

Unfortunately, there's just not enough content to warrant the $50 price tag. While the included minigames are pretty fun, they get old after a few playthroughs. Wii Degree doesn't track your progress nearly as well as Brain Age, so it doesn't offer much incentive to keep coming back.