Good: Destructible environments, a couple of the Decepticon vehicles

Remember that War of the Monsters game? Yeah, it was pretty fun, but wouldn't it be better if you slapped on a movie license and sapped it of any fun or originality? Well, that's pretty much what you'll get if you decide to play Transformers.

I didn't grow up watching Transformers (in fact, I had no idea who Optimus Prime was before I saw the new film), so maybe I'm missing an important bit of nostalgia. Fond memories aren't going to remedy bland gameplay, however. You can choose to play as the Autobots or the Decepticons, with the latter missions proving superior to the former. 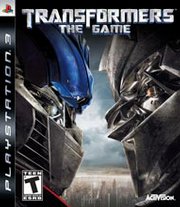 All of the mission objectives are as vanilla as they could possibly be. Beat these bad robots to the used car shop. Destroy "x" amount of "y" item. Destroy this enemy. There isn't a moment of inspired development to be found in Transformers. Many of the missions will end in failure simply because of unreasonable criteria. Annoyingly, you have to take the time to reload cinemas (oftentimes several) every time you restart the mission.

Perhaps the main offender in terms of gameplay is the action itself. Your bots are equipped with primary and secondary weapons, but you won't be using them very often. A large amount of the enemies are shielded or otherwise immune to your guns, so you'll have to get used to mindlessly mashing the "melee" button to take them out. It gets old by the time you've finished your first mission, and it doesn't get any better later on.

It was a blast to destroy everything in sight in War of the Monsters. Transformers also has a large amount of destructible buildings and vehicles, but the physics engine is ridiculous. Entire buildings will collapse if you simply brush against them. Cars go flying through the air if you get into a fender bender.

I didn't think the movie was anything special, but I may be in the minority regarding that opinion. For those that enjoyed it, the game fills in some small bits of information. You'll find out how Bumblebee realized Sam would be at the used car lot:if you're the sort that cares about that sort of thing.

While the actual bots and the transforming animations look pretty sharp, the environment you're destroying is as bland as the combat. The musical score is passable, but the voice acting is sub-par at best.

A game based on Transformers could have been a lot of fun. If it featured a deeper combat engine and some inspired mission objectives, this game could have been a great War of the Monsters-esque title for those times you just want to destroy everything in sight. Unfortunately, you'd probably have a better time playing with the Transformers Happy Meal toys you got when you were a kid.