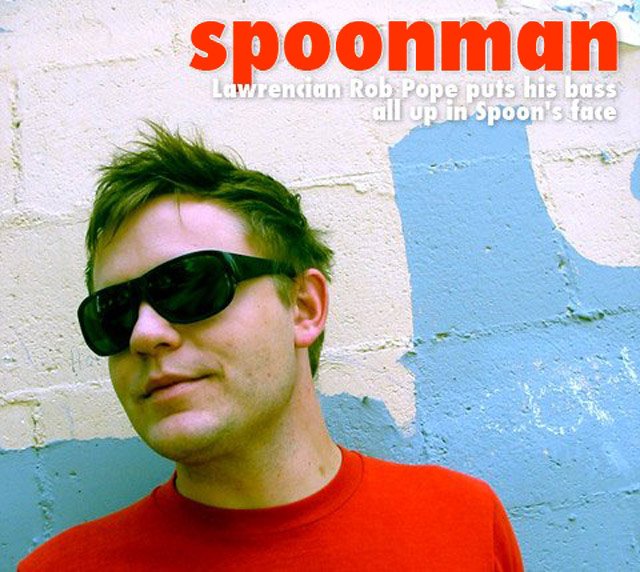 Rob Pope has fashioned a career of playing the bejeezus out of the bass, and the former Get Up Kid and current White Whale anchorman snared his biggest gig to date when indie-rock hitsters Spoon invited him into the fold for their new record "Ga Ga Ga Ga Ga." The Lawrence homey joined the band for marathon rehearsals in Austin and ensuing recording sessions at drummer Jim Eno's widely regarded home-studio and will tour with them this fall. Pope visited our podcast studios with a copy of the new CD in hand to discuss the making of the record and everything Spoon.

Rob Pope has fashioned a career of playing the bejeezus out of the bass, and the former Get Up Kid and current White Whale anchorman snared his biggest gig to date when indie-rock hitsters Spoon invited him into the fold for their new record "Ga Ga Ga Ga Ga." The ...

lawrence.com: When did you join the band?

I've been playing with them just under a year. Jim (Eno) and Eric (Harvey) live in Austin and Britt (Daniel) is currently living Portland. It makes band practice really difficult.

Do you just teleconference?

Yeah. We get on a conference call and discuss who's gonna play what.

Actually it makes band practice become these marathon three-day things in Texas where we practice for like 10 hours straight. Which is kind of exhausting but good.

Why did you decide to join Spoon and how did this all happen?

I didn't really know those guys beforehand but a friend of mine was working with their management and called me out of the blue one day and was like, "Hey, Spoon needs a bass player. Is it cool if I throw your name in the hat?" I said sure : I didn't really think about it, and then last South By Southwest I met up with Britt and had breakfast and talked about it. Last year they flew in (to Lawrence) for Day on the Hill and we ended up rehearsing in my basement before they played that show. It went really well and that's how it happened.

How much of a fan were you?

I was a pretty big fan. I really loved "Girls Can Tell" and "Kill the Moonlight" but I hadn't really heard "Gimme Fiction" a lot : but then I got really into that record and even their older stuff. "Series of Sneaks" is great.

(Listening to "The Ghost of You Lingers") So already this sounds like an entirely different Spoon record.

Yeah, that's like a Brian Eno track, huh? It's kind of all over the place, which is good.

What were your first impressions when you heard the skeletal versions of these songs, and how did that translate to what actually ended up on the record?

Britt's always been really good about having a grand concept for his records. I think he did a good job putting this one together in an interesting fashion and not just making the same Spoon record over and over : The way that they record is really interesting. They're still recording to tape and we spent a lot of time trying to get really unique sounds so it doesn't sound like old Spoon songs.

Did you play on each track on this record?

Not every single track. A lot of the stuff they had worked up beforehand, and there's two songs on the record that don't even have bass. But I ended up playing on just over half the record.

How does it feel to join a band 12 years into its career?

It's pretty interesting. It's like meeting brand new people. Even now it still kind of feels like I'm settling into it. But at the same time I think those guys respect me as a musician. I think this is the first time in awhile where someone besides Britt played bass, so that was pretty flattering : I've always loved the bass lines on previous Spoon records, so he knows what he's talking about.