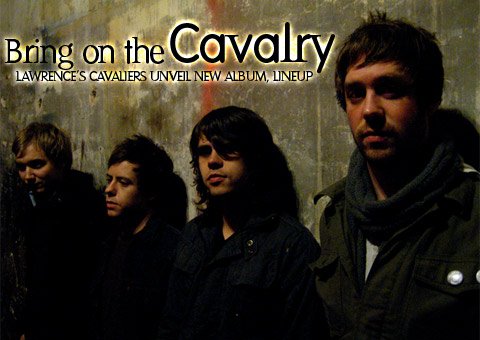 Sometimes the best things are worth waiting for. Lawrence's Cavaliers have certainly delivered on that premise with a full-bodied debut record dubbed "Except for the Birds." Led by former Getaway Driver frontman Stephen Wolfe, the band has developed from a solo project into a fire-breathing local music gryphon featuring drummer Ryan Pope (formerly of The Get Up Kids), bassist Nate Harold (formerly of Kelpie), guitarist Ricky Salthouse (The Only Children) and keyboardist Ehren Starks (The Roseline). "Birds" presents 10 tuneful pop songs with folk overtones showcasing rich arrangements and sharp production via Black Lodge Studios and producer Nick Day. Old high-school chums Wolfe and Harold dropped by with an advance copy of the record to discuss its actualization and the bright future of the Lawrence Cavaliers (Lebron who?).

Bring on the Calvary

Sometimes the best things are worth waiting for. Lawrence's Cavaliers have certainly delivered on that premise with a full-bodied debut record dubbed "Except for the Birds." Led by former Getaway Driver frontman Stephen Wolfe, the band has developed from a solo project into a fire-breathing local music gryphon featuring drummer ...

lawrence.com: So the record was done at Black Lodge?

Wolfe: That's right, 100 percent of it-except for the birds. That's where the name comes from. There are some birds on one of the tracks, and that's the only thing that wasn't recorded at Black Lodge : I recorded them with my minidisc player outside of my house one morning.

Wolfe: It's actually the oldest song on the album. That's one of the things about this album-it's a span of about five years. A band that Nate and I used to be in (Getaway Driver) tried to do an incarnation of it : It's probably the fourth version of the song that we've done.

Harold: It's pretty obvious we're professing our love for ELO with the arrangement.

So the story of Cavaliers probably began around the time that Getaway Driver disbanded?

Wolfe: Yeah, the songs come from around that era. I actually took almost an entire year off not playing any music before I was urged by Nathan to start doing stuff again. I just kind of lost it for a little while where I was like, 'Whatever, I'm just not going to do it.' It was a weird little period for me because for such a long time I played the guitar six hours a day. Then all of a sudden it was sitting there in the corner of the room and I didn't want anything to do with it : I think getting a 40-hour-a-week job had something to do with it.

So Nate-what did you tell your buddy Stephen?

Harold: I'd always been a big fan of Stephen's songs and he had this batch that I was liking. I'm not going to take any more credit than I'm due, but I just tried to kick him in the pants. I did some arrangements on GarageBand of some of his songs. We started really liking that collaborative process, and here we are.

Did it feel like you were making a big investment both financially and time-wise in this record?

Except for the Birds

Wolfe: It's kind of all over the place, and I think that's the price I'm going to pay for having it span such a long period of time. When I first started doing solo shows to get the ball rolling on the whole process, I got the alt-country tag a lot. When it's just you and an acoustic guitar, a lot of songs end up coming out that way. And there are a few : the song that caps the whole record off is probably the most alt-country of them all.

Harold: Yeah, I think it's the only alt-country song.

Wolfe: It's called "The Last Song"-sort of a play on "The Last Waltz" (by The Band).

Harold: Oh, I never got that until now.

Were you listening to that a lot? Are you a fan of The Band?

Wolfe: Absolutely. They're probably my favorites aside from The Beatles and The Zombies.

Harold: Stephen and I had a weekly screening of "The Last Waltz."

Is that your favorite Band record?

Wolfe: Uh, no. It's so hard to pick. It's either "Music from Big Pink" or the self-titled one. It always goes back and forth with those guys-they had so much good stuff. I haven't heard the record from 1996, but I'm a little afraid to based on the cover photo :

I think you meant "Bring on the Cavalry," not what you have written. A cavalry is military unit that fights while mounted, traditionally on horseback (like the cavaliers of the English Civil War.) Calvary is another name for Golgotha, where Jesus Christ was crucified.