Hell, Man, I'm Not Gonna Shoot 'Em Way Out There!

A piece by Jon Blumb

By By Jon Blumb / special to lawrence.com

The photos herein represent only a portion of Jon Blumb's "Portfolio of William S. Burroughs. The full collection and other photos can be viewed at jonblumb.com. For information on purchasing these and other prints, you can contact Jon Blumb at jblumb@kc.rr.com.

The first time I set up a shooting range for William Burroughs, I went out to the farm early and set up targets on a board, an improvised table, and lawn chairs. When I brought William to the spot later that afternoon, he sized up the distance, commenting, "Hell, Man, I'm not gonna shoot 'em way out there! Move 'em up closer-most gunfights are just across a room!"

William was not a person to flinch at magnum recoil. On the contrary. He tried my favorite Colt .22 revolver just once, firing the full load of six shots, and handed it back to me unceremoniously, with a "Yeah, that's nice." He was being polite rather than telling me that small calibers didn't have enough punch to turn him on.

He enjoyed shooting a full array of firearms from .38, .357 Magnum, 9mm, .44 Special, .44 Magnum, .45 ACP, .45 long Colt, and .454 Casull. The more energy expended and recoil produced, the better! William liked to see and feel the results of his endeavors, from being physically pushed back by a firearm to examining the targets and touching the holes with his fingers, as if he had an intuitive system of scoring targets in which he merely had to touch the holes while his mind tallied up the scores. 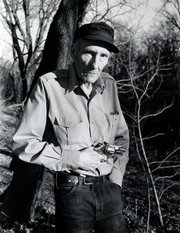 If a few spare moments presented themselves, he would often occupy himself by practicing knife throwing at a nearby target board or shed door.

That magnum theme came to be familiar in my dealings with William Burroughs. While the range might have been close, the content was large-bore. His gusto extended into his writing and art, as well. William always enjoyed art and photography, and had been active in both. When called upon to photograph new art works, I was amazed at the volume of paintings he would make in a week. They were not simply a pastime, but a serious obsession.

William was revered as a sage, which sometimes seemed to be a distinction he did not welcome. Young visitors would often try to ask him questions they meant to be taken as intellectual or insightful. Usually he did not identify with those attempts, and he'd dismiss them without hesitation. 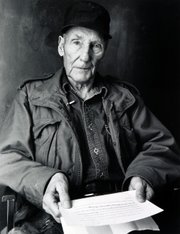 Recording session for a music video, 1992.

I met William while photographing his art. Having specialized in photography of fine art for years, it was a different scene to observe as William exhibited, published, and sold a large volume of his art. The reviews and attention came from a different audience, not the mainstream art establishment. Writers, editors, and musicians were interested. Collectors were buying William's art. It was entertaining to see artists' and critics' jealous reactions to William's notoriety. Soon I was invited to photograph him at voice and video recording sessions. I knew I was lucky to have access to photograph William without formality, and we enjoyed shooting together.

I took a new air rifle over to visit William, and he was interested until he asked, "Will it shoot through a 2 x 4?" I had to admit that it wouldn't, even though it fired a .20 caliber pellet at 800 feet per second. He walked away, thinking about something else. Minutes later, he had gotten his own pellet pistol out and instead of shooting at 2 x 4s, we amused ourselves by firing at targets on a pellet trap placed across the living room, near the front door. Later, William read favorite passages from the book about gunfights, Triggernometry, by Eugene Cunningham, 1934. 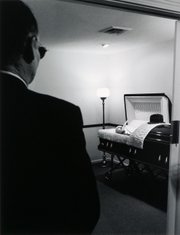 William often enjoyed speaking in the vernacular, skillfully using poor grammar to drive home a point or a mood, just like his tough-guy characters. Being present at recording sessions was an enjoyable benefit of my work. It was a rare chance to hear him use his theatrical voice to interpret the written word.

Luckily there is a legacy of voice recordings that adds another dimension to the memory of William's character, including the Naked Lunch, Spare-Ass Annie and Dead City Radio CDs produced by Hal Wilner, and the CD set by John Giorno.

William lived unpretentiously and had many friends. Lawrence residents were flattered that he had chosen to live among them, and returned the favor by giving him generous amounts of privacy and respect. The week of his death, a few reporters showed up in town trying to dig up stories, but ended up frustrated by the treatment they were given by reticent Lawrence residents.

William and his persona represented a spirit of independent thought, and an open mind-in unconventional ways. His dark sense of humor, parody, irony and satire struck a chord with numerous readers. While he was often cited as a member of the Beat generation, it seems that he really hit his stride with the next generations, who continue to be very receptive to his talents.

Perhaps William lived in a world where criminals and desperados were closer to the norm. What many regarded as a paranoid obsession with weapons may have been a rational reaction to the realization that he lived in a violent world, and a logical conclusion that he would protect himself by whatever means necessary.

At the end of a target shooting session, we were packing up our gear, when William decided to keep his favorite revolver loaded and ready in a belt holster. He said, "I'll keep this one for the ride home. Yeah, if we run into any of those assholes that want to take your money AND your life, I'll just put another hole in those ASS-holes!" As the humor of his statement sank in, he repeated his last line, chuckling to himself. Loaded guns were the norm, unloaded they were useless.

On the other hand, his was a creative spirit who persevered through many problems and adversity. It is our respect for such an individualist that keeps our interest in William alive, and will keep new audiences reading and discussing his work in the future. 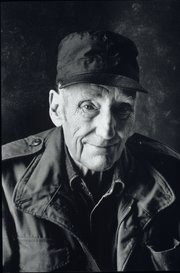 A portrait of the Old Man.

It seemed to many friends that William would live indefinitely, partly because he had outlived many of his contemporaries. When he died in August of 1997, it was a shock to his friends who were used to his energetic personality. It was natural for me to document in photographs his funeral and the final journey to his family's cemetery plot in St. Louis. Many of his friends were in a prolonged state of mourning, and I deliberately did not publish the funeral photos immediately. Now I feel that it is appropriate to show these photographs from the end of William's life.

William's death reminded me of the painful fact that people and opportunities will not be available forever. We must enjoy them now, while the time is ripe and the chance is at hand.

William was a collector of experiences, ideas, books, and weapons. He was an innovator with a creative, visual mind. To him, life was a fascinating journey. William identified with the spirit of the following quotation, attributed to Plutarch in 56 B.C.: