One of William S. Burroughs' chief activities in his Lawrence years was creating art.

From about 1987 to 1995 he spent hours each day filling up stacks of sketchbooks in his bedroom and experimenting with shotgun art outside of town.

After receiving a kick-start in the form of a celebrated opening at Tony Shafrazi Gallery in New York in 1987, his art was in some demand by curators and collectors for the rest of his life.

Art was something Burroughs created in earnest, yet with his lack of formal training and unrefined style the question is inevitable: Did the art simply turn to gold at Burroughs' touch, or does it stand on its own merits?

Spencer Museum of Art Curator Stephen Goddard, during an interview in which he praises Burroughs' art (and generosity in sharing it with the Spencer), slips in: He "wrote beautifully and played well with art."

While his knowledge of literature was famously wide and deep-and his memory for what he'd read encyclopedic-Burroughs showed little serious interest in art for much of his life and so was unaware of much of what preceded him when he began his work.

"He made art in what is called, art-historically, a naÃive way," says James Grauerholz, his longtime friend and assistant. "He made art without that level of training or consciousness about the materials he was using or the predecessors or the themes that he was reacting to."

Grauerholz says Burroughs was more interested in "'action painting'-the idea where the artwork becomes a mark or a record of an action. : Making the art was a big part of the art that ended up existing after he made it." 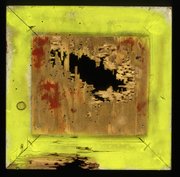 He was struck by the stark contrast between the slapdashery of Burroughs' methods and the veneration they received at the opening of his "Ports of Entry" show at the Los Angeles County Museum of Art in 1996.

"In the courtyard of the museum they had this big extravaganza, and all the glitterati were spread out at tables and Absolut was providing the liquor," he says. "I'll never forget walking down the line looking at the various things that he had done, and I spied this piece of plywood."

It was from the roof of Aldrich's old house.

"It was hard for me not to laugh because here it was sitting on the walls of this august art museum now with William Burroughs' signature and his artwork on it, going for some obscene amount of money."

Paintings by William Burroughs in the back porch of his house on Learnard Ave.

But curators-people who do know a great deal about art history and take their exhibits seriously-continue to be drawn to Burroughs' work, whatever their reasons.

Freelance curator Hendel Teicher is putting together an exhibition, "Cut-outs and Cut-ups: Hans Christian Andersen and William Seward Burroughs," slated to open next spring in Dublin.

While the show wouldn't be possible if it weren't for the fame these two men achieved as writers, that doesn't mean their art isn't worthwhile, she says.

"What I thought fascinating is that these two visionaries had such a deep and long engagement with the visual arts and created fantastic and beautiful artwork," she says, "like using the idea of cut-outs, working with stencils, with shadows, while using brilliant colors and metallics."It's something I personally learned not so long ago, that the extent of the artwork for both writers is quite large. It's not just an illustration of the writing. It's a medium in and of itself."

Before Burroughs began his solo work he was influenced by collaborators. The "automatic method" he employed was especially influenced by Burroughs' friend Brion Gysin, Goddard says. Mix these influences in with his personal twists, like his love of guns, and you might get something interesting.

"Certainly the shotgun series, the idea of moving past traditional drawing materials into something that has an element of violence, is compelling and certainly idiosyncratic," Goddard says.

"He had these stacks, as I recall, of sketchbooks. I was just overwhelmed by the amount of work that he was doing. When I think about teaching at KU for all the years that I have been teaching and how difficult it was to get students to fill out a few pages of a sketchbook-William was filling them out in a matter of weeks.

"I was flipping through them, and I've never been a real big fan of Burroughs' work, but I really enjoyed looking through these drawings and collages, or stencil paintings or whatever you might want to call them. Because when you do 10,000 of them you're bound to come up with some that you like regardless of whatever your aesthetic persuasion might be.

"But every time I'd pull one out and say, 'William, this one's really nice,' he would say, 'Aw, that's shit.' He'd say, 'Look at this one,' and he'd find another one. He'd point it out and invariably I wouldn't like that one. So from an aesthetic standpoint we were completely on a different page."

Back to the central question: Does Burroughs' art draw attention because it has his name on it or because it's good art?

"I think there's a certain amount of truth to the suspicions that people who were interested in William's work were interested in them as souvenirs of him and his reputation of being an icon in literature," Shimomura says. "To do the kinds of paintings that he was doing was an intuitive act. When you act on pure intuition like that good things are bound to happen when you're as prolific as he is, but the body as a whole, I think, reflects that naÃivete.

"But the fact that he was so adept at words carried over to a certain kind of knowledge about the way he put together visual elements. I think it translated to some extent. So he was better than the average person that might attempt the kind of art that he attempted to do for the first time. He came with a lot of information and knowledge that gave him a jump start."

"I did a series of paintings once-portraits. And one of the first ones I did was of him. But to do the portrait I needed photographs. So I called him up and I asked him if he'd be willing to be photographed wearing a kimono, and he agreed to do it. So I went over there and I brought a black kimono with me.

"Then in the course of just talking with him before I took the pictures, I was looking at a couple of the guns that were lying around the house. I asked him what his favorite weapon was and said it was this Derringer that he just got. It was one of those ball-and-powder-loading Derringers. So I looked at it and I was sort of playing with it, and of course made sure that it wasn't loaded. 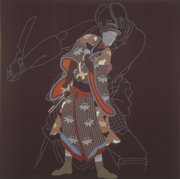 "I asked him if he would point it at me-if he would put the kimono on and point the gun at me. He got a little antsy and he said no, he wouldn't do that, he would never do that. I said, 'This gun is unloaded-I know it's unloaded.' It would take you probably an hour to load the damn thing. I said, 'Just point it right at my face. And I want to take a picture of you.'

"He finally agreed to do it. So I took this picture of him and what was interesting about it was that the gun was a little out of focus because his hands were trembling. I mean, really trembling, and the gun was too. But anyway, I got my photographs and eventually did a painting of him."

Shimomura received a call one day.It was James Grauerholz asking if he was interested in looking at Burroughs' artwork and offering advice. The work was about to be shipped off to Tony Shafrazi Gallery in New York for Burroughs' first solo exhibition.

So he drove over to look at the pieces that were being packed and quickly noticed that the paper on some of the collages was cracking.

"You know, you're gonna have a problem with the prices that you're probably gonna be asking for these," he told Burroughs. "These are not archivally very sound."

He pointed out where pages of National Geographic had become brittle and were flaking off the surfaces-big doors and things-that he'd glued them onto.

"James!" Burroughs said, turning to look for Grauerholz. "James! Did you hear that? We gotta sell these goddamn things before they fall apart!"

Shimomura later brought Burroughs to his studio and showed him how to adhere magazine pages onto canvas or wood using Elmer's Glue and Liquitex. He seemed appreciative. Â»