When he moved here in 1981, Burroughs had been world famous-and infamous-for at least two decades, following the publication and subsequent U.S. ban of his seminal book "Naked Lunch."

From that point on "Burroughs" was an icon. He represented a revolt against that 1950s-style suburban correctness, what Thomas Frank characterized as "You know, that land of sedate music, sexual repression, deference to authority, Red Scares, and smiling white people standing politely in line to go to church."

Much has been written both praising and deriding Burroughs' work and his impact on the cultural landscape; for the most part, that is not our concern here. Rather, all the interviews we did for this issue were concerned with one thing: Burroughs' time in Lawrence.

Lawrence. Kansas. Burroughs was frequently asked-as all Lawrencians inevitably are: Why Kansas? When you could live anywhere-in any of the world's cultural capitals-why Lawrence, Kansas?

His friend Jim McCrary writes, "There were many answers and most often, William, in his manner, would answer: 'New York City was too expensive, too dangerous; it lacked privacy.' Lawrence was quiet:'They leave me alone.' " (from "Embattled Lawrence: Biography of a City") 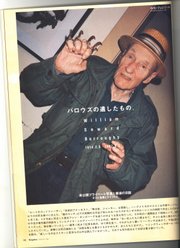 Burroughs in Esquire Magazine Japan shortly after his death in 1997.

When he moved here, he traded in his 3-piece suit and fedora big city style for a blue-jean, seed-hat life. But his life in Lawrence was not one of retirement. He continued to work, writing four major books and producing innumerable artworks that continue to be exhibited in museums around the world. Burroughs' celebrity continued to grow while he was here, too. Pop culture seized up the Old Man's visage and voice-he posed for a Gap ad (see the Deadwood Edition's cover photo) and was part of Nike's early '90s "Just Do It" campaign.

Burroughs lived in Lawrence longer than any other place-16 years. This collection of stories can only scratch the surface of that time. The multimedia adds a bit more-video of Burroughs, photo galleries, slideshows, recordings by Burroughs, mp3s of many Lawrencians remembering their friend, and so on:

But the most comprehensive perspective of Burroughs' time in Lawrence will hopefully come from you, dear reader. We've set up a guest book -we hope you'll take a moment to share how the Old Man's presence here affected you. Thanks in advance-and thanks for reading.

Lawrence did matter to William: William did matter to Lawrence. William's presence here affected the lives of two generations of Lawrence citizens, and a dozen matriculating classes at the University of Kansas. In avant-garde circles across the country and the world, Lawrence was known as "the little town in Kansas where William Burroughs lives."-James Grauerholz

Beautiful job on the Burroughs tribute! Are hard copies available for people who do not live in Lawrence? I can't help but feel the Old Man would have wanted one cut up.