A piece by Mark Luce

My son, Miles, was conceived in William S. Burroughs' bedroom.

Perhaps I should explain.

Burroughs, monstre sacre of American letters, lived the last 16 years of his life in a cozy Sears, Roebuck and Co. bungalow on quiet, tree-lined Learnard Ave.

Two years after he passed, I moved into that house, where I lived until September 2001. Three weeks after we left, we discovered the newest member of our family was nestling in Jen's belly.

Burroughs and I had met in May 1996-my wide-eyed reporter to his reluctant interviewee for the Journal-World's series on the events surrounding his "Ports of Entry" exhibition in Los Angeles.

That day was not particularly pleasant, as I had burned through my enormous list of questions in about 10 minutes. Mr. Burroughs, it seemed, was inscrutable.

But the five days of front-page coverage in the hometown paper must have softened the Old Man a bit, because after "Ports of Entry" came to Lawrence, I found myself in what would later be my living room-an invited guest at the table of William S. Burroughs.

Inexplicably, Burroughs and I became friends, regularly sharing dinner and drinks. Quickly, the earnestly boyish wonderment of tipping vodka and Cokes with the literary outlaw faded and I liked William the way you like your grandpa-only this particular grandpa recited enormous chunks of Byron, held impressive court on Fitzgerald, Hemingway and Conrad, and chafed a bit at being the much-praised international icon credited with bridging the gap between literary modernism and postmodernism.

Unfailingly polite, occasionally mischievous, he was armed with stories and opinions, which he would often lean into with the raspy introduction, "Well, my dear, let me tell you about that..." 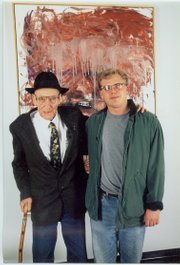 Burroughs with Mark Luce at the "Ports of Entry: William S. Burroughs and the Arts" exhibition at the Spencer Museum of Art in 1996

So, my dear, what was it like to live in Burroughs' house?

There was always a hard and fast rule about giving out the address to the house, especially to strangers from parts unknown. I appreciated said rule, but it didn't stop the hardcore pilgrims. Students from Virginia, hippies from California, and clean-cut business types all made their way to the house at various times, often without an appointment.

I got pretty good at the tour, showing folks William's rusted-out Datsun, the Orgone Box in the garage, and the sprawling yard complete with a rusty old typewriter. I would recount what Burroughs' life in Lawrence was like, how he behaved (gentlemanly), and always add a couple of vignettes about hi-jinks involving various throwing weapons, William hollering-MST3K-like-at old sci-fi movies, and the way two-fingers of vodka would become three as the evenings progressed.

While at times said drop-bys were inconvenient for me, I always felt a fellowship with the visitors and an obligation to William to insure that the pilgrims would always leave with a smile on their faces. A dozen or so visited each year-and to a person, they were giddy. I could be sure they would forever tell the story of having a beer on William S. Burroughs' porch.

My favorite story from my time in the house had to do William's cats. He had several while he lived on Learnard but they, too, were gone by the time I moved in. Still, at night, reposed and ready for slumber, I would often feel a slight pushing near the corner of the bed right near my legs. At first, I dismissed it, thinking it was some kind of nervous muscle twitch. After about a dozen occurrences, though, I had to rethink my skeptical notions of the supernatural. Indeed, I reasoned, the pitter-patter was eerily similar to a cat readying itself for sleep. I hesitated to tell Jen, lest she think me bonkers, but I eventually did-and she concurred. So did folks who lived there later.

It seems fitting that William's house would have such friendly visitors, since he was, despite all the words and images in his books, a lover of cats and a curious bird about the afterlife.

Whenever we drive into town from Kansas City, I always go by the house. Miles has visited there a handful of times and always wonders why we stop. Attempts at explanation always fail. Someday I will tell him:

Mostly, though, I just miss William, and I would trade all the memories of the house for just one more vodka and Coke with the Old Man.

Who would have imagined William's drug-drenched days in Tangier writing

Naked Lunch would eventually lead to a house in Kansas on Learnard Avenue, an unlikely kinship, and a tow-headed little boy?

Well, my dear, let me tell you about that...

Mark Luce lives in Kansas City with his wife, Jennifer, and their two sons, Miles and Quinn. He writes book reviews and teaches at the Barstow School and at the University of Kansas. Â»