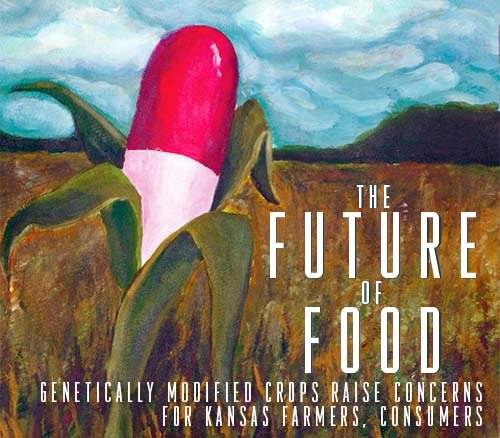 An announcement came last month: Kansas is going to help solve the world's diarrhea problems by hosting a crop of pharmaceutical rice near Junction City.

Two-hundred-fifty acres this year, and up to 3,200 acres later on. The rice contains a protein that could be used in drugs to treat diarrhea and dehydration in developing countries.

Scott Deeter-president and CEO of Ventria Bioscience, the Sacramento, Calif.-based company planting the rice-wrote in an email statement that he was "extremely impressed by the state's clear commitment to biotechnology."

Governor Kathleen Sebelius released a statement saying she was on board. Kansas Secretary of Agriculture Adrian Polansky said the project bespoke of the state's "pioneer spirit."

And Dan Nagengast-executive director of the Kansas Rural Center, a non-profit farmer advocacy group-talked from the basement office of his farmhouse southwest of Lawrence with the alarming intensity of someone who knows he's right and wants somebody to listen before it's too late.

Film Screening: "The Future of Food"

Nature, he says, is not a closed laboratory. This pharmaceutical rice-which Ventria assures will be completely contained to the site where it is grown and harvested-will make its way to the food supply, he says. There are too many uncontrollable variables: migrating birds, flooding, tornadoes, and everyday wind.

The result, he says: One day you or I could be eating diarrhea medicine. 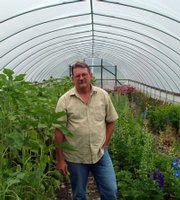 Critics of genetically modified crops, like Nagengast, are quick to question the motives of biotechnology companies.

Are the companies trying to do what's best for the farmer and the consumer, or do they want to seize control of the market to push dubiously tested crops at the expense of natural varieties?

Genetically modified (GM) crops have been on the market for more than a decade, and today they are far more common in some crops than their natural counterparts.

The U.S. Department of Agriculture recorded 68 percent of corn and 85 percent of soybean crops grown in Kansas last year as GM-engineered with genes that are resistant to herbicides or insects.


"Unnatural Selection"A documentary exploring the potential impact of what some scientists consider genetic pollution-genetically modified crops-which, unlike chemical pollution of the past, has the ability to propagate itself continually into the future.Preview, part 1Preview, part 2On Sunflower Cable channel 99 throughout June. Check listings atfilmsforaction.org for schedule.

But Ignacio Chapela-a microbial ecologist at the University of California, Berkeley-says biotech companies are pushing varieties of crops into extinction, which will hurt the world's food supply in the long run.

Chapela points to a controversial study he co-authored that appeared in the journal "Nature" in 2001. He found genetically engineered DNA had infiltrated corn crops in the remote mountains of southern Mexico-the place where corn was first domesticated and where large varieties are still grown and harvested.

"We found it where we were not supposed to find it," he says. "Up to that point some people believed that these organisms could be contained. : This is where we have the world's reserves of genetic diversity for corn. Having that compromised is something that I believe is a very important, very troublesome problem." 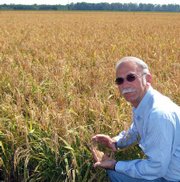 He says that with GM crops taking over the market, combined with their genetic advantages-for instance, having pesticides engineered into their composition-less common varieties stand a slim chance of surviving intact. And less diversity would lead to fewer alternatives for farmers down the line if growing conditions change.

But Polansky, the Kansas secretary of agriculture, says farmers have been genetically enhancing crops through selective breeding-growing only those that cope best with growing conditions-for thousands of years. He describes genetic engineering as an extension of that process. Farmers are simply trying to plant crops with the highest possible yield.

He says people need not fear crop varieties being wiped out. He points to "gene banks" around the world that store seeds of every variety researchers can get their hands on. At K-State, for example, a gene bank houses 2,500 wheat species.

If some unforeseen blight wipes out the predominant variety of a crop, he says, farmers still have thousands of species to choose from as replacements.

But Chapela draws a distinction between varieties maintained in gene banks and the shrinking diversity of crops grown on farms. Without crops growing in their natural conditions, he says, there's no guarantee that they can be simply pulled from gene banks and expected to hold up in nature.

Jordan Ferrand-Sapsis waters some vegetables in the Kansas Mutual Aid Community Garden on the 800 block of Vermont Street. The garden was started in 2005 and provides organic vegetables to the community.

Paul Johnson, an organic farmer outside of Perry, says the reason for the quick rise of GM crops is simple: More GM crops equal more money for the corporations that own the patents to them.

There was a time when plants weren't patented; nobody but God could claim credit for an entire species of corn or canola. Over the past several decades, however, courts have ruled that certain new varieties of plants and, later, GM plants can be patented.

This means that if Monsanto, the world's largest seed company, can make its genetically engineered seeds the most widely used seeds in the world, it can corner its competition. No one else can sell those seeds because no one else has the patent.

In fact, GM corn, GM soybeans and GM cotton have gone from comprising virtually no share of their U.S. markets to the majority in just the last decade.

Critics of GM crops say biotech companies have been so eager to make money from their highly marketable and profitable varieties that they've pressured the government into allowing them into the market before researchers had determined their safety.

The Food and Drug Administration's stance is that GM foods have "substantial equivalence" to their traditional counterparts, meaning they're essentially the same and don't have to undergo the rigorous testing of an entirely new product.

"An honest statement about this is that we really do not know enough," Chapela says. "The problem is that nobody tested these things seriously before planting them onto, you know, 100 million acres around the world. Nobody did serious research on them." 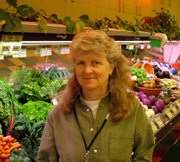 Nancy O'Connor, director of education and outreach at the Community Mercantile

But people leery about the possible health risks of GM foods have trouble avoiding them. For one, they're not required to be labeled. And they're so prevalent-with so much food containing corn or soy products-that even grocery stores that don't want to carry them find it impossible, such as Lawrence's Community Mercantile.

"Consumers shouldn't think because we're a natural food store that they can come here and have no GMOs (GM organisms)," says Nancy O'Connor, director of education and outreach at the Merc. "Because even for a store like the Merc, if we chose to go GMO-free, we wouldn't need a store nearly this size. Consumers should know the prevalence of GMOs is almost daunting."

And because GM foods aren't labeled, she says, allergic reactions or health problems they may cause are essentially untraceable.

"To the average consumer, it's an invisible technology," she says. ": They're put in a system where recall isn't an option."

Thank you Nancy O'Connor for your statement. It is wonderful to read honest education.

I wonder what percentage of the population is ready (or able) to relegate their lawns to growing their own food. Genetic modification has been going on since long before Mendel started playing with peas in the mid 1800s. I don't think the answer here will be an "all or nothing" like the alarmists seem to be touting. I think that if a disease (like soybean rust) takes hold faster than the seed companies can prepare, the public will be in an outrage that the price of their food has shot through the roof, and they will blame them for not having reacted faster with a suitable GMO.

The FDA does test this stuff pretty intensely, despite what a lot of people say. A good person to look up in reference to GM foods is one of the founders of modern genetic modification, Norman Borlaug. There's a good article about him on Wikipedia. He's credited with saving millions (if not a billion) lives because of his work in Africa, India, Mexico, China and the US.