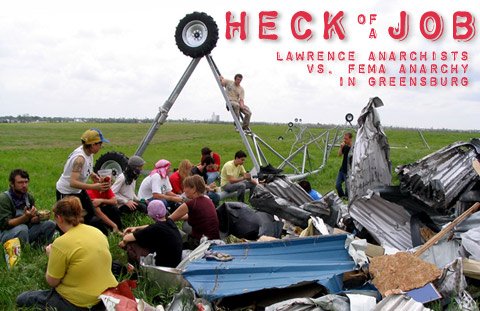 So far as oxymorons go, "anarchist organization" is right up there with "military intelligence" or "jumbo shrimp." Kansas Mutual Aid (KMA), however, isn't exactly a Molotov-hurling band of latter day Guy (and Gal) Fawkes bent on destroying society. A group of collective Lawrence anarchists founded in 2003, KMA prefers community gardening to burning down churches. It was in this spirit of nurturing a sense of communal solidarity-and an admittedly virulent distrust of government institutions such as FEMA-that KMA journeyed down to Greensburg following the May 4 tornado that nearly wiped out the southwest Kansas town. KMA member Jordan Ferrand-Sapsis talked to us about the resultant friction between her anti-establishment brethren and the hyper-establishment bureaucratic mess in Greensburg, their eventual expulsion from the town on what she views as political grounds, as well as the apolitical devastation that visited this tiny community.

Heck of a job

So far as oxymorons go, "anarchist organization" is right up there with "military intelligence" or "jumbo shrimp." Kansas Mutual Aid (KMA), however, isn't exactly a Molotov-hurling band of latter day Guy (and Gal) Fawkes bent on destroying society. A group of collective Lawrence anarchists founded in 2003, KMA prefers community ...

lawrence.com: FEMA, the National Guard and the Red Cross were already in Greensburg following the tornado-why did you think a group of Lawrence anarchists were needed for the recovery efforts?

Jordan Ferrand-Sapsis: Well, the first trip (on May 12) was more exploratory:if we had gone down and found that the groups down there were doing an amazing job and everything was being taken care of in a healthy way, then we could have just hooked up with those groups. Upon going down there, people found a lot of disorganization and a lot of problems with the way the organizations that were already there were handling the situation.

Does KMA have a history of helping out with disaster relief?

A lot of the members of the collective helped out with the clean-up from the microburst (here in Lawrence) last March or were folks that have close ties with Common Ground in New Orleans, which is an anarchist collective that started after Hurricane Katrina and are doing amazing work helping the residents of the Lower Ninth Ward.

What was the reception you had with authorities when you arrived in Greensburg?

The reception from the folks in Greensburg and the reception from the authorities were drastically different. (On May 19) we had spent several hours working with AmeriCorps, an organization organizing volunteers in Greensburg, clearing rubble, working on this particular site at this house. We were approached by members of several different police departments, but specifically the Olathe police department. We were detained for 20 minutes to half an hour : we were told to take our hands out of our pockets and keep them where they could see them, had our IDs run-all of this in a pretty aggressive manner.

Lawrence resident Dave Strano of Kansas Mutual Aid talks with a police officer in Greensburg. Police asked the KMA group to leave town or face arrest because they "were with the anarchists," says KMA member Jordan Ferrand-Sapsis.

Officer Ty Moeder from the Olathe police department said he needed to verify whether we were with the anarchists or not. When we heard that, we all kind of like, "Wow-that's intense." The questioning moved to "How did you get in here? Did you guys hike in?" We were like, "We drove our car in through the checkpoint in the morning." He was really confused about how we got into the city because apparently there had been some sort of surveillance of us in the past. There were pictures, I believe, circulating of members of our group that were passed out to all the checkpoints. We were not supposed to be allowed to get through the gates : even though we were coming in as legitimate relief workers.

Were you on a pre-existing watch list or did they find out you were anarchists after you showed up in Greensburg and then confront you?

Members of the Kansas Air National Guard Unit assist with cleanup following the May 4, 2007, tornado that struck Greensburg.

I have no idea, honestly. KMA is an organization that's been around for a bunch of years and has never really been quiet. Especially after Katrina, we were pretty vocal about how FEMA screwed up the situation and hurt a lot of people and how the National Guard did a lot of awful things down in New Orleans. Maybe that's why we were put on a list-if there is a list. They made us leave the city. Members of the Kansas Bureau of Investigation were there, which is kind of like a local chapter of the FBI. It seemed like officers were taking their orders from the KBI.

KMA has expressed sympathy for the military servicemen who were arrested for looting in Greensburg : you don't actually condone that sort of behavior do you?

Well, I think it's important to know who's making the labels when it comes to things like looting. I think we've seen in the media in the past that black folks in New Orleans "loot" and white folks "find food." Really, I don't necessarily believe that what they were doing is "looting" because I have no way of knowing. I'm not going to trust the law enforcement and that media that's coming out of Greensburg at the moment since it is a very controlled environment.

Try to describe as best you can the level of destruction that you witnessed.

There's nothing left. I think the percentage was 97 percent of the structures in the town were destroyed. If they weren't destroyed completely they're going to be torn down because they're uninhabitable. There's just piles of rubble. There's dead animals. There's no more street signs-they're all spray-painted wood tacked onto posts. There are trees with no bark-the tornado ripped all of the bark off and wrapped pieces of metal around them. There's kids toys scattered everywhere, and people's clothes:their belongings are strewn across the entire town. I've never seen that intense level of destruction. I had a friend who actually did aid work in Iraq : he said the only thing that came close to Greensburg was seeing Fallujah.

Do you personally think that FEMA or any of the other state and federal agencies have done anything right in Greensburg?

They had Pop-Tarts-those were cool. That's one thing.

Great podcast. Jordan is very knowledgeable and well-versed on these issues.