Fans of Minus Story are generally hardcore fans, and for good reason. The band's records are absorbing listens, crafted with the meticulous spirit of a fiction writer or glass blower. Lyrics range from abstract miniatures to emotionally revealing diaries, instrumentation includes a wide spectrum of timbres, and the offbeat rhythms of drummer Nick Christus propel the good ship Minus Story like a defiantly drunk captain grabbing the wheel and steering straight into the eye of the storm. Christus and lead singer Jordan Geiger stopped by to listen to and discuss the group's fifth LP "My Ion Truss," which will be released nationally on June 19 via Jagjaguwar Records.

Fans of Minus Story are generally hardcore fans, and for good reason. The band's records are absorbing listens, crafted with the meticulous spirit of a fiction writer or glass blower. Lyrics range from abstract miniatures to emotionally revealing diaries, instrumentation includes a wide spectrum of timbres, and the offbeat ...

lawrence.com: What does "My Ion Truss" mean?

Christus: He wrote them in a day, too, on tour.

So might there be anything in here for fans of "The Da Vinci Code"?

Geiger: They'll have to buy the album.

Geiger: I was thinking about calling it "The Michelangelo Sequence."

The one-sheet for this release mentions Pearl Jam as an influence as well as Queen, Brian Eno and Roxy Music.

Geiger: The thing about one-sheets that a lot of people don't understand is that if you put a certain band on the one-sheet, usually 80-90 percent of the reviews will include that band. So we're always trying to think up stupid or interesting ways to describe the record. For the last record I was like 'Oh, it's Tom Waits meets Talk Talk' ... But this time we just told the label the main bands that we listen to on tour that we all love. When you're on tour you don't really want to listen to slow, depressing music - which is mostly what's in our iPods. 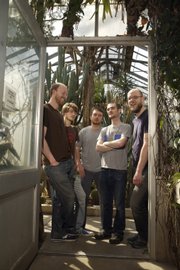 Where did that impulse come from?

Geiger: I think just from playing our old stuff live.

You've done so well with home recording in the past - I know it's been a big part of your process. But not so much with this one?

Geiger: No, not at all. We went to Electric Audio, which is this really awesome studio. Steve Albini was totally hanging out there when we were there, and all of Shellac's equipment was around. It was really exciting, but I didn't do any recording ... The engineer John Congleton (of The Paper Chase) did all that, so we just focused on drinking - and playing music.

Geiger: I do have a cool Steve Albini story actually. Shellac had just come back from tour, so they were really tired and there was some kind of weird zoning thing going on so all the studio people were a little bit on edge. The last day we were there I was joking around with John like, 'This record's going to go straight to the top. This record is amazing.' Steve Albini was like, 'Straight to the top, huh? You should shoot for the middle - it worked for me.' Isn't that great?

What does that mean exactly?

who's the minus story?