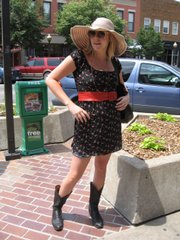 Shopping with a friend for her walk down the hill.

The Salvation Army here was fantastic. They had great stuff.

Two words: Flawed prestige. The notion of matching is a faÃ§ade. Why do we say one thing matches, and one doesn't?

I like how everything old is new again. Also, individuality-that should never be stifled.

What's something you wouldn't be caught dead wearing?

Who cuts your hair?

Replay. With an exclamation point. Above the Tap Room, hands down-for the patio.

'Tudes. I've seen a few this afternoon that need wiped away. Maybe they heard some bad sermons this morning. Fire and brimstone never helped anybody.

Woody Allen. His style is very real and classic. All his clothes are probably four decades old, and he hasn't had to buy new clothes. He still wears the same glasses. He just changes out the lenses.