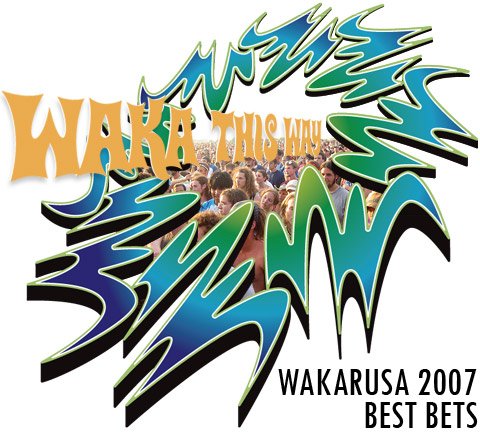 In 2003, the inaugural Wakarusa Festival was met with open arms-and skepticism. But with each passing year and tens of thousands of people through the gate, Lawrence's most ambitious event establishes the kind of staying power that it promised in the first place. Headliners like Widespread Panic and Ben Harper were once but wee daydreams, but this year they'll be backed by a jam-heavy lineup that also sports top draws like Yonder Mountain String Band, Medeski, Martin & Wood and Michael Franti and Spearhead. Toss in more than 100 more rock, jam, bluegrass, funk, alt-country zydeco, jazz, blues and experimental bands and you'll begin to understand why showering and sleeping are way overrated.

For your convenience, we've compiled this compendium of highlights of this year's festival. You can also check out the full schedule of events online or via our mobile edition to set txt msg or email reminders for individual shows.

Earl Greyhound
Thu., 4 p.m. to 5:45 p.m., Campground
(also Fri., 8:15 to 9 p.m., Campground)
As one of the few no-frills rock bands at this year's festival, this trio will shoulder the heavy burden of getting the Led out. The band kicks out paralyzingly loud jams with male/female vocals and drums the size of Dave Grohl's. Mark this one down as the antacid to your jamdigestion.

North Mississippi Allstars
Thu., 8 to 10 p.m., Revival
(also Fri. 5:45 to 7 p.m., Sun Down)
"Hill country boogie" is the term often used to describe the NMAs, a power trio influenced in equal measure by delta blues, gospel and southern rock. Founded by brothers Luther (guitar) and Cody (drums) Dickinson, the band's early recordings were heavily stacked with old blues standards like "Shake 'Em On Down" and "Drinking Muddy Water." In recent years, however, the band has veered more towards southern stadium rock in the vein of ZZ Top or The Allman Brothers.

The New Mastersounds
Thu., 6:15 to 7:30 p.m., Revival
(also Fri., 10:15 to 11:30 p.m., Revival)
This UK instrumental funk quartet draws from the '60s soul-jazz of artists such as Jimmy McGriff, Lonnie Smith and Grant Green as well as New Orleans funk pioneers the Meters. The group inspired one BBC critic to wonder: "How can a collection of (mostly) pasty-faced Northerners produce with such authority the dusty funk grooves of the early '70s?"

Bobby Bare Jr.
Fri., 1:15 to 2:15 p.m., Revival
Besides possessing a gargantuan voice that could wake a hibernating bear, BB Jr. writes some of the most winsome and fragile tunes that the alt-country scene can call its own. But country is merely one of Bare's templates (he is, after all, the son of the great country crooner Bobby Bare), and he's just as likely to dive into amped-up rock and/or horn-section R&B. His latest effort "The Longest Meow" is an anthemic rock record with Springsteen moments to spare.

SeepeopleS
Fri., 3:15 to 4:30 p.m., Campground
Psychedelic sounds and visuals collide in the wonderfully warped universe of SeepeopleS. The North Carolina outfit takes inspiration from the likes of The Beta Band and The Shins, crafting elegant Brit-tinged pop with majestic melodies and creative instrumentation (sitar, mandolin, samples).

Railroad Earth
Fri., 4 to 5:15 p.m., Sun Down
(also Sat., 3 to 4:15 p.m., Revival)
This NJ sextet has the resume of a jamgrass superpower-their 10th gig was at Telluride-but delves far beyond bluegrass to create its hybrid of rock, pop and modern folk flavors. Moreso than its peers, RE is distinguished by the kind of masterful songwriting that puts the song before the jam and recalls voices as diverse as Neil Finn, Robyn Hitchcock, The Dead, The Band and The Eagles.

Ozomatli
Fri., 8 to 9:30 p.m., Sun Down
Ozomatli has spent 12 years pioneering Spanish-English mashups of live band hip-hop, salsa, cumbia, dub, and Middle Eastern funk. This clash of urban sounds gives them mass appeal, though the group doesn't shy away from oppositional politics or frequent shout-outs to their home state of California. The band's fourth studio album "Don't Mess With the Dragon" delves into R&B, ska, and rock riffs that often bear little resemblance to previous hip-hop-dominated efforts.
¢ Video: On The Turnpike

Ben Harper
Fri., 10 to midnight, Sun Down
This singer/songwriter is the archetype for the kind of intelligent genre-bending musician that all the major labels and college campuses are in a huff about these days. Incorporating reggae, rock, folky finger-picking and bluesy slide guitar into his masterful repertoire, Harper has attained mass appeal on his own terms. Much of this can be attributed to his alternately fiery and intimate live performances, passions that he has juggled for the duration of his 15-year career. Live, Harper assumes full-on festival mode with extended radio faves like "Steal My Kisses" and "Suzie Blue."

The Slip
Sat., 1:15 to 2:30 p.m., Revival
(also Sun., 5:15 to 6:30 p.m., Campground)
The Slip is a bit of an enigma in the world of modern music. The jam scene has adopted them as one of the most exhilarating live music experiences around, while the jazz and rock worlds have affectionately embraced them as rebels with a cause. The group's latest LP "Eisenhower" (Bar/None Records) is a jubilant rock record that marks a paradigm shift in the group's ever-evolving journey.

Widespread Panic
Sat., 8:15 to midnight, Sun Down
It's no secret that the Wakarusa crew has been chasing Widespread Panic ever since the festival's inception, and the band responded by committing to play an epic four-hour set. Unlike other road-warrior jam circuit bands, WP won't necessarily fill up the time with aimless noodling. Loose, rootsy songwriting has been a focus since the group's inception in 1982, and those chops have been sharpened via collaborations with artists like Vic Chesnutt and recent albums that favor a leaner and meaner approach.

Asylum Street Spankers
Sun., 11 to 11:45 a.m., Campground
Austin's ASS have built a cult following devoted to their eclectic brand of ragtime, vaudeville, acoustic blues, early jazz and country & western, incorporating traditional numbers from the '20s and '30s into their now-amplified sets. But don't go thinkin' The Spankers are a bunch of PBS-watching ninnies-their album "Spanker Madness"" revolved entirely around smoking ganja, and crowd favorites include nasty novelty songs like "Everybody's Fucking But Me." Much to the chagrin of decent people everywhere, the group's latest effort "Mommy Says No!" is a children's record.
¢ Video: On The Turnpike

Medeski, Martin and Wood
Sun., 6:30 to 8 p.m., Sun Down
MMW are the originators-or at least the modern-day maximizers-of the organ-jazz sound. Countless improv-happy disciples consider the trio's catalog the Holy Grail of groove-based jazz, writing the book on ridiculous drum breakbeats intermingled with fuzzed-out B3 organ riffs and upright-bass breakdowns. The group's latest LP "Out Louder" reunited the group with guitar great John Scofield, who employed the trio on his 1997 "A Go Go" album.

Michael Franti & Spearhead
Sun., 8:30 p.m. to 10 p.m., Sun Down
During the course of his two-decade career as a punk rocker, hip-hop MC, acoustic statesman, R&B crooner and funk barnstormer, Michael Franti has proved that the medium is secondary to the message. His recent album "Yell Fire!" is a response to his travels in Iraq, Israel and Palestine, where he learned that people in war zones would rather not hear songs about war. The songwriter and his band Spearhead visit Wakarusa on the heels of a show at California's notorious San Quentin State Prison and en route to Bonaroo.

wow, I can't believe Les Claypool didn't make the list, but maybe I should have known...

They're coming. The festivalgoers. I can smell them on the wind. Ditchweed smoke, patchouli oil and trustfund money.