Bad: Still bogged down with the board game side of things

Most series try to hide the sequel number in the title once it gets a bit too high. Tony Hawk became Underground, American Wasteland, and Project 8. Burnout became Revenge and Paradise. Pokemon just added a bunch of random colors to the end of the title. Not Mario Party:..this series features the "8" right up there at the top. Yes, there have been eight full games featuring Mushroom Kingdom inhabitants running around on a gigantic board game. Amazingly, the series still very much resembles the original N64 title from 1999 (which can be a good thing or a bad thing based on how much of a fan you are).

Obviously, this series needs a fire lit under it. There have been very minor changes and character additions from title to title, but it essentially felt like the same experience every time. It seems like the obvious chance for change would be its first Wii installment, allowing the series to give the minigames a breath of fresh air thanks to the motion controls. Sadly, it feels more like a half-baked Gamecube port with some added motion-based games.

Most of the games that actually use the motion are simple point-and-click affairs. You'll shoot targets and falling cards, but none of these minigames are particularly engaging. There are a few that are genuinely fun, such as the homerun derby and one that requires you to shake up a soda can. 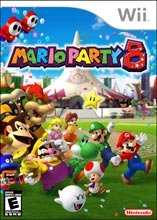 For some reason, a ton of the games feature generic control schemes that don't utilize motion control in the least. Many of them require you to hold the remote sideways and just hit 2 to jump. These games weren't particularly fun on the 64 or Gamecube, and they're still not on the Wii.

Whereas the minigame genre was served up well with the rapid-fire Warioware Smooth Moves, they're far more spaced out in Mario Party 8. Like always in the main Party Mode, you only play these games after everyone has taken their turn traversing the game board. This wouldn't be so bad if it weren't for the constant text interruptions. You'll have to deal with shop owners peddling you candy, turtles attempting to buy your items, and various other holdups. Even if you have a fun time with a minigame, it's a drag to go back to the game board and realize you'll have to wait another couple minutes to play another. If you'd prefer, you can play various other modes that allow you to bypass most of the board game annoyances, but these still don't stack up to the fun of Warioware.

For some unknown reason, all of the gameplay in Mario Party 8 is presented in 4:3. The menus are in full 16:9, but it gets letterboxed once you get to the board. I realize the Wii isn't a HD-capable system, but it's inexcusable to not even offer widescreen support at this point. It doesn't help that the visual package wouldn't even have been impressive on the Gamecube. On the audio end, if you've heard one Mario Party game, you've heard them all.

I was very excited about the potential of this title, but ended up disappointed at what seems like a lackluster port of a Gamecube effort. This series needs a fire lit under it, and hopefully the next entry will be far superior (which it very well could be, considering it will be built from the ground-up for the Wii). Fans of the series will find more of the same with Mario Party 8, for better or worse.