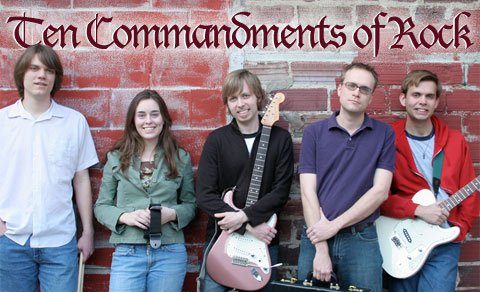 Marry Me Moses is (from left) Mark Harries, Jenny Davidson, and the brothers Kritikos: Alex, Ted and Henry.

Marry Me Moses could be the name of a nun's autobiography or a Judeo-Christian marriage seminar. But here in Lawrence, Marry Me Moses is synonymous with face-melting rock riffs, more or less. Composed of three Kritikos brothers-Ted, Alex and Henry-as well as bassist Jenny Davidson and drummer Mark Harries, the industrious group recently ascended Mount Sinai (a.k.a. Neighborhood Studios), and recorded their debut tablet (a.k.a. album). "Engine Engine" is a 10-song mosaic spanning pop rock, glam rock, indie rock, '70s rock and just plain rock. The whole shebang is fearlessly commanded by high-register vocal acrobat Ted Kritikos-also heard in the local "Jesus Christ Superstar" rock ensemble. Four of the five Moseses (excepting Henry) stopped by our podcast studio to listen to the new record and tease Ted about his girlish voice.

Marry Me Moses could be the name of a nun's autobiography or a Judeo-Christian marriage seminar. But here in Lawrence, Marry Me Moses is synonymous with face-melting rock riffs, more or less. Composed of three Kritikos brothers-Ted, Alex and Henry-as well as bassist Jenny Davidson and drummer Mark Harries, ...

No-fi highlights of the interview

lawrence.com: So Ted is Mary Magdalene in the local rock production of "Jesus Christ Superstar." Is it ok that I share that with people?

Ted: Yes, that's just fine. In fact, we did that at Wakarusa and I had to endure an entire day of people calling me Mary. But that's ok.

Is that a role that was originally sung by a female or a male?

Ted: It was originally sung by a female. I kind of sing like a girl ... I'm very comfortable with my vocal range. I think the Lawrence Journal-World has called it a soprano, but we like to call it a tenor.

Marry Me Moses / The Eudoras

To be honest, Ted, I don't think you sing like a girl.

Ted (in a girly voice): Thank you.

I just think you have a good range.

Ted: You know who else sings like a girl? Robert Plant.

So tell me about the title of the record.

Ted: Upon listening to the album, I was struck with how fast we played all of the songs. So I wanted to pick a name that had some sort of momentum to it. I thought about "Engine," but that wasn't very good. So I thought up "Engine Engine."

Alex: It was a lot better than the previously suggested title of "Ass-trology."

I get the impression that you guys are tuning into the oldies dial when you're cruising down the highway.

Ted: It's definitely '70s and '80s and early '90s oriented. There's very little that a contemporary audience can latch on to.

Lyrically ... tell me some of the stuff you were thinking about.

Ted: Well, essentially we've made a pop rock record. I think that's safe to say, even though our shows have become much more garage rock-ish. Within that genre, I try to write lyrics that are about girls ... Sophisticated girly love songs.

Mark: About immature love described in a mature sort of biblical-referenced way.

Did being involved with "Jesus Christ Superstar" influence the content of this record?

Alex: Didn't we once rearrange some of these songs and turn it into a rock opera?

Ted: Some of these songs originally appeared in a rock opera about Paul Bunyan.

Ted: We started there because I thought it would be something that no one on earth has ever done before; we would be first ever Paul Bunyan rock opera.

Alex: And coincidentally, we were slated to enter a battle of the bands and needed an edge.

Ted: But then we typed "Paul Bunyan Opera" into Google and it turns out there is one already. It's not a rock opera, but there is a Paul Bunyan opera.

Mark: I think it's a comic opera. Ours is serious.

So what sort of themes carried over from that to "Engine Engine"?

Ted: The kind of angrier songs I had originally intended to be sung by the villain of the rock opera. There are different personas that make their appearance on the album. There's also a song about lumberjacks ... lines about chopping down trees and stuff. If you look for it you'll find Paul Bunyan references everywhere.

So my challenge question for you is: How would you compare the saga of Marry Me Moses to the saga of Paul Bunyan?

Mark: A pretty equal number of pancakes involved, I think.

Alex: I wore a lot of flannel in high school.

Ted: I am incredibly tall.

Why, cause they're "kids"? I guess that means rock is......old and curmudgeonny? Not the way I understand it.

This is a great band to see live. They have tons of energy and play together really well.

I've seen this band perform 3 times now and their stuff just keeps getting better. I can't wait to buy their new record this weekend!

marry me moses can rock it...rock it like nasa. gravity can't even hold them.

and those rockers that you, mr ramirez, so idolize? how old would that have been when they started feeling the passion to rock? eh? were they hyped up, drugged up kids themselves? all nerdy and awkward and full of noise?

This band is awesome. And cute. Go to their show. Buy their CD. Buy several. If anyone asks, just tell them, "KritikosMom said."

MOM! You're messing with our street cred!

I've been checking out Lawrence bands (i.e. drinking in shitholes) for 20+ years, and Marry Me Moses is one of the most inspiring, least-affected outfits I've ever had the pleasure. They combine a command of their respective instruments with a fresh and impossible-to-pin-down take on the history of post-Doris Day pop music that makes me forget how frequently my joints ache nowadays. Their intelligence and passion is as obvious as an Andy Rooney commentary, and they know as much about constructing effective riffs and choruses as most local indie rock bands know about waking up at 2 PM. Every song rings with some hook or phrase that insures that I remember it even after I leave the bar at 1:37 AM after six bourbon and club sodas. Their recent insistence on playing sloppy shows with nearly garagey sensibilities is a friggin' splendid thing rife with possibilities. They would sound nifty sandwiched on a bill between mid-80s (pre-Nirvana, when the possibilty of worldwide fame for being a bit "edgy" while writing songs that would be rejected by Krokus, let alone Cheap Trick, was unfathomable) bands like Big Dipper and the Reivers, to cite two of way too many potential examples. They flat-out thrill me. As far as not knowing what "rock" is (besides a dead, joyless thing that has about as much relevance as a Playskool Take-Apart Car at this late date)...well, I do know that Ted thinks the Association are better than the Turtles, and I think that's pretty fucked up.

Stay off the message boards Shammie, you'll get Jon in trouble with all the cursing...

Anyone complaining about the lack of "rock" would do well to come out on Saturday night to the Bottleneck and see three bands who all, in fact, rock.