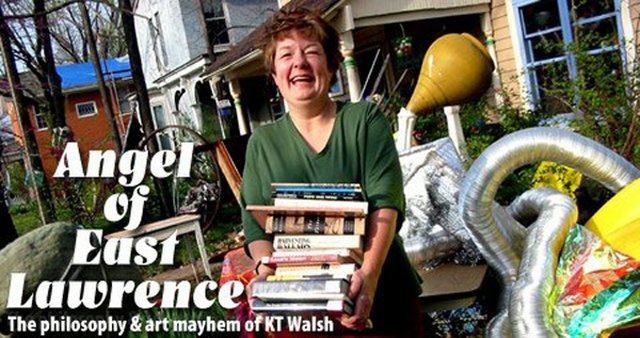 Good cheer and industry: these are the wares KT Walsh peddles through her art. Thirty minutes on her front porch leaves you thankful and all the richer.

Birds sing. Cyclists ride by, smiling. Neighbors and a three-legged cat stop to juggle topics from ghosts to moxa sticks to cheap stilt-making. All around you-at your feet, over your head, even the chair you're sitting in-is art.

"It's just always been there," smiles Walsh, sheepishly.

She's a compulsive artist, marrying pre-existing, found objects to traditional materials like paint, chalk, and poetry. Nature plays into the sculptures, too, as does her old house. The result is frenetic, but oddly homey. Comfortable. This is a celebration of life at its most blessed-completely harmonic, intrinsically bizarre, gorgeous to see.

Her love of discarded things has been with her since the beginning. "When I was little, we lived near a dump" in Minneapolis, she said. "My little brother Paul and I would go. It was before the EPA, and they didn't care what you did in there. You could get down in and build forts and make things.

"It was so much fun. Until my brother lit the dump on fire, and we couldn't go back anymore."

When she left home for college in Albuquerque, New Mexico, her found-object lust followed. "I got in big trouble in a dorm because I love tumbleweeds," she remembers with a smile. "I completely covered the ceiling, the floor, the walls. I kept a little path, but it was a complete tumbleweed environment. It seemed really soft once it was there." Although the fire marshall may have agreed, he forced her to clear it out.

Most Lawrencians know Walsh in one of two ways: as the gentle but firm voice fighting for neighborhood rights at city hall, or by her yard, which is what led her to politics.

A little more than a decade ago an anonymous caller complained about her yard art. A three-page report written "by some poor city inspector" declared the umbrellas in her trees a hazard because they could possibly fall through a windshield and injure a driver. "It was crazy," Walsh remembers. "I was not political, I was not brave, I would never go to city hall. So I had to do a petition drive, and I called the city newspaper because people needed to hear."

The story was picked up by national media outlets. "The Associated Press came by because they thought it was funny. But for me, it was not funny. This is what I do for fun, to make people happy. I was so hurt," she remembers.

Community support-people hanging umbrellas in their own trees, on porches, and even wearing them in their hair-turned the tide in her favor. It also sparked a shift in Walsh: "I learned that you can go to city hall, and you can have petitions and you can gather support and you can make something happen. That really changed me."

Walsh's home, her yard, her way of dressing are a microcosm of how she thinks the world should be: completely, utterly saturated with art.

"As we go through our daily lives-we go to the gas station, to the grocery store, to our jobs, picking up the kids-it seems crazy that there isn't art everywhere in each of those daily functions," she laments.

"Art in a formal sense," Walsh clarifies, "where we agree to make something, or agree to come up with a concept. I want that to be happening more from inside us, instead of watching someone else do it."

As a here-and-there student throughout her life, taking classes when time and finances allow, Walsh points to the campus at Johnson County Community College as an example of how art should infiltrate our lives.

"You're surrounded by their art collection," she said. "Between classes, I could go and be with these incredible photographs or sit with this sculpture and really study it. Or with these world-class ceramics in the halls, not stuck in some chancellor's office, but out where the students are. I can't tell you what a message that sends. It says, hey, art is with us in our daily lives, and that is as it should be. It shouldn't be closeted away."

Walsh is taking her philosophy home, literally, at this month's Seed Artist's Lecture. Rather than set up a screen at the usual location, she is inviting the public to her house at 732 Rhode Island. Attendees will first engage in "art mayhem"-making their own art, enjoying the scene, and listening to DJ Zippy-before a lecture (or Walsh's interpretation thereof) at 8:30 p.m.

Walsh's hope for the Seed Lecture is full, festive audience participation. She recognizes some people will enjoy the free-form creativity; others need structure and are more comfortable with assigned tasks. That's okay, she says. The key is doing it: "If you haven't physically gotten your fingers in the paint, or on the chalk, or tried to draw a house, or some sort of something-if you only approach it through your mind-you're not going to get it, because some of it has to be through your body," she said.

IMHO, all childhood stories should end with, "and then my brother lit it on fire, and we couldn't go back anymore."

Oh, and I don't want to alarm you, Ms. Walsh, but your yard may be infested with monkeys, albeit ones invisible to the adult eye. When I drive past, my daughter invariably yells, "Look, Mommy! Monkeys playing!"

go to PictureLawrence.com to see many more pics of KT's yard art

....aand go to http://redballoo.ning.com for a compehensive list of art events around town all summer long!!

Is she gonna end up on that show on KCPT with those two guys who drive around looking for weird old people who make yard art out of anything they can find? Should they be alerted to her genius?

She was on their premiere episode. Go troll somewhere else, asshole.

Er, wow I didn't mean for that to elicit an "asshole" comment. I liked the article and while I didn't get a clear idea of her body of work, she's an interesting chick. (are there any pics anywhere?)

Again, sorry. I like the aforementioned show and the work of those eccentric people they showcase...maybe I wasn't as clear about that as I should have been.

oh, thanks Derald for the link to her pics......didn't notice your post initially.