The Geek Shall Inherit the Earth

My time on VH1 by Eric Melin

There are some serial TV shows I will tape to make absolutely sure that I don't miss an episode-"Lost," "24," "The Shield," "The Office." My priorities may be a little out of whack, but staying on top of my favorite TV shows is more important to me than paying my bills on time.

Last summer, I took it a step further-I taped every single episode of a game show.

The first season of VH1's "World Series of Pop Culture" sucked me in immediately. Finally, a game show created specifically for people like me who only remember things with no practical value. There is no price guessing, no vowel buying, and you don't have to know what two U.S. presidents were members of the Union Party to do well. And screw "Jeopardy"-this show asks the questions that matter, like:

"What 14-year-old actor lied about his age to play Tyrone Miller in Apocalypse Now?'"

I realized that I was born to be a contestant on this show quicker than you can say Laurence Fishburne.

The format of the show kept me hooked-the whole series is played in a "Sweet Sixteen" tournament format. Teams of three compete against each other, but only one person from each team squares off at a time. The first team to have all its players eliminated for missing too many head-to-head questions loses the match-brilliant! It satisfied my need for competition and continuing drama. I picked a favorite team and kept tuning in to see if they moved on.

As the show progressed, realized I didn't want to be one of those people who sit on their couch complaining that they know all the answers, but never do anything about it. I called my longtime friends J.D. Warnock and Andy Morton and gave them advance notice. Whenever or wherever auditions were being held for season two, we were going.

We weren't alone. Twice as many people as last year showed up in March for the auditions-over 10,000 other people apparently thought this show was meant for them as well. The written test weeded most of them out right away. It was brutal-way harder than the televised questions. Every member of your team had to pass a certain score-no weak links allowed, and no team averages.

For the test, we'd flown to Austin on our own dime. After it was over, I wasn't very confident about my performance and neither was Andy. J.D. had a big grin on his face and was sure we'd passed. He was right. We made it through the rest of the three-day audition and were eventually picked as one of the 16 teams to compete on season two!

In the month that followed, we studied like mad. I watched every episode of Season 1 online and transcribed all the questions and answers. Based on what was already asked, each of us made up cheat sheets and questions for subjects we knew we were weak in, and then shared them with each other. I'm good with older stuff-but the newer it is, the less I know. If host Pat Kiernan asked me to name the cast of "Facts of Life," I would just automatically know the answer, because this is the kind of useless information that has always stuck in my head ever since I was a kid. If, however, he asked me about the contestants on "American Idol"-a show I've never seen- I needed to be prepared. So I memorized. And memorized: With Sanjay Malakar snugly nestled in the recesses of my brain between "Princess Bride" quotes, I felt like we were ready.

Meeting the other teams was a frightening experience. At the airport we met Todd from the team Almost Perfect Strangers 2.0. He flew in from South Carolina after winning a nearly impossible online quiz that thousands of people took individually. The top three were thrown together once they arrived in New York to make one badass all-star team. When Todd confessed to being careless and actually getting one question wrong, the fear started to set in. We hadn't even reached the hotel, and I was already worried about the competition. I may know that Fishburne tricked Francis Ford Coppola to get cast in his movie, but what obscure "Saved by the Bell" answer would Todd pull out on national TV to send my team packing?

We kept telling ourselves that we had already won just by being on the show. It was a free trip to New York and four nights in an expensive hotel just around the corner from the Empire State Building. But the bottom line is that I'm too competitive. I want to win. Winning, by the way, meant your team got $250,000 and the chance to defend your title the following year.

Everybody got to choose their own team name, with some help from the show's producers, of course. I wanted to be called Smell the Glove, after the famed fictional Spinal Tap album, but apparently that was too racy for the network that aired "Flavor of Love." We eventually settled on Westerburg High, a reference to the high school in the movie "Heathers," and the singer for the Replacements, Paul Westerberg-whom the school was named after. To make it a triple-obscure reference, the team name was silk-screened on our T-shirts in the same font and style as the logo of Cheap Trick, one of our favorite underappreciated bands.

From the first group meeting of all the contestants, a strange dynamic was born. There were teams that seemed hell-bent on talking only in pop culture references, and those who just wanted to have a good time. The Twisted Misters, three NYU students in their early 20s, rattled off the members of Third Eye Blind just as quickly as they introduced themselves. Which they did, by the way, by saying "We're the team that's going to beat all of you." 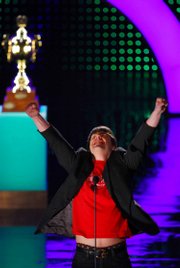 Melin during the taping of VH1's World Series of Pop Culture.

If the show's producers were planning on focusing as much attention on personalities as on trivia, they just got their villains, I thought. Having filled my brain to the limit with factoids about John Hughes movies and "Full House," I didn't want to hear any more trivia talk. I was about to explode. Either the Twisted Misters were trying really hard to intimidate us, or they were just like that. Either way, it worked.

It was a relief, though, to find that most teams felt like I did. It is a weird kind of bond you form with a stranger when you know you are both about to be shot out of the same cannon in front of millions of people. We made friends immediately with the team we would face in our first-and possibly only-game. The Carlton Banks Dance Academy (named after Will Smith's sidekick on "The Fresh Prince of Bel-Air") were really nice. Like us, they were in their 30s-and two of them were doctors. I relaxed a little after learning this, thinking they have far more important things to memorize than the lyrics to '80s one-hit wonders or rapper' real names.

The four hours we spent in "contestant isolation" cemented our friendship with many of the other teams. Besides endless amounts of speculation on what we would be asked, we spent most of our time drinking water and-every 10 minutes-asking production assistants to accompany us to the bathroom so we couldn't "cheat." My bladder felt as big as a dixie cup and I reverted to the second grade, holding my hand up every time it got full.

I also wondered what kind of characters the writers would craft us into. During our pre-game interviews and photo shoots, we were told to be ourselves. But then came the video shoot for the introductory spots. We were given cheesy lines to say that would serve to introduce ourselves to the viewing audience. The crew told us we could change them, but we felt a little put on the spot and opted to make them our own instead. We would never be convincing taunting other teams directly to the camera, so we chose to be mock-convincing instead. Since we were uncomfortable saying things like "You're going down to Chinatown!" we chose to look really uncomfortable, raising a knowing eyebrow in jest or looking ashamed the moment we delivered the line. Making it obvious to the audience that we were roped into saying this stuff would hopefully make it funny. Either that, or we'll look like great big jerks. We'll see how it's edited, I suppose.

Tom Petty says "The Waiting" is the hardest part, and boy is he right. The green room dwindled every time two teams went out for their match, and we just got more and more nervous. Our goal was to at least win the first game, and it was now upon us. Would I be able to recall "Family Ties'" Keaton family history from the darkest depths of my subconscious, or will my personal ban on ever seeing "Dirty Dancing" come back to haunt me on national TV?

Suddenly, we were mic'd up and it was too late to think about anything else. We were onstage:

Sad, I know. To our slight defense though, we also don't have things like wives, jobs, kids, mortgages, or ambitions. What we have is pop culture, so we make do with that. Trust me, we were (or I was, at least) as intimidated by the other teams talking about your actual responsibilities and such as you guys might've been by our endless pc miscellany.

Also, I believe the line was "We're the team that's going to beat you all." Slight difference, I know, but it's all in the emphasis.