Lesson For The Kids: If you ever have a disagreement with a friend, don't fight them. Instead, let your pets kill each other.

It's hard to believe that it's been nearly a decade since the original Game Boy Pokemon games were released and swept the game world by storm. Gamers the world over were pouring hours of their lives into catching every last Pokemon. What's harder to believe is that 10 years later, the formula still holds up just as well, as evident in the series' first pair of DS entries, Pokemon Pearl and Diamond.

The bottom line for these latest iterations is that they're really not all that different from the originals, which works both to the game's benefit, but also detracts from the overall experience. If you've somehow missed out on the craze all these years, the Pokemon games are fairly simple RPGs with a heavy emphasis on collecting the titular creatures: miniature monsters that transport around in pocket-sized Pokeballs and emerge to do battle with one another.

The story this time around is more or less the same as any other entry in the series. You take on the role of a young boy or girl trainer and travel around the country collecting new Pokemon and doing battle with various trainers and wild Pokemon in effort to improve your collection and to earn gym badges that unlock new abilities. The series has never been huge on narrative, and these latest versions are no exception. Regardless, the dialogue is fairly well-written, and there are literally hundreds of characters and items to interact with. 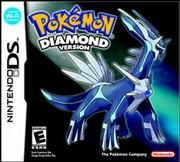 The series' strong suit has always been gameplay, and Diamond and Pearl hold up quite well. The game takes place from a top-down perspective as players wander the world interacting with other characters in town and fighting Pokemon in the wild. Battles are a fairly straightforward turn-based affair where the two sparring Pokemon can each use one of their four abilities. As your Pokemon win more battles, they gain new abilities, increase their statistics, and occasionally evolve into better types of Pokemon.

With combat itself so simple, a big part of the game's strategy lies in organizing your team. At any time, you can have six different Pokemon with you, and selecting them and leveling them takes a bit of effort. Each creature has a specific type such as flying, fire, grass, etc. In a more complex paper-rock-scissors fashion, each type has a correlating type it's strong against and one that it's weak against. Because of this, you'll spend hours tweaking your team to best prepare for any situation you come across.

For Pokemon veterans, this is all standard fare. However, the DS versions present a number of upgrades that will interest even the series' oldest fans. First and foremost, there are over 100 all-new Pokemon to collect, pushing the grand total to nearly 500. The game also makes use of the DS's touch pad, although none its uses are necessarily game-changing. Players can navigate menus with the touch pad as well as select moves for their Pokemon in combat. It's a nice little addition, but it would have been nicer to see some more interactive uses.

Perhaps the biggest upgrade to the series is the addition of online play. Using the DS's Wi-Fi capabilities, players can trade with, chat with, and do battle with players around the globe. It's a great new feature, and surprisingly well implemented. Even after you've finished the game's nearly 40-hour storyline, expect to pour many more hours of your life into the online features.

The biggest disappointment in the new games is technical in nature. The overall look and sound of the series has been upgraded slightly to take advantage of some of the DS's capabilities, but this still basically looks like the same game we've been playing for a decade now. Some of the environments feature polygons, but the overall look is still very 2-D. Your Pokemon still use the same still-frame animations they've used since the originals, which is a shame considering what we've already seen is possible in the Nintendo 64 games. Overall, the game doesn't look bad, it just would have been nice to see it take full advantage of the DS's capabilities.

If you've missed out on the Pokemon series all these years, Diamond and Pearl are a great place to jump in. They retain everything that's made the series good all these years while adding some much needed new elements. Sure, the graphics and sound could use some work, but that's nothing they can't fix for the next game.