Remember high school, when every student was unfathomably attractive? When Monday mornings were for catching up with your shirtless homeboys and bikini-clad muffins after an arduous weekend of shopping and kissing practice, and the weekend was there again so quickly you barely had time for your after-school fashion model job?

Welcome to Konami's Brooktown High, or as I like to call this morally reprehensible little gem, The Training Manual for Deserving School-Shooting Victims.

From the ample, glistening decolletage of all the female characters to the lack of any real variety between characters, this title plays out like an extended "customize player" menu. Unlike RPGs and Sims games, there is only one path you can take-the path to popularity, with the pinnacle of your entire existence being Prom.

Life at Brooktown starts on Monday morning. Every single Monday you wake up and fall out of bed (which you never do get checked out-you've still got your looks, after all). You change your clothes or buy some more on your computer. You go to school. You talk to people. You find out that they're assholes, but it's okay- so are you! You can ask people out on dates if you've built up enough charm points. And then you go to class-until Friday after school. 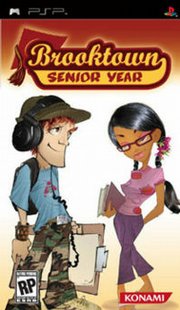 The classroom is a Bermuda Triangle-esque time vortex where there are no Tuesdays, Wednesdays, Thursdays, or Fridays. You emerge after not having eaten for four days, none the worse for wear, ready for your after school job-unfortunately, there's no evidence that you've survived this long by ingesting your fellow students. Detention is in the same time-sucking dimension, but you're delivered there after being electrocuted by the "Truancy Bot" if you're late for class. Unfortunately, this does not bestow upon you a merciful death. And yes, I said "Truancy Bot."

After a rough week, you're ready for the weekend. You wake up Saturday morning with the same pesky case of the clumsies, but you're still smokin' hot. Now is the time to make calls, study, go on a date, or shop for more clothes or items that are meant to flatter or seduce your fellow jerkwads. But like most actions in the game, giving gifts to fellow players in no way affects your interaction with them. They may love the gift and then tell you to get the hell away from them. The character reacts the same whether they're someone you've just met or your steady girl/guy.

Similarly, the vapid Abercromboid you've been dating for three weeks will suddenly hop on her academic high horse and refuse to date you until your grades come up if the computer decides you haven't been studying hard enough. As if grades would matter at Brooktown.

If you achieve certain goals (like doing demeaning favors for people you just met), you'll be rewarded with a special power-up called "Ultra Cool," which maxes out all your stats for a limited period of time. You'll be so completely irresistible that you can walk up to anyone without fear of embarrassment and ask them out, at which point they may or may not accept, as if you hadn't used your "Ultra Cool" at all.

Weekends are also for upping your stats with any/all of the three (Woo hoo!) mini-games. You can practice kissing in an Galaga-style game of "Tongue Twister," where the object is to capture as many hearts with your lips while avoiding teachers, televisions, cellphones, and halitosis. There's also "21 Knickers," a PG-rated strip blackjack game, and "BoogieTron 5000," a DDR/Gitaroo Man amalgabortion. The boosts you can earn are so minor that you're forced to endure these tortuously boring and paltry games dozens of times to build up enough charm, originality, athletics, and smarts just to get a date with someone who may dump you at any time for not posting pictures of her rival's knees on the internet. Don't ask. And it may surprise you to find that originality and smarts don't count for much on your road to banality/supreme hottitude.

But that is the very point of this entire unforgivable exercise. Strive for popularity at any cost. If it means humiliating a classmate, awesome. If it means prostrating yourself before some shirtless pinhead, zippety-freaking-doo-da.

I entered into this bold experiment with the best intentions. My first time through the game, I used my real name in order to immerse myself completely into the world of Brooktown High. My first task was to take a quiz that would determine my initial stats. I was labeled a rebel, with some nerd tendencies. Fair enough. Choosing a body and features proved eye-opening, as the choices were tall and hot or a little bit shorter and hot. Ovular was not an option, so I went with the shortest, heaviest avatar, who was neither short nor heavy. So much for the realism of a completely immersive simulation.

This first time through, I tried to treat people with fairness and compassion. I got nowhere. I tried to befriend the goth girl who no one really liked, but she turned out to be rebellious only against individuality. It bears noting that as your popularity points go up, your originality points go down, without affecting your dating potential.

I did manage to get a steady girlfriend for a couple weeks-a deep, conceptual artist named "Chaos," who dumped me at the Spring Formal because she didn't like my clothes. I began to doubt that it was true love to begin with, but I tried to salvage the relationship anyway-not easy, since my options for reconciliation were "Kiss her," "Go for it," or "Dis her."

Long story short, I missed prom, got into the college of my choice, became a professional volleyball player, and attended my high school reunion alone. I was told that things may have worked out better for me had I hooked up at Prom.

For my next foray into the mire of Brooktown High, I chose to be "Lyle," a sexy blonde athlete with permissive parents and a generous allowance. I took every opportunity to "dis" nerds, "go for it" with girls, "dis" girls, and "go for it" with nerds. I diligently practiced my kissing every Saturday after shopping. I found my soul mate in a girl named "Biscuit," and we fell in love. Spring Formal was heaven, but ended abruptly when my end-of-night indecent proposal was delivered with a lack of confidence. "Oh well," I thought. "There's always Prom."

Thankfully, Biscuit and I were still steadies when the big night rolled around, in spite of a few rough spots encountered due to this chocophobic volleyball player's inexplicable concern about my low physics grade. Happily, she consented to go to Prom with me because I had "gotten pretty popular." JOY!

The day of Prom I changed into my best formalwear and headed out the door to: crash. Not the car crash that so many Prom couples find so popular, but a game crash. I restarted, redressed, and: crash. Believe it or not, I attempted to get to Prom about six times before giving up. Brooktown High had suddenly gone from "poorly conceived" to "poorly executed" as well.

My post-sex change high school career as Lynnzee doesn't even merit writing about. Let me just say that my hair sucked.

Wedgies all around for Konami for producing this loaf of candy-coated excrement. In the hands of the well-adjusted it's simply tedious and stupid. In the hands of the impressionable, it's far more dangerous than internet pipe bomb instructions, schoolyard drug dealers, or anything in the Grand Theft Auto franchise. This insidious, irony-free dating simulator is the most treacherous thing to come from Japan since Tojo.

This is a great review --- i tried this game a couple of times - the first time i admit i made the mistake of sitting down at my dest to Review Classes while waiting to go to the prom. i thought a little alarm would say "you have 1 hour to prom" didnt happen, Though i slept through prom i had a great life.

The second time i tried this --- had the date and everything and bang Prom day arrived and i could NOT get of my room.

Is there a trick to getting out of the room for Prom i am missing?