SUCKA' NCAA DIVISION I COLLEGE BASKETBALL PROGRAMS FROM THE CENTRAL UNITED STATES SHOULD CALL US SIRE!

The Jayhawks overcame a 16-point deficit and a powerhouse performance from the Longhorns Big 12 player of the year, Kevin Durant, to beat No. 15 Texas 90-86 Saturday, claiming its fifth Big 12 championship. Durant missed several minutes of the second half after aggravating an ankle injury (suffered Friday during practice). He finished with 32 points and nine rebounds, after scoring 25 in the first half. The win marks the 1,900th all-time victory for Kansas and gives them the No. 1 seed in the Big 12 Championship in Oklahoma City next week.*:The win comes as a relief to local entrepreneurs who had already printed thousands of "Big 12 Champions" t-shirts, which otherwise would have been used as kindling to burn sophomore Sasha Kaun at the stake. 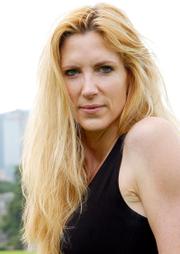 At a convention with most of the Republican contenders for the 2008 presidential nomination and Vice President Dick Cheney in attendance, right-wing author and provocateur Ann Coulter stirred up controversy with comments about Democrat John Edwards. "I was going to have a few comments on the other Democratic presidential candidate, John Edwards, but it turns out you have to go into rehab if you use the word 'faggot,' so I-so kind of an impasse, can't really talk about Edwards," said Coulter at the Conservative Political Action Conference, shortly after being introduced by GOP presidential hopeful Mitt Romney. Romney, Rudolph Giuliani, and John McCain (who was the only major Republican candidate not in attendance), all denounced Coulter's language. The Edwards campaign responded by saying Coulter was "resorting to the classic right-wing strategy of riling up hate."*:Many found Coulter's gay bashing hypocritical, as the commentator has long been involved in a loving, homosexual relationship with former NBA star Tim Hardaway. 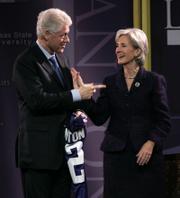 AS BILL AS YOU THINK

Former President Bill Clinton visited Kansas last week, making stops in Manhattan and Topeka. He spoke as part of the Landon Lecture Series at Kansas State University, on topics ranging from diplomatic relations with Iran to America's looming healthcare crisis, then came to Topeka for the Kansas Democratic Party's Washington Days fundraiser. "The whole country is looking at you," Clinton said to the 1,500 Democratic activists and donors. "You did a great thing by broadening your base and bringing in people who were active members of the Republican Party." Christian Morgan, interim executive director of the state GOP, said Clinton's visit served "to remind all Republicans why we love Slick Willy."*:Clinton, unfazed by the GOP sarcasm, was later found fondling the dome of the State Capitol building.

The mass firing of eight U.S. Attorneys last year became a growing scandal for the Justice Department and Republican lawmakers after one of the dismissed federal lawyers last week publicly claimed he was part of a political purge. Attorney General Alberto Gonzales initially attributed the firings to "performance-related issues," which the fired attorneys strongly reject, pointing to recently uncovered performance evaluations. Five of the eight attorneys were involved in corruption cases against GOP lawmakers at the time they were let go, and former U.S. Attorney David Iglesias says he was fired because he refused pressure from Republican Senator Pete Domenici to bring indictments against a Democratic candidate before the November elections. Congress is mounting an investigation of the purge and will hear testimony from the fired attorneys and Justice Department officials this week.*:Also included in the purge were "poorly performing employees" who, by sheer coincidence, were all beating Alberto Gonzales' team in the office fantasy football league.

Wall Street suffered a turbulent week following the biggest single-day drop of the Dow Jones Industrial Index since the September 11 terrorist attacks in 2001. Stocks fell by 546 points on Tuesday afternoon, spurred mostly by a drop in China's market, but also by a Dow computer glitch, which dumped a backlog of trades all at once. Traders saw the index fall several hundred points in a matter of minutes, creating the impression that the sell off was even worse than originally thought. While the frenzied trading subsided as the week progressed, the market never fully recovered and erased all of the gains made this year.*:While most sectors saw a decline, analysts predict a bright future for stocks in canned goods, firearms and roving-mobs-of-post-apocalyptic-flesh-eating-mutants-proof durable goods.

With only a 14 percent voter turnout, political newcomers Mike Dever and Rob Chestnut took the top spots in the City Commission primary that narrowed the field for the April 3 general election from nine to six candidates. Dever and Chestnut-businessmen who received the endorsement of the Lawrence Board of Realtors-were by far the best financed candidates. Dever and Chestnut will be joined on the general election ballot by current commission members Boog Highberger and David Schauner, as well as by first-time challengers Pastor James Bush and retired social worker Carey Maynard-Moody.*:The other 76 percent of Lawrence voters weren't even aware there was a primary, as they were still in a catatonic state of shock from the dual tragedies of losing both Anna Nicole Smith and Brittney Spears' hair in the same month.