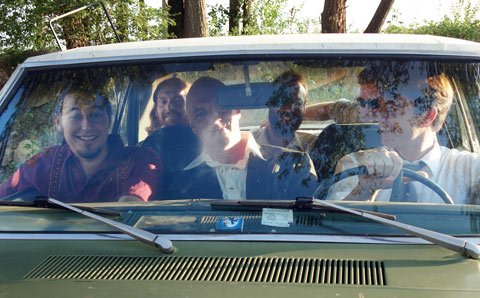 The six members of RedLefty-Jeff Williams (guitar), Dan Rempel (guitar, vocals), Chris Millspaugh (harmonica, trumpet), Nate Craft (trombone, vocals), Sean McCue (upright bass) and Tennyson LeMaster (percussion)-initially came together with the intention of making a blues band. What resulted was a unique melding of vintage American styles and genres designed to set toes a-tapping and get bodies to swinging on the dance floor.

Street Level dodges a pack of medium-sized watchdogs to crash a RedLefty practice session and get the poop on head tunes, the sartorial imperative and the notion that evolution is always an improvement.

lawrence.com: What's in a name?

Dan: Both Sean and Chris have red hair and are left-handed.

Did you unite because you were all swing aficionados?

Jeff: No. I play bluegrass, actually. In the framework of our songs, it'll be like the swingingest jazz song and I'll bust out some honky tonk guitar.

Dan: When we started out, it was a blues band, basically. Every additional member changed it. And then Nate with the trombone changed the whole thing.

Nate: Lester Young and a couple of other guys from the Count Basie Orchestra, they have some recordings that were done in Kansas City and are really beautiful. Real simple head tunes and shout blues.

Dan: Play the melody once, everyone takes a solo, then back to the melody at the end.

Tennyson: You come back around to the head after the solo.

Your music is truly a hybrid.

Chris: Holy cow; there's so much stuff in our music. We all like different things. Jeff likes bluegrass, Nate brings in jazz and I like vintage blues. Dan likes Willie Nelson, too. Tennyson's a punk rock drummer and Sean's played in honky tonk bands, bluegrass bands:

Tennyson: As we've evolved, Chris' harmonica has taken the place of the clarinet in all the old swing bands. He fills that space with the harmonica, which gives us a unique sound-a big band sound.

Are more uniquely American forms of music slipping into the mainstream again?

Tennyson: Swing has never died; there have always been good swing bands around. Sometimes you have to seek them out, sometimes there's a wave. The Brian Setzer Orchestra, a few years ago, kind of brought swing back to the public's attention. But there have always been good swing bands-we hope to be one of those. We're not trying to be rock stars-we want people to have a good time and dance as much as possible.

Jeff: Our music is more about listening to musicians. For me, I'm just trying to play something interesting every time.

Nate: Some people listen to music because they want to emote-they want to experience an emotion. We're not doing that-we just want to play stuff that swings. It's probably better live than recorded.

Where do you want to go with it?

Dan: For me, the short-term goal is just to be a working bar band. Get guarantees and make money at every gig.

Tennyson: What's already happening is that we're getting word-of-mouth parties and weddings. That's what this band is really suited for-a party, where everybody's ready to celebrate. Playing a concert where everybody's sitting down doesn't suit us so well.

Chris: We're taking our time, working our songs out to where they're really tight, and building our repertoire. Once we're really tight and have enough material, watch out.

I've been lucky enough to play at a blues jam session with a lot of these guys. They are the most encouraging, positive, and talented musicians you will run into. Good people, good music.