Grad student Cody Charles hopped from major to major, college to college, before settling-almost reluctantly-on studying education at KU. Soon after moving from Houston to Lawrence last year Charles noticed a peculiar absence within the campus community, and in the process of addressing it has stumbled across an unexpected calling. "I saw that KU had no official AIDS awareness week, but we are looking to change this," says Charles. He, along with co-chair Tyrone Brown, established the 15 Seconds Campaign with the hope of transforming KU into an HIV/AIDS awareness epicenter. Starting from scratch, 15 Seconds (referencing the grim statistic that every 15 seconds someone under the age of 25 is infected with HIV) built a full week of activities from March 26th to March 31st meant generally to educate and specifically to support the Douglas County AIDS Project (DCAP). These varied programs, ranging from a screening of "Philadelphia" to a campout on Wescoe Beach, are free of charge but will encourage donations for DCAP. Cody Charles and DCAP Education and Outreach Coordinator Heath Harding joined us to talk about 15 Seconds and Frenchie Davis' boobs.

Listen to the audio version of this interview 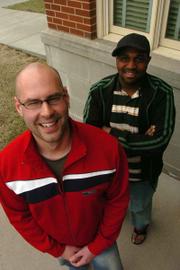 Cody Charles: Well, going on the basis of why we're doing this program, every 15 seconds someone under the age of 25 is infected by this virus. As far as why college students need to know this information, that is why.

What's the state of HIV infection rates and AIDS awareness in Douglas County?

Heath Harding: It depends on which population you're looking at, if the rates are dropping or not:for heterosexual women, some of the rates are actually rising. Specifically for minority populations-because the stereotype is that only gay, white men get HIV and AIDS-a lot of people are not protecting themselves.

Have people become too complacent?

Heath: They have. I think with the medications that are available now, we don't have large numbers of people dying. People continue to die, but it's very quietly. People are not taking it as seriously.

You're hoping to reverse this trend of apathy with 15 Seconds?

Cody: Absolutely. I can't think of a better place to start than at a college campus where the lifestyle of a college student really needs to be evaluated, looking at the decisions that they're making now and how it really affects their future.

The marquee event of the week is a concert on Friday at Hashinger Hall by Frenchie Davis, infamous "American Idol" contestant who was disqualified for having taken racy photos. How were you able to snag this icon?

Cody: (Indignant) First of all, let me address her issues on "American Idol," the hit television show, Season 2! She was very upfront with the "American Idol" family in letting them know she had taken risque pictures. She was in lingerie, she was fully clothed-she did that to pay some tuition, to pay some bills!

And who hasn't been in that position? The whole week seems to be reality TV heavy, with not only Frenchie Davis but also Jus Rhymes from "The White Rapper Show":is there a trend?

Cody: Yeah, and let me tell you why-they're cheap, but still celebrities. It's a good way to get some other people out (who wouldn't normally attend). Frenchie worked very well with me. She was extremely nice. I contacted her through Myspace.

There's going to be a poker tournament on Saturday at McCollum Hall?

Something useful finally comes out of poker and basketball. Why should people attend the 15 Seconds Campaign events?

Heath: I think it's great for everybody to increase their awareness of HIV. A lot of people aren't that aware. It's also a great opportunity to come out and hang out with a lot of fun people throughout the week. It's just a really great opportunity to build up to the April 7th AIDS Walk for DCAP.

Cody: I'm just hoping that people are wanting to be proactive about this disease. It's really easy to learn about it later, but at that time it might be too late.