Most satisfying moment: Taking out Thesius

Don't get me wrong, I absolutely love my PS3, Wii, and Xbox 360. However, none of these three systems have provided me with a gaming experience as satisfying as the PS2's God of War II. It's an awe-inspiring masterpiece that serves as an amazing swan song for the system.

Topping the 2005 original is no easy task. David Jaffe and his talented team at Sony crafted one of the greatest (if not the greatest) action games of all time. Every aspect of the production was stellar, whisking gamers through a brief but fabulous cinematic experience.

My one major complaint with the original was the lack of boss fights. It teased you at the beginning by putting you up against a massive Hydra boss battle, making you think you were in for many more. Unfortunately, there were only three or four true boss fights throughout the course of the game. There were many moments that would have been great times to throw in a gigantic beast, but you usually just had to fight a bunch of standard enemies.

To say God of War II remedies that problem would be an understatement. It features a large amount of boss battles, against foes both massive and human-sized. Each battle seems to come at just the right time, as the pacing of the game is nothing short of perfect. It features many puzzles, standard enemies, boss fights, and platforming segments, all spaced out wonderfully. Just when you're all puzzled-out, the game throws you into a big fight or one of its trademark interactive cinemas.

Standard combat was without flaw in the original game, so it's hard to expect much more from this installment. It's still as sharp as ever, and there's even more insane attacks you can pull off with Kratos' blades. The L1 attacks in particular are both useful and amazing to look at.

Completely new to the series are the flying segments. There are a couple sequences that involve Kratos riding a flaming Pegasus, and they're a nice (albeit slightly underdeveloped) addition. You can perform your standard attacks, as well as jump onto nearby enemies to deal a final blow.

The original offered up a sword, but it wasn't of much use compared to your main weapons. GOWII gives you a spear, a hammer, and the Blade of Olympus. The former two are only slightly better than the original's sword, but the Blade is actually extremely useful (and very important to the narrative). Each can be leveled up, but you'll want to focus your red orbs on your main weapons, the Blade, and the magic attacks of your choosing.

My favorite addition to the gameplay is definitely the improved Rage meter. In the original, it took forever to fill up, and couldn't be stopped once you activate it. Even if you killed all the enemies in the area, you had to just watch as the rest of your meter depleted. In GOWII, you're free to start and stop it at will. If you just need it for a couple of seconds, you can stop it whenever you wish to salvage the remaining power. 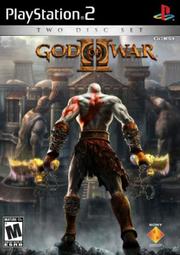 Throughout the entire 8-10 hour experience, there isn't a single moment that takes you out of the game. There are virtually no load times, and action blends into cutscenes seamlessly. You'll most likely die several times on your first playthrough, and the game is always good at sending you back to a reasonable point (not too close, not too far).

Visually, God of War II pushes the PS2 like I've never seen before. I'd say it exhibits the best visuals seen on the system by far, and it's highly doubtful that any future titles will surpass it. The camera does a great job of framing the extravagant stages as well, requiring no input from the player. Bosses look fantastic, and even minor motions like Kratos moving from a horizontal to vertical climb are great. The music is just as epic and fitting as ever, rivaled only by the soundtrack of the Metal Gear Solid series. All of the voice-acting is spot on, even down to the no-name soldiers.

If you own a PS2, it would be an absolute crime not to buy God of War II. Like the first, it's a relatively short experience, but it's easily amongst the top five on the system. Every single aspect of the title exhibits an extraordinary amount of production value, and it's stellar on both a gameplay and narrative level. I wouldn't want the PS2 to go out in any other way.