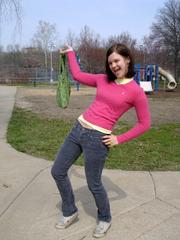 Well, it was the Casbah, but sadly, they closed. The Gap because they have good sales, cute skirts, and long socks. I got a pair of jeans there for like $4 once.

Au Marche for their candy selection and all their unique items you just can't find anywhere else. And it's maybe not really a store, but Sylas and Maddy's for obvious reasons.

Serious and classy. But when it's laundry day, anything but gaucho pants.

I like different colored tights and baby-doll dresses, even though I don't own any.

Cheetah print-well, that could be OK. Oh, definitely metallic jackets and purses. Girls wearing leggings without anything over them. I see girls wearing this style more than you'd think.

Z Cosmetology. They're cheap, but it's like going to a salon.

La Prima Tazza for the atmosphere, the two-for-Tuesdays, and delicious chai.

I don't really know, I can only really get in to go to shows. I've been to shows at the Bottleneck and the Granada-The Decemberists and Sleater-Kinney!

Yellow warblers. I saw one in a tree outside Lindley once, and I figure it must have a family.

Bad drivers. Because I've almost been killed by them too many times, especially on campus.

Ballerinas! Who wouldn't dress like that all the time if they were allowed to?

Yeah, even though I'm leaving the country next year...

Well, this past month is evidence that I would buy food.