No Style: But all the substance

Konami's Winning Eleven Pro Evolution Soccer 2007 is the latest edition to the much revered Winning Eleven franchise. The series has gone by many names around the world and on various consoles, but its signature quality gameplay has tied them all together over the past 13 years. Sharing both the Winning Eleven Japanese/U.S. title and the Pro Evolution European/Australian titles for the first time, Konami's football title has always been the absolute best playing soccer game on the market and that fact hasn't changed with this edition of the game. In fact, very little has changed in Winning Eleven 10 err... Pro Evolution 2007, from its PS2 counterpart as this is practically a perfect port of that game.

Right from the get-go you are given Pro Evolution's relatively generic menu presentation. It is really quite bland, but it works. However, once you get inside you discover some omissions from past games as far as licensed teams, stadiums, etc. I was particularly disappointed to see that the German Bundesliga license had not been retained for 2007 but perhaps only someone who had grown up in Germany as I have would appreciate this. Bayern MÃ¼nchen is still available as an "other" team, but this storied club can't make up the difference for the loss of the league. I also noticed a lack of customization features that, oddly enough, are available on the PS2 version. If this were a launch title, I could understand the omission, but we are nearly 17 months removed from launch so it really doesn't make any sense. 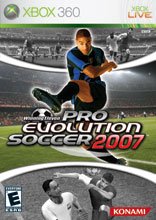 Graphically speaking, it is what you would probably expect by now, a slightly improved PS2 port. While nothing really appears glaringly bad, it can't hold a candle to some of the other 360 sports titles out there such as the NFL and NBA offerings from EA & 2K Games, much less EA's FIFA title. Player models are still rather blocky in appearance and the texture work, especially on the field during close up moments, is horrendous for a next gen title. With that aside, the animation work is as fluid as ever, with very realistic looking player movements and reactions.

The music hasn't changed much. It is basically what you might expect to hear in a Hungarian techno club. The fan reactions to the gameplay are synched quite well, with wild cheering when a ball is taken away or a player nears the penalty box. The color commentary, provided by Peter Brackley and Trevor Brooking is an area where many games tend to over do it, but it actually does a good job of adding to the game's atmosphere. Thinking back to previous titles, the commentary used to stack as each play occurred, often resulting in comments like, "He's stolen the ball!" long after he's already lost the ball and is chasing the opposing player down field, so it is good to see the corrections in 2007.

Online play via Xbox Live compliments this package well, offering all the options available in the single player game, plus league and cup play. It uses the same presentation style of the rest of the game, making it very simple and to the point, with nothing special to write home about. Jumping into a game is extremely quick and easy however, so there is really nothing to complain about here.

Of course, the primary ingredient in every Winning Eleven title is the gameplay. You shouldn't be surprised by now to hear that you absolutely cannot get a better, more realistic video game soccer experience anywhere else. While FIFA has surpassed Winning Eleven in graphics, licenses, presentation, audio and more, they have still not topped Konami's excellent soccer realism. The player's movement is fluid, the controls spot-on, and strategies can be created on the fly. The difficulty settings are appropriately tuned as well, so it is really quite easy to jump in to a well matched game and have fun. The only noticeable slant I can offer is that it really hasn't improved any from Winning Eleven 8 or 9 on the PS2/Xbox. The argument can certainly be made that you can't improve perfection, but that isn't quite the truth.

I still become highly annoyed that the player moves will stack, which is a difficult impulse to control on the part of the gamer. Let's say you want to make a lateral pass to a teammate and then quickly shoot, all in the heat of the moment. Your player will be running down field and when you are about ready, you quickly start tapping "A" to pass, then wait for the teammate to receive the ball before hitting "X" to shoot. Well, if you tapped "A" more than once when you were trying to pass, the game will remember that and quickly order the teammate to try to pass it again, and if it is received by another player, he will try to pass as well depending on how many times you hit "A" over and over again. Or another example, if you are running down field with the ball and you see an opposing player coming up on you trying to steal the ball, you might decide to try to lob the ball into the penalty box so a teammate can head the ball in. So you tap "B" to lob, but before you know it ,or can see it very well, the opposing player has taken possession of the ball and your tapping "B" just reverted to the defensive play of slide tackle, taking your opponent out from behind and earning you a red card. So, before you know it, you've lost a whole player/position from the game permanently and severely disabled your team.

Frustrations aside, those are about the only complaints I can make about this game as far as the way it plays. I for one, am willing to accept the faults if the gameplay is still there. FIFA has come a long way in catching up with Konami's revered franchise, but until it can sport better gameplay, it'll always play second fiddle. Expect a much improved, "real" next gen effort with the next edition which will likely appear only on the PS3/Xbox 360 where we'll get a graphical overhaul, hopefully some new licenses and gameplay tweaks. Overall I'd call this a very lackluster next gen effort, but it is still Winning Eleven, and if you need a new soccer fix right now, then this is certainly the game to get.