When last we spoke with Nancy Boyda, she was waging a quixotic campaign to represent Kansas' 2nd Congressional District-including Lawrence-as a grass-roots Democrat in a blood red state. In one of the biggest upsets during last November's upset-rich elections, Boyda managed to unseat entrenched Republican Congressman Jim Ryun and garner national attention for our sleepy little district. She's been assigned chairs on the powerful House Armed Services and Agriculture committees and, along with this heightened profile, is already being targeted for political reprisal by the Republican Party in '08. Representative Boyda took some time out of her busy schedule to give us a follow-up report on her new gig in Washington.

When last we spoke with Nancy Boyda, she was waging a quixotic campaign to represent Kansas' 2nd Congressional District-including Lawrence-as a grass-roots Democrat in a blood red state. In one of the biggest upsets during last November's upset-rich elections, Boyda managed to unseat entrenched Republican Congressman Jim Ryun and garner ...

No-fi excerpts from the podcast

lawrence.com: You voted for the supplemental Iraq funding bill, calling for a timetable to bring the troops home, that President Bush recently vetoed:what's the next step for Democrats in the Iraq debate? A "clean" funding bill or another attempt to draw down troop levels?

Rep. Nancy Boyda: I'm not quite sure where it's going to go from here. We cannot give President Bush $243 billion without some accountability along with it. You know, that's just not too much to ask:I think everyone agrees-and I certainly believe-we need to fund the troops, but we cannot continue to sustain this level of war. Our man-power and our equipment are virtually at a point where we are not able to respond if something were to happen here in the U.S. or overseas. That's just nuts. The world is getting more and more dangerous every day and we're becoming more and more flat-footed:and, by the way, the enemy knows that. What originally got me into all of this is the safety of my own family. I think we're less safe today than we were even a year ago. If we don't pull back very responsibly, redeploy those troops and start resetting the military, I think we're going to be even less safe.

Are you perversely flattered that the National Republican Congressional Committee perhaps considers you to be their No. 1 target next year?

No, I'm not perversely flattered. What I really try to do is keep my head down and do my job. I'm really loving the actual job of being in Congress and seeing what we can do to make a difference. I've already done things that I never dreamed I'd be able to do. The leadership on the Democratic side is extremely interested in what the heck is going on in Kansas. "How did you get here? What's going on in people's hearts and minds?" I feel like I've had a real impact.

You've again turned down money from the Democratic Congressional Campaign Committee:can you raise the resources you need for re-election using another grassroots campaign?

It's certainly going to require fundraising and I'm not unaware that we're way above the radar screen. We stayed way below it last time. That was part of how we could be effective. This time we don't have that luxury. It will be a very, very difficult race this time, but people in Kansas are still expecting me to be who I am and not what Washington is. I'm going to do a vast majority of my fundraising-not all, because I can't put myself at a total disadvantage and let them walk over me-but my priority will be fundraising in Kansas. One of my goals is cleaning up Congress. I think within a few weeks we're going to start doing some campaign finance reform that actually might start doing more about bundling money, about Washington fundraising:I'm really, really excited about that.

Do you have a favorite candidate for the Democratic presidential nomination? 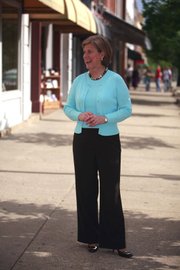 What was the biggest culture shock when you first arrived in Washington? Is it really the cesspool of lobbyists and high priced escort services we're led to believe?

Well, I haven't had any dealings with the high priced escort services, but what if I just said, "No, it hasn't been that way"? The vast majority of the Democrats I have gotten to know, to me, really seem to be there for the reasons that they went there in the first place.

That has been a surprise to me. I wasn't expecting to really like politicians. They're people that I've grown to really like and deeply respect. Nancy Pelosi-they're doing everything they can to demonize her and to make her into some West Coast liberal. In fact, she's had five children in six years. She's passionate about taking care of veterans. I am impressed with her and it just irritates the living daylights out of me how they're trying to demonize her. In smaller meetings, the woman quotes scripture and talks about her faith:she does not put Jesus Christ on her sleeve and go out with some sense of self-righteousness. She just knows where she's going and it's about taking care of people.

Should "No Child Left Behind" be completely overhauled?

It should be fixed and funded, or let states opt out of it. I don't want our state to opt out of it, but if it isn't really fixed with some good funding put behind it, it's absolutely going to kill our schools.

Do you support a "Guest Worker" program for illegal immigrants?

No. It is a big deal in my district and I took a position in the campaign that basically said, "We need to enforce our laws, protect our borders, and, by the way, please don't send me hateful e-mails and please don't speak to me hatefully about any group of people." Unfortunately I had to add that third part because the rhetoric got ramped up to where I was uncomfortable with it. You put together a "Guest Worker" program and you've basically created another class of people who are here still working in the shadows without a lot of rights.

Do you favor some form of universal health care?

Universal health care is something we need to look at. Right now, the insurance companies and the pharmaceutical industry really are dictating where our policy goes:I think we could put together a system that works better.

A matter of Kansas pride, Rep. Dennis Moore has said he won't appear on "The Colbert Report." If asked, would you?

No. I just don't need that kind of grief.

But you're going to have Colbert saying Kansas doesn't have any balls!

Well, gee whiz (chuckles) :let me take that under advisement.